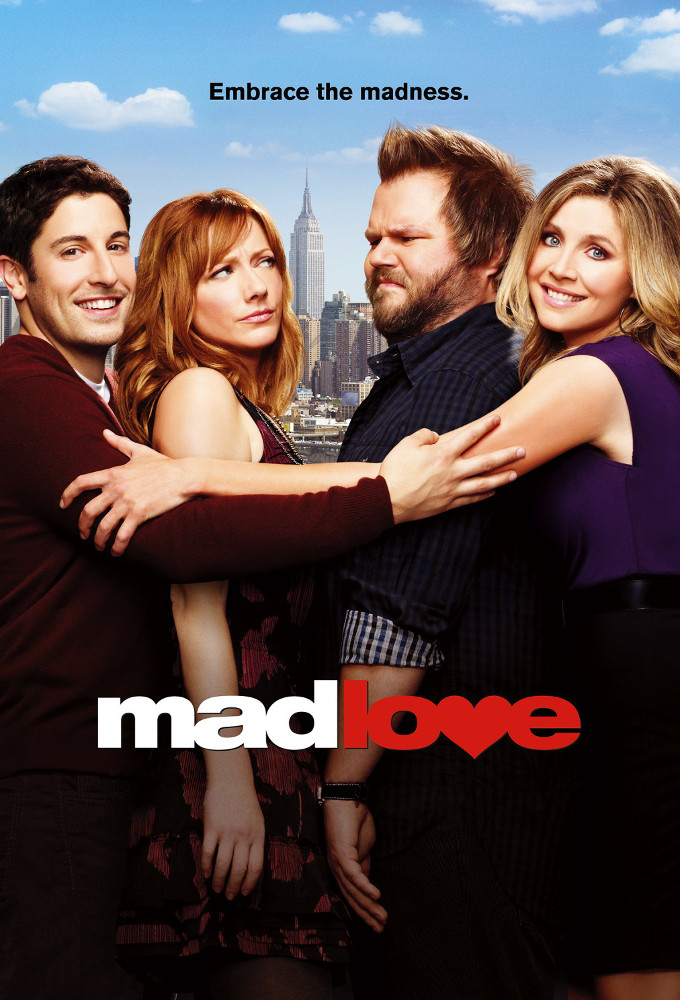 (2011)
Originaltitel: Mad Love
Skapad av: Matt Tarses
Release: 2011-02-14
TV-bolag: CBS
Längd per avsnitt: 30 min min
Status: AVSLUTAD
MAD LOVE is a comedy about a quartet of New Yorkers - two who are falling in love and two who despise each other... at least for now. Ben, a lawyer, is a hopeless romantic trying to build a relationship with Kate, a beautiful, smart girl whom Ben thinks is the woman of his dreams. Larry, Bens unrefined best friend and co-worker, is a guy who doesnt believe in love and has a long track record as the third wheel. Connie, Kates roommate, works as a nanny and finds Larry aggravating... or... (TheTVDB)
Komedi

1
SÄSONG 1

1
Fireworks 2011-02-14
Fireworks
2011-02-14
When Ben Parr and Kate Swanson accidentally meet at the top of the Empire State Building, they make a date for later that evening and each bring along their best friends, Larry and Connie, who instantly despise each other.
Regisserat av:

3
The Kate Gatsby 2011-02-28
The Kate Gatsby
2011-02-28
Ben gives bad advice to Kate not realizing that the advice could ruin a friendship that Kate and Connie have as well as the party being planned for Kates birthday.
Regisserat av:

8
Paw & Order 2011-04-11
Paw & Order
2011-04-11
While Larry intrudes on Connies dates with Officer Barrett in an attempt to get out of a traffic ticket, Kate fears for her job when she accidentally loses her bosss dog.

9
Pub Quiz 2011-04-18
Pub Quiz
2011-04-18
An obnoxious client forces Ben and Larry to jump through hoops before he gives them his business. Larry risks the account - and his friendship with Ben - by choosing to participate in the bars annual Pub Quiz instead.
Regisserat av:

10
The Young and The Reckless 2011-04-25
The Young and The...
2011-04-25
When Ben and Kate each worry that theyre not fun enough for the other, a spontaneous outing leads to disaster. Meanwhile, Larry tags along with Connie so he can find a chance to hit on her friend.

11
The Secret Life of Larry 2011-05-02
The Secret Life of...
2011-05-02
When Larry loses Connies camera, she follows him around New York as he retraces his steps, but when they reach the end of the trail, Connie discovers theres more to Larry than she thought.

12
Friends 2011-05-09
Friends
2011-05-09
When Tiffany decides to leave New York because of her divorce, it means Connie must find a new job and Larry finally has a chance with his dream girl; however, they soon each get more than they bargained for.