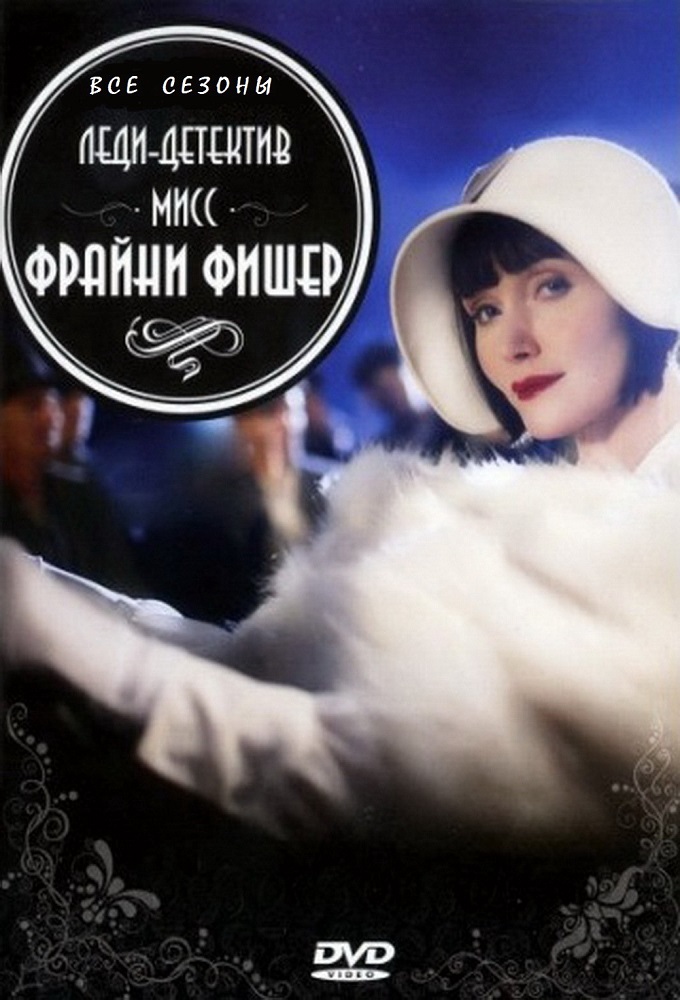 (2012)
Originaltitel: Miss Fisher's Murder Mysteries
Release: 2012-02-24
TV-bolag: ABC1
Längd per avsnitt: 60 min min
Status: AVSLUTAD
Miss Fishers Murder Mysteries is based on the novels of Australian author Kerry Greenwood. Our lady sleuth sashays through the back lanes and jazz clubs of late 1920’s Melbourne, fighting injustice with her pearl handled pistol and her dagger sharp wit. Leaving a trail of admirers in her wake, our thoroughly modern heroine makes sure she enjoys every moment of her lucky life. (TheTVDB)
Drama Mysterium

2
Murder on the Ballarat Train 2012-03-02
Murder on the...
2012-03-02
The glamorous Phryne Fisher, accompanied by her maid Dot, decides to travel to the country by train to collect her new Hispano-Suiza motor car. The charm of rail travel soon evaporates though, when Phryne unexpectedly has to use her trusty pearl-handled pistol to save a young woman’s life and...
Regisserat av:

3
The Green Mill Murder 2012-03-09
The Green Mill...
2012-03-09
Phryne, gorgeous in her sparkling evening gown, had thought she would dance the night away at the hottest dancehall in town, the Green Mill. That was before death spoiled the evening. In jazz-mad 1920s Melbourne, Phryne finds there are hidden perils lurking in the smoky shadows – like a mystery...
Regisserat av:

4
Death at Victoria Docks 2012-03-16
Death at Victoria...
2012-03-16
A young man with a blue tattoo lies cradled in Phrynes arms. Sadly, its not another scene of glorious seduction. This time its murder. Outraged by this brutal slaughter, Phryne promises to find out who is responsible. But Phryne doesnt yet know how deeply into the mire shell have to go – bank...
Regisserat av:

5
Raisins and Almonds 2012-03-23
Raisins and Almonds
2012-03-23
When a young man is found dead in a bookshop at the Eastern Market, Phryne Fisher is plunged into the diverse worlds of Jewish politics, alchemy, and poison. She works her way through the mystery with help from the old faithfuls – Bert, Cec, Dot, Dr Mac and Detective Inspector Jack Robinson....
Regisserat av:

6
Ruddy Gore 2012-03-30
Ruddy Gore
2012-03-30
At a gala performance of Gilbert and Sullivans Ruddigore, Phryne Fisher meets the gorgeous Lin Chung who has rescued the theatre’s leading man from some thugs in a dark alley in Chinatown. The evening continues on unexpectedly with a bizarre death onstage. What links can Phryne find between the...
Regisserat av:

7
Murder in Montparnasse 2012-04-06
Murder in...
2012-04-06
As a young woman in Paris after the war, Phryne posed for the famous artist Pierre Sarcelle. Now, 10 years later, Sarcelle’s widow arrives in Melbourne asking for her late husband’s paintings. When she suddenly disappears, Phryne discovers the connection between Mme Sarcelle and the death of an...
Regisserat av:

8
Away with the Fairies 2012-04-13
Away with the...
2012-04-13
Phryne investigates the puzzling death of a magazine columnist and author of fairy stories. To get to the truth, she must unearth the deceptions and rampant rivalries of the magazine’s thoroughly modern working women – and dig into the past of their token male employee. Meanwhile, Phryne...
Regisserat av:

9
Queen of the Flowers 2012-04-20
Queen of the Flowers
2012-04-20
The Honourable Miss Phryne Fisher has been chosen to refine a group of delinquent flower maidens for the annual flower parade. When the body of one of her charges washes up on the beach, though, she begins to question the worth of table manners and dancing lessons. In the midst of her...
Regisserat av:

10
Death by Miss Adventure 2012-04-27
Death by Miss...
2012-04-27
Phryne investigates the death of a young female worker in a factory ‘accident’ and soon learns that the woman’s death might not be the misadventure the police think it is. Faced with a wall of secrecy and lies, Phryne sends her trusty maid, Dot, undercover into the factory to investigate....
Regisserat av:

11
Blood & Circuses 2012-05-04
Blood & Circuses
2012-05-04
The carnival is in town. Innocent fun turns to horror when one of the sideshow acts is murdered. Phryne poses as the magician’s assistant, Fern, to investigate. The heady atmosphere of the carnival takes Phryne on a bittersweet trip down memory lane – to the days when she and her sister, Janey,...
Regisserat av:

12
Murder in the Dark 2012-05-11
Murder in the Dark
2012-05-11
Phryne’s cousins and Aunt Prudence’s entire household come under suspicion when a young girl is found drowned in her aunt’s fountain on the eve of a lavish fancy dress party. Phryne and her aunt work together to investigate – until Phryne begins to doubt her own detecting skills. Was...
Regisserat av:

13
King Memses Curse 2012-05-18
King Memses Curse
2012-05-18
Murdoch Foyle is at large and has been connected with the mysterious death of Albert Monkton, antique dealer. In investigating the murder, Phryne discovers Murdoch Foyle’s involvement in a bizarre reincarnation cult, inspired by Ancient Egypt. Phryne’s hunt for the madman leads her on a...
Regisserat av: