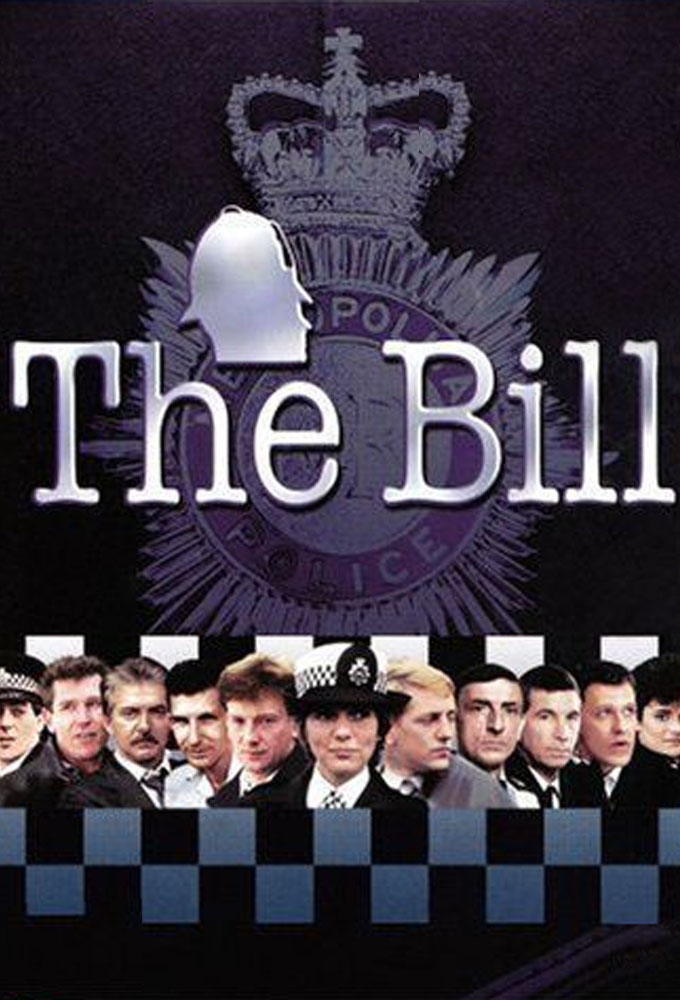 (1984)
Originaltitel: The Bill
Skapad av: Geoff McQueen
Release: 1984-10-16
TV-bolag: ITV1
Längd per avsnitt: 50 min min
Status: AVSLUTAD
The Bill follows the officers of Sun Hill, a Metropolitan Police station located in the fictional Borough of Canley in Londons East End. Created in 1983 by Geoff McQueen as a one-off drama called Woodentop, The Bill was spun off as a full series, and ran for over 26 years and 2400 episodes. Covering both uniformed officers and CID detectives, the series is renowned for its accurate and authentic portrayal of policing in London. (TheTVDB)
Crime Drama

2
A Friend In Need 1984-10-23
A Friend In Need
1984-10-23
D.I. Galloway places a bet with Sgt. Cryer that he can solve a case involving verbal threats made to a number of restaurants, which the Home Office believes may be racially-motivated. P.C. Carver is accused of stealing a drunken journalists wallet when he and probationer P.C. Higgins arrest the man.
Regisserat av:

3
Clutching at Straws 1984-10-30
Clutching at Straws
1984-10-30
A young boy is assaulted by a gang of thugs, and although he is reluctant to press charges, his brother decides to take matters into his own hands. Det. Sgt. Roach investigates an indecent assault and attempted abduction outside a school, but the attacker manages to get away. P.C.s Litten and...
Regisserat av:

4
Long Odds 1984-11-06
Long Odds
1984-11-06
P.C. Litten recognises a photo of a wanted armed robber, but takes the information to D.I. Galloway instead of Sgt. Cryer, and gets into trouble with both men. Meanwhile, a gang of thugs is robbing local shopkeepers, and P.C. Edwards purses a mugger into a derelict building and is trapped when the...
Regisserat av:

6
The Drugs Raid 1984-11-20
The Drugs Raid
1984-11-20
After a residents meeting complaining about the drug problem on their estate, DI Galloway mentions that he had heard that an old illegal club has reopened in an abandoned theatre complex - this time dealing drugs. He asks a parent, Tombo Robinson, who used to be involved in the club, if he will...
Regisserat av:

7
A Dangerous Breed 1984-11-27
A Dangerous Breed
1984-11-27
PC Dave Litten is on secondment to CID, and is desperate to impress his boss, DI Roy Galloway. Galloway and Litten are about to have a meal at the local pub when a call comes through that a valuable necklace has been stolen from a local aristocrat, Lord Barstow-Smythe. Traffic problems hold them...
Regisserat av:

8
Rough in the Afternoon 1984-12-04
Rough in the...
1984-12-04
PC Carver and PC Edwards are called to a domestic and are informed by the neighbour that a child was taken by his father. Meanwhile, the mother has turned up at the station to report the abduction in person.
Regisserat av:

10
Death of a Cracksman 1985-01-15
Death of a Cracksman
1985-01-15
Alfie Mullins is a non-returned prisoner, not a dangerous prisoner as reported. He is an old-fashioned safe-cracker who, just as he is returning to the prison, is approached by one of a gang of thieves who want Alfie to open a safe they pinched. While they are talking Alfie is accidentally killed....
Regisserat av:

11
The Sweet Smell of Failure 1985-01-22
The Sweet Smell of...
1985-01-22
A tip in a counterfeit perfume case pulls in two very old aged pensioners who appear to have been pinching things since WWII. But after leading Carver and Ackland in a merry chase it turns out they arent the real culprits.
Regisserat av: