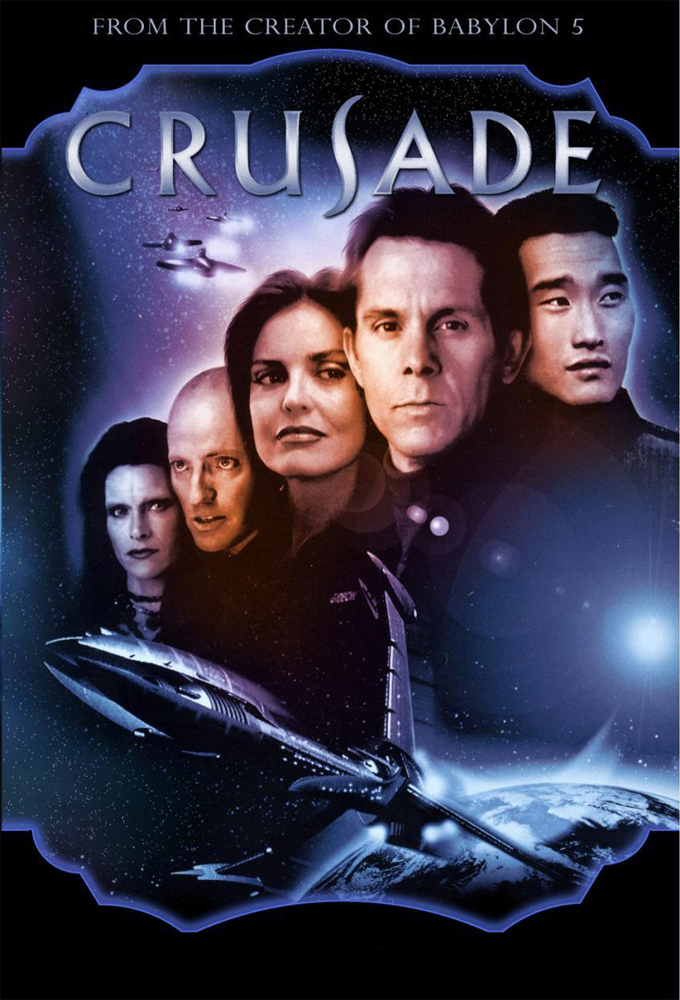 (1999)
Originaltitel: Crusade
Skapad av: J. Michael Straczynski
Release: 1999-06-09
TV-bolag: TNT
Längd per avsnitt: 45 min min
Status: AVSLUTAD
Crusade, a spin-off from the Emmy-winning Babylon 5, describes the efforts of the Interstellar Alliance vessel Excalibur to find the cure to a plague released on Earth. This plague of nano-viruses, released by the Shadows servants the Drakh in retaliation for the Shadow War (see Babylon 5 movie a Call to Arms for details), will kill all mammalian life on Earth within five years if the cure is not found. Unfortunately, the plug was pulled on this series after just 13 episodes, so no... (TheTVDB)
Drama Science-Fiction

1
SÄSONG 1

1
War Zone 1999-06-09
War Zone
1999-06-09
Captain Matthew Gideon is assigned to the prototype destroyer Excalibur, to spearhead the search for a cure to the plague unleashed by the Drakh. His first mission is to seize a downed Drakh craft on Ceti 4.
Regisserat av:

2
The Long Road 1999-06-16
The Long Road
1999-06-16
The Medusa has been stationed around Regula 4, supporting miners who seek a mineral which extends human life by fifteen years. It seemed a simple job, as the colonists are the descendants of people who subscribed to a Back-to-Nature belief; they should have posed no problem for the technologically...
Regisserat av:

3
The Well of Forever 1999-06-23
The Well of Forever
1999-06-23
Mr. Jones from the Congressional Panel on Telepaths, has arrived to test Lt. Matheson, to make certain he has not broken any of the new rules for telepaths. Although Capt. Gideon is concerned that this is the second testing in the past six months, Matheson has assured him that these tests are...
Regisserat av:

4
The Path of Sorrows 1999-06-30
The Path of Sorrows
1999-06-30
Enter freely through the Path of Sorrows. A simple directive, but one which stymied Excaliburs scientists until Galen suddenly realized what was being asked. After upsetting Dureena, Galen used her tears to open the way to a mysterious globe. Inside the globe, barely seen, was a reptilian alien...
Regisserat av:

5
Patterns of the Soul 1999-07-07
Patterns of the Soul
1999-07-07
Minutes before reaching the Excaliburs destination, Capt. Gideon was sent by Col. Thompson from Earthforce to find a group of infected colonists at Theta 49. Gideon had argued that there was no need to move the infected people from an uninhabited world, but Thompson forced the Excalibur crew to do...
Regisserat av:

6
Ruling from the Tomb 1999-07-14
Ruling from the Tomb
1999-07-14
The Excalibur is called to Mars for a medical symposium on treating the Drakh plague. Irritated at being called away from his important job, Capt. Matthew Gideon finds himself clashing with the officer in charge of security: Capt. Elizabeth Lochley. Lochley herself is in contention with Carr, the...
Regisserat av:

7
The Rules of the Game 1999-07-21
The Rules of the...
1999-07-21
The Excalibur has come to Babylon 5 to negotiate a landing on Lorca 7 -- a landing that the Brakiri ambassador refuses to allow. Lorca 7 is a re-colonized planet; Capt Matthew Gideon suspects that there might be medical technology in the ruins left by Lorca 7s previous inhabitants.Gideon discusses...
Regisserat av:

8
Appearances and Other Deceits 1999-07-28
Appearances and...
1999-07-28
Two visitors from EarthGov have come aboard the Excalibur to make certain the right impact is made on the panicked people of Earth. But their suggestions are little more than new colors for the wardroom and new uniforms, and Capt. Matthew Gideon is -- to put it mildly -- unsympathetic.But Gideon is...
Regisserat av:

9
Racing the Night 1999-08-04
Racing the Night
1999-08-04
On a world that appears to be dead, the Excalibur discovers equations for propulsion, energy creation, alloy-making -- almost everything but medical technology. Capt. Matthew Gideon is as concerned for a cure as Max Eilerson is ecstatic about their discoveries. Dr. Sarah Chambers, however is more...
Regisserat av:

10
The Memory of War 1999-08-11
The Memory of War
1999-08-11
Four months into its mission, the Excalibur finds a world for which Capt. Matthew Gideon has long been searching. Although the race which once populated it is dead, the world and its edifaces remain intact.Although Max Eilerson is elated -- perhaps now he will find some technology worth exploiting...
Regisserat av:

11
The Needs of Earth 1999-08-18
The Needs of Earth
1999-08-18
The Excalibur receives an important message from the Rangers: an alien race, the Moradi, are searching for a criminal they cannot retrieve easily. Hoping to gain knowledge that will help the Excalibur avoid several years of searching, Capt. Matthew Gideon agrees to find the criminal Natchok Var,...
Regisserat av:

12
Visitors from Down the Street 1999-08-25
Visitors from Down...
1999-08-25
A First Contact situation arises as a nearly-depleted life pod is discovered by the Excalibur. Capt. Matthew Gideon, assisted by Lt. John Matheson, meets with the aliens to establish initial conversation.But the aliens are clad in 20th Century clothing, and speak 20th century colloquial English as...
Regisserat av:

13
Each Night I Dream of Home 1999-09-01
Each Night I Dream...
1999-09-01
The Excalibur is sent to rendezvous with a special courier for top-secret mission. Obeying the Senator -- and his companion, a rather bland little plumber -- Capt. Matthew Gideon proceeds toward Earth. But when the Excalibur encounters a disabled Starfury, Gideon decides to stop and rescue its...
Regisserat av: