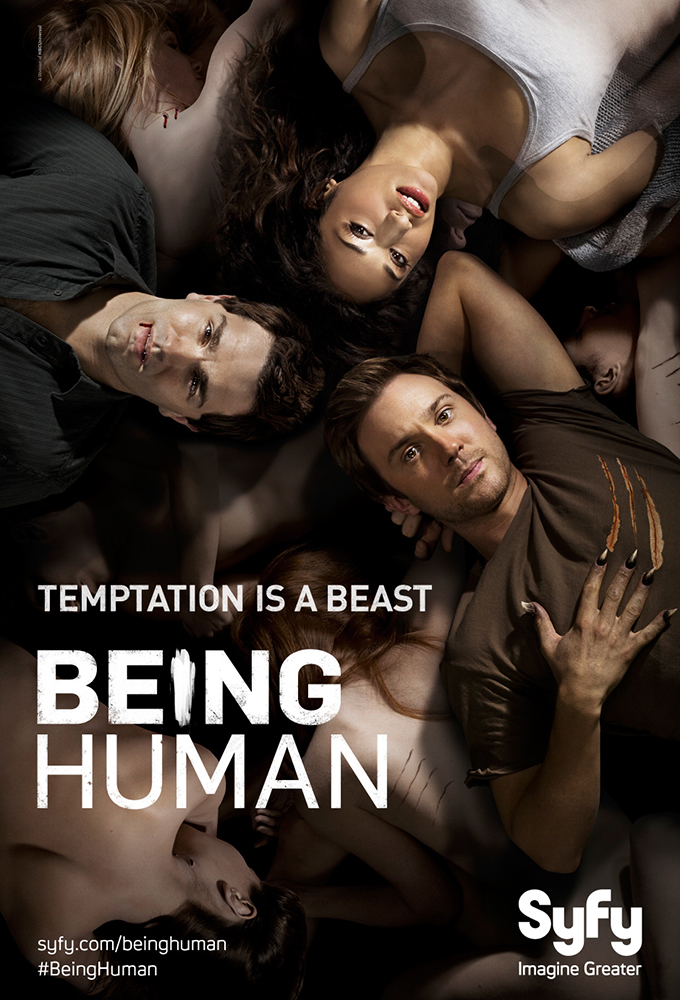 (2011)
Originaltitel: Being Human
Release: 2011-01-17
TV-bolag: Syfy
Längd per avsnitt: 60 min min
Status: AVSLUTAD
This remake follows three paranormal, 20-something roommates (a vampire, a werewolf, and a ghost) living in Boston as they struggle to hide their dark secrets from the world, while helping each other navigate the complexities of living double lives and trying to be human. (TheTVDB)
Komedi Drama Fantasy

1
2
3
4
SÄSONG 1

1
There Goes the Neighborhood (1) 2011-01-17
There Goes the...
2011-01-17
Josh is miserable after his latest full moon transformation resulted in him waking up next to a bloody dead deer in the woods. Aidan suggests that he and Josh should live together so they can watch out for each other. When theyve found the perfect apartment, they realise the place comes with its...
Regisserat av:

2
There Goes the Neighborhood (2) 2011-01-24
There Goes the...
2011-01-24
Sally begs the guys to call Danny over so she can try to make him see her presence somehow. Aidan, while trying to fight off Caras unwanted admiration, receives some shocking news about someone who he thought was dead. Josh discovers Aidans involvement in the Rebecca incident and confronts him...
Regisserat av:

3
Something To Watch Over Me 2011-01-31
Something To Watch...
2011-01-31
Sally meets a ghostly new friend who teaches her how to cross physical boundaries like the apartment. Josh gets roped into the Neighborhood Watch against his wishes. Aidan is recognised by the son of one of his past victims, who is determined to confront Aidan about his fathers murder.
Regisserat av:

4
Wouldn't It Be Nice (If We Were Human) 2011-02-07
Wouldn't It Be Nice...
2011-02-07
Josh meets a werewolf who teaches him how to accept the change and is more than meets the eye. Aidan begins a dangerous relationship with an acquaintance. Sally learns that she needs to stop interfering in the lives of those she left behind.
Regisserat av:

5
The End of the World as We Knew It 2011-02-14
The End of the...
2011-02-14
Aidan has his hands full with a problem created at Bishop’s request. Sally remembers the details that led to her death. Josh learns the truth about the night that led to his change.
Regisserat av:

6
It Takes Two to Make a Thing Go Wrong 2011-02-21
It Takes Two to...
2011-02-21
Aidan receives a “video postcard” from an old friend. Sally takes Aidan up on his offer to “take care of her problem.” Josh’s sister moves in with them which causes problems for the roommates. Josh goes on a date with a nurse from the hospital.
Regisserat av:

7
I See Your True Colors...and That's Why... 2011-02-28
I See Your True...
2011-02-28
Josh has an odd and interesting homecoming. Sally attempts to protect Bridget from Danny but fails. Aidan deals with the aftermath of Marcus attack.
Regisserat av:

9
I Want You Back (From the Dead) 2011-03-14
I Want You Back...
2011-03-14
Bernie is seriously injured in a car accident leaving Aidan to make a tough decision. Josh wants to slow down his relationship with Nora. Sally meets an old crush, who is also a ghost.
Regisserat av:

11
Going Dutch 2011-03-28
Going Dutch
2011-03-28
Rebecca walks out on Aidan; Josh has romantic troubles; Marcus is worried that Bishop suspects he is a traitor and Sally faces off with an exorcist.
Regisserat av:

12
You're the One That I Haunt 2011-04-04
You're the One That...
2011-04-04
After his break from the Family, Aidan is afraid that Bishop will try to hurt him and his friends. At the hospital, he encounters a former lover, who has come to the hospital to die. Josh runs into Nora, and is afraid about possible complications in her pregnancy. Meanwhile, Sally finally finds a...
Regisserat av:

13
A Funny Thing Happened on the Way to Me... 2011-04-11
A Funny Thing...
2011-04-11
Nora finds out the truth about Josh; Sally misses her door, but gains new powers; Aidan has a final showdown with Bishop, with surprising results. We also see how Aidan and Josh first met.
Regisserat av: