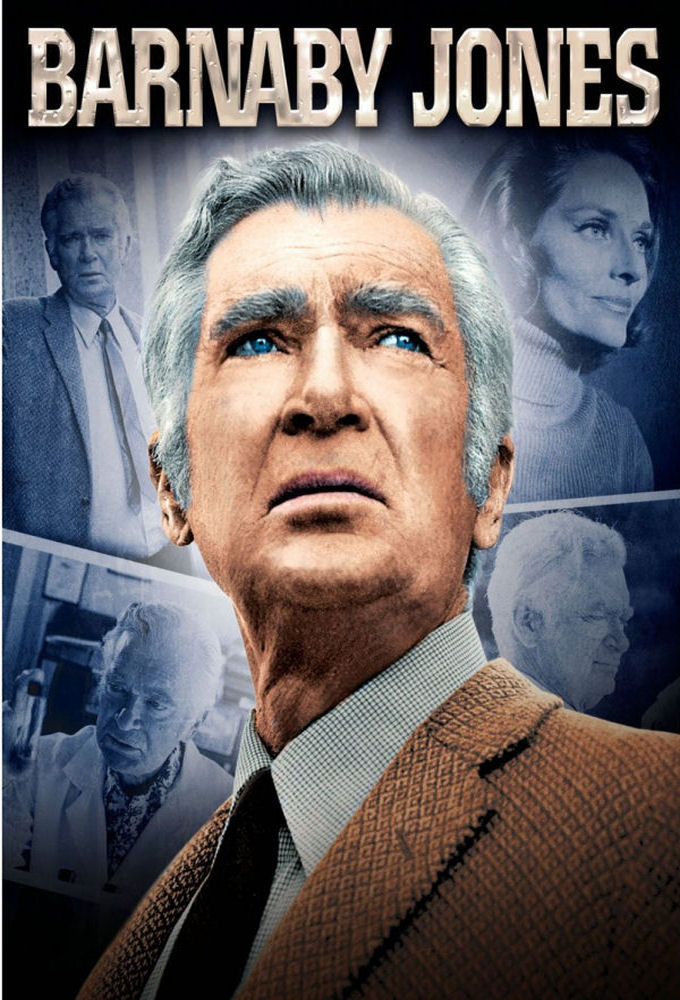 (1973)
Originaltitel: Barnaby Jones
Release: 1973-01-28
TV-bolag: CBS
Längd per avsnitt: 60 min min
Status: AVSLUTAD
Barnaby Jones began as a mid-season replacement for CBS beginning on Sunday, January 28, 1973, and continued with a successful run until its final episode aired on Thursday, April 3, 1980. 178 color episodes were filmed in Hollywood. This series focused around a retired private detective, Barnaby Jones, who had passed his private investigation business to his son, Hal. When Hal was murdered while on a case, Barnaby came out of retirement to track down his sons killer. Hals widow,... (TheTVDB)
Drama

1
2
3
4
5
6
7
8
SÄSONG 1

1
Requiem for a Son 1973-01-28
Requiem for a Son
1973-01-28
After his private detective son Hal Jones is shot, retired Barnaby Jones decides to solve the murder with the help of Frank Cannon. They find out that Hal was working for Terry McCormack, who seeks a career in politics but is blackmailed now.
Regisserat av:

2
To Catch a Dead Man 1973-02-04
To Catch a Dead Man
1973-02-04
Wealthy married Philip Carlyle persuades unwitting Mike Hartney to sail his cabin cruiser with a time bomb aboard. After the explosion Phil is believed to be dead and can begin a new life with his mistress Diane. Julie hires Barnaby to search for her friend Mike.
Regisserat av:

3
Sunday-Doomsday 1973-02-25
Sunday-Doomsday
1973-02-25
Just released Howard Lee meditates revenge on Barnaby Jones who put him into prison. He sends a funeral wreath, predicts Barnabys death on Sunday and is constantly watching him. When Betty finally finds out who threatens Barnaby she falls into Lees hands.
Regisserat av:

5
Perchance to Kill 1973-03-11
Perchance to Kill
1973-03-11
Tony Bloom accuses his associate Steve Kingston of a theft and of having an affair with his wife. Steve kills Tony pretending an assault by two hippies. Barnaby is hired to find Christie and her hippy friend Eric who will be arrested under suspicion of murder.
Regisserat av:

7
Murder in the Doll's House 1973-03-25
Murder in the...
1973-03-25
While working on a revealing book Harry Doyle is killed. Looking for the missing writer and his manuscript Barnaby meets Harrys friend Nancy. Finally he spots the missing pages in the dolls house of Craig Woodridges aunt. Does Craig have a shady past?
Regisserat av:

8
Sing a Song of Murder 1973-04-01
Sing a Song of...
1973-04-01
When rock music star Rick Michaels accidentally falls into his empty pool his girl friend April thinks he is dead. Ricks managers Rooney and Paige believe the same and fearing for their salary they feign a kidnapping. Barnaby searches for April, who disappeared.
Regisserat av:

9
See Some Evil, Do Some Evil 1973-04-08
See Some Evil, Do...
1973-04-08
Harry Warren is shot by Stanley Lambert, the seemingly blind pianist at The Offside club. Barnaby finds out that larger amounts from Warrens account did not go to his mistress Jenny. He tries to expose Stanley as a person with eyesight and a blackmailer.
Regisserat av:

10
Murder Go-Round 1973-04-15
Murder Go-Round
1973-04-15
Nick Gorman, who tries in vain to meet Johnny Arthur, is killed in a hit-and-run accident. Barnaby poses as a man on a fishing trip to investigate. The townspeople Flory, Johnson, Spake and Rile draw lots on who should kill Barnaby. They all acquired sudden wealth.
Regisserat av:

11
To Denise, With Love and Murder 1973-04-22
To Denise, With...
1973-04-22
Alex Chandler kills his mistress Denise during a quarrel, because she talked to his rich wife Hazel hoping to encourage a divorce. A disappointed Hazel leaves home and as she does not return her brother hires Barnaby to find out whether Alex murdered Hazel.
Regisserat av:

12
A Little Glory, a Little Death 1973-04-29
A Little Glory, a...
1973-04-29
Gloria overhears aging movie star Jason Craigs involvement in drug smuggling. Her blackmail threat leads to her death and Jason pushes her car over a cliff. Her daughter Doris hires Barnaby, who is put out of action. Jones tells Doris to disguise as Gloria.
Regisserat av:

13
Twenty Million Alibis 1973-05-06
Twenty Million...
1973-05-06
During a TV talk show presenting his memoirs former jewel thief Tony Neill plans to steal a diamond necklace unnoticed during a break. He succeeds, but kills the butler. Barnaby is hired by an insurance company to find jewelry and asks Neill for advice.
Regisserat av: