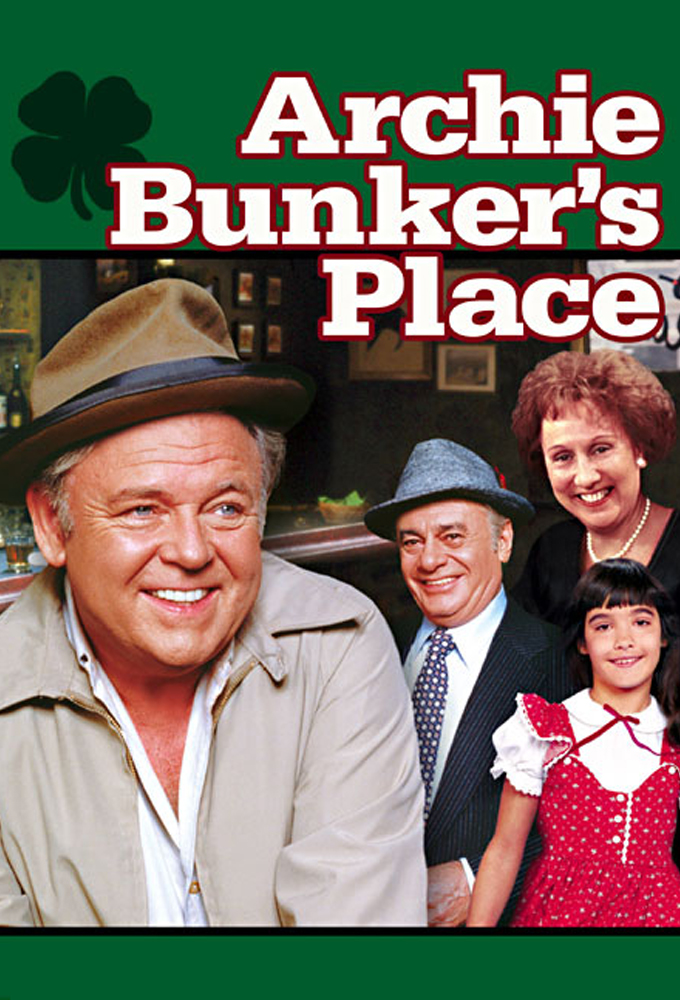 (1979)
Originaltitel: Archie Bunker's Place
Release: 1979-09-01
TV-bolag: CBS
Längd per avsnitt: 30 min min
Status: AVSLUTAD
Archie Bunkers Place was a continuation of the long-running hit sitcom All in the Family. Archie Bunker purchased his favorite hangout, Kelseys Place, and renamed it. He owned the bar in partnership with liberal Jewish man Murray Klein. Most of the action took place at Archies Place, where the beloved bigot voiced his opinions in his own bar, instead of at home. (TheTVDB)
Komedi

2
Archie's New Partner (2) 1979-09-23
Archie's New...
1979-09-23
Harry finalizes the sale of his half to Murray Klein, much to Archies chagrin. However, Archie must come to grips with the fact that he has a new partner. Murray also discovers that there is more to Archie than his bigoted exterior.
Regisserat av:

3
Edith Gets Hired 1979-09-30
Edith Gets Hired
1979-09-30
Archies Place has acquired a new regular customer, Dottie. However, Archie and Murray discover that she is a prostitute and is conducting her business at the bar. This is bad for the bars image. How can they convince her to leave?
Regisserat av:

4
Archie and the Oldest Profession 1979-10-07
Archie and the...
1979-10-07
Edith, who has been jobless since she got fired from the Sunshine Home, has gotten a job as recreational assistant at the Rego Park Center for the Mentally Ill. However, Archie has decided that he thinks that Edith should not be working.
Regisserat av:

5
Edith vs. the Energy Crisis 1979-10-14
Edith vs. the...
1979-10-14
The energy crisis has become a big problem. The bar is freezing cold and Edith has been preserving as much energy as possible at home as well. Soon, Archie is suffering as well, when the frigid conditions give him a case of strep throat.
Regisserat av:

6
Bosom Partners 1979-10-21
Bosom Partners
1979-10-21
Archie is in trouble with the State of New York when he is charged with non-payment of sales tax and questionable record keeping. Now its up to Murray to save Archie and the bar by trying to romance the tax agent.
Regisserat av:

8
The Cook 1979-11-04
The Cook
1979-11-04
Archie and Murray hire short-order cook Veronica Rooney (Anne Meara), but she insists that her gay nephew be hired as waiter. Archies strong feelings on homosexuality present a problem.
Regisserat av:

9
Murray and the Liquor Board 1979-11-11
Murray and the...
1979-11-11
In a protest march against Napom, Murray punched a cop. Although it has been pardoned, his criminal record may cost the bar its liquor license.
Regisserat av:

12
Barney and the Hooker 1979-11-25
Barney and the...
1979-11-25
Dottie (the hooker from #3) has been arrested for prostitution. Murray bails her out and talks Archie into hiring her as a waitress to try to keep her out of trouble. However, trouble finds her when now divorcee Barney Hefner falls in love and proposes.

14
The Shabbat Dinner 1979-12-09
The Shabbat Dinner
1979-12-09
Edith and Stephanie are preparing a Shabbat dinner, a dinner eaten on the Jewish sabbath. They invite Archies partner, Murray and his non-Jewish girlfriend. Unbeknownst to him, Edith also invites his mother, who feels that Murray should only be dating Jewish women.
Regisserat av:

22
Van Ranseleer's Operation 1980-03-02
Van Ranseleer's...
1980-03-02
When Archie and the guys at the bar read in the paper that there might be a cure for Mr. Van Ranseleers blindness, they pool their efforts and money so he can have the operation.
Regisserat av: