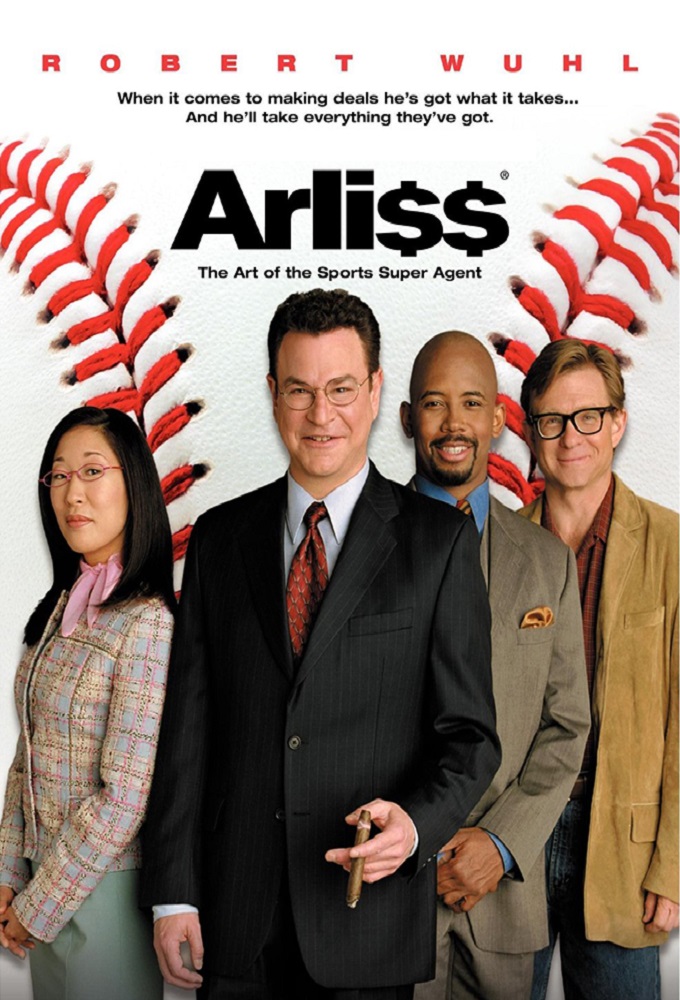 (1996)
Originaltitel: Arli$$
Release: 1996-08-10
TV-bolag: HBO
Längd per avsnitt: 30 min min
Status: AVSLUTAD
Comic actor Robert Wuhl, who created and stars, plays Arliss Michaels, a sports super-agent driven by twin motivations of profit and idealism. Arliss is in the race to realize his clients dreams of stupendous wealth, but hes just as likely to put his reputation (and big bucks) on the line to help a fading player claim his niche in history. As with HBOs The Larry Sanders Show, Arli$$ gets a lot of mileage out of verisimilitude. (TheTVDB)
Komedi Sport

1
2
3
4
5
6
7
SÄSONG 1

1
A Man of Our Times 1996-08-10
A Man of Our Times
1996-08-10
While being nominated for the civic honor Man of Our Times, Arliss must juggle one clients plans for a same-sex marriage on the opening night of a huge ice-skating tour, Kirbys gambling habit, and another clients financial ruin and impending unemployment.
Regisserat av:

2
Negotiating: It's Never Personal 1996-08-14
Negotiating: It's...
1996-08-14
While high-school hoops sensation Shaler halimon announces hell skip college and jump straight to the NBA, Arliss positions himself as Shalers agent and uses the opportunity to settle a score with team owner Buddy Reingold.
Regisserat av:

3
Athletes Are Role Models 1996-08-21
Athletes Are Role...
1996-08-21
Temptation gets the better of squeaky-clean QB Dan Hendricks. Arliss battles with a clients desire to confess his sins to the world, while keeping the suspicious media and a scorned wife at bay.
Regisserat av:

4
How to Turn a Minus into a Plus 1996-08-28
How to Turn a Minus...
1996-08-28
AMM client and boxing champ Sucre Rey Santos finally gives in and grants top contender Cohones Ochonez a title fight. The huge payday means Arliss can finally buy that Gulfstream Jet hes had his eyes on. But when Ochonez is arrested and tossed in jail, the fight is no mas. However, Arliss gets the...
Regisserat av:

5
What About the Fans? 1996-09-04
What About the Fans?
1996-09-04
L.A. Kings owner Flora Lansing dangles part-ownership in front of Arliss if he can find a new home for her hockey team--provided theres a new stadium, complete with luxury boxes and PSLs. But this must be kept a secret! So Arliss shops the team to three prospective homes: Raleigh-Durham, Las Vegas...
Regisserat av:

6
The Company You Keep 1996-09-11
The Company You Keep
1996-09-11
Mike Armstrong, president of multinational CSM, is interested in buying AMM. Arliss never dreamed of selling until he hears what Armstrongs paying. AMM staffers, particularly Kirby, Rita and Stanley, know their boss is up to something and begin to worry about their job security.
Regisserat av:

7
Colors of the Rainbow 1996-09-18
Colors of the...
1996-09-18
A reporter overhears Arliss talking about the Jaboos of South Street, a rival stickball team from his old neighborhood, and interprets this as a racial slur. A media siege begins and arliss is under fire. Meanwhile, free-agent relief pitcher (and white supremacist) Trevor Heath decides to let...
Regisserat av:

8
Crossing the Line 1996-09-25
Crossing the Line
1996-09-25
Why would Arliss even consider representing Anya Slovachek, the 186th ranked woman tennis player whose father is a psychotic maniac? Well, when he sees Anya with his own eyes, Arliss mind is made up for him.
Regisserat av:

9
Timing Is Everything 1996-10-02
Timing Is Everything
1996-10-02
Arliss and Kirby decide to take beach volleyball to the next level by creating a new made-for-TV indoor tour with high-level glitz, oiled bodies, fluorescent sand and heavy promotion. But everything goes afoul as the tours top womens pair have irreconcilable differences, and one of the top guys...
Regisserat av:

10
The Client's Best Interest 1996-10-09
The Client's Best...
1996-10-09
In the 12th annual Den of Thieves Rotisserie Baseball League, Arliss and Kirby hope their Frozen Ropes can bring the title back where it belongs, away from cosmetic surgeon Vic Freed and his hated Silicone Valley. Arliss must resolve a conflict of interest between the good of the Frozen Ropes, and...
Regisserat av:

11
The Stuff That Dreams Are Made Of 1996-10-16
The Stuff That...
1996-10-16
As a kid, Arliss idolized Hall of Fame outfielder Rocky Framaggio so much that he still carries around the Rocks rookie card. And now, after a chance meeting at the racetrack, Arliss decides to help the downtrodden Rock make some scratch and get back on his feet. But after the Rock strikes out at...
Regisserat av: