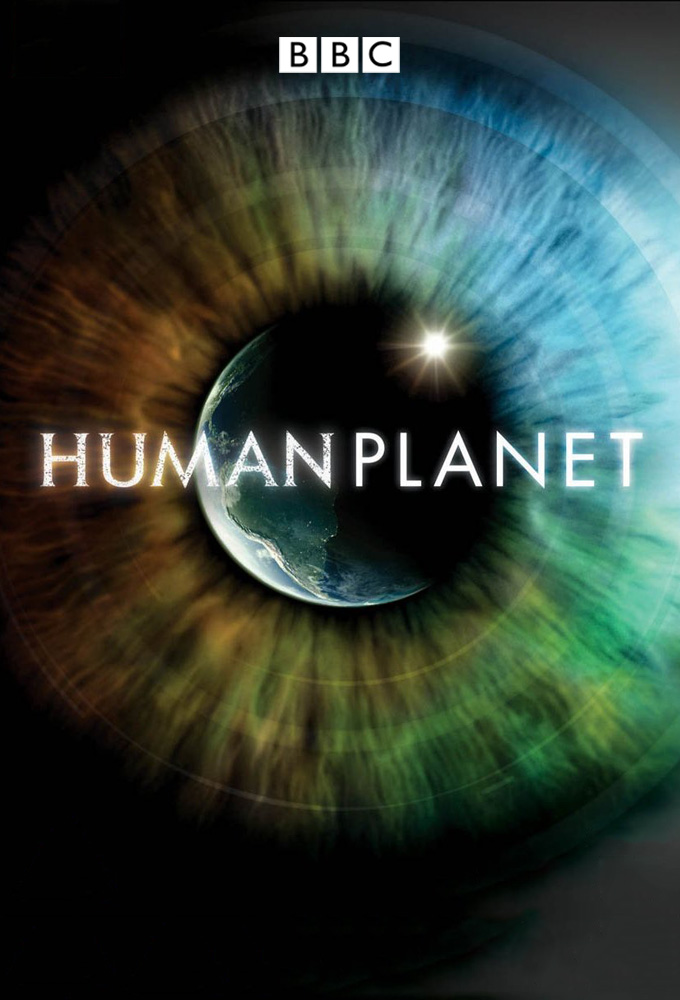 (2011)
Originaltitel: Human Planet
Release: 2011-01-13
TV-bolag: BBC One
Längd per avsnitt: 60 min min
Status: AVSLUTAD
Following in the footsteps of Planet Earth and Life, this epic eight-part blockbuster is a breathtaking celebration of the amazing, complex, profound and sometimes challenging relationship between humankind and nature. Humans are the ultimate animals – the most successful species on the planet. From the frozen Arctic to steamy rainforests, from tiny islands in vast oceans to parched deserts, people have found remarkable ways to adapt and survive in the harshest environments... (TheTVDB)
Dokumentär

SPECIAL
1
SÄSONG 1

1
Oceans - Into the Blue 2011-01-13
Oceans - Into the...
2011-01-13
As an air-breathing animal, the human is not built to survive in water. But people have found ways to live an almost aquatic life so they can exploit the seas riches. From a shark-whisperer in the Pacific to Brazilian fishermen collaborating with dolphins to catch mullet, this journey into the blue...
Regisserat av:

2
Deserts - Life in the Furnace 2011-01-20
Deserts - Life in...
2011-01-20
We can survive for weeks without food, but only days without water: it is the essential element of life. Yet many millions of us live in parched deserts around the world. In the second episode of Human Planet, we discover how the eternal quest for water brings huge challenges - and ingenious...
Regisserat av:

3
Arctic - Life in the Deep Freeze 2011-01-27
Arctic - Life in...
2011-01-27
The Arctic is the harshest environment on Earth: little food grows, its dark for months on end, and temperatures stay well below freezing for much of the year. Yet four million people manage to survive here. Human Planet tells remarkable stories of extraordinary people who make their homes in...
Regisserat av:

4
Jungles - People of the Trees 2011-02-03
Jungles - People of...
2011-02-03
The rainforest is home to more species of plants and animals than any other habitat on the planet. But for humans, life there is not as easy as it looks. Life in the trees requires great skill, ingenuity and sheer bravery. The Matis of Brazil carve 4-metre-long blow-pipes to hunt monkeys - in near...
Regisserat av:

5
Mountains - Life in Thin Air 2011-02-10
Mountains - Life in...
2011-02-10
From lush cloud forests to bare summits that take your breath away, the higher you climb the tougher life gets on a mountain. Human Planet explores the extraordinary ways in which people survive at extreme altitudes where nature becomes utterly unforgiving. In the Altai Mountains in Western...
Regisserat av:

7
Rivers - Friend and Foe 2011-02-24
Rivers - Friend and...
2011-02-24
Rivers provide the essentials of life: fresh food and water. They often provide natural highways and enable us to live in just about every environment on Earth. But rivers can also flood, freeze or disappear altogether! Human Planet joins Sam Niang, a Laotian fisherman, as he walks a high wire...
Regisserat av:

8
Cities - Surviving the Urban Jungle 2011-03-03
Cities - Surviving...
2011-03-03
A look at the one environment thats been made by us for us - the city. Over half of the worlds population now lives in the urban jungle. The city is built to keep untamed nature out - but nature cant be pushed away. From bed bugs sucking our blood at night to rats in our restaurants, many animals...
Regisserat av: