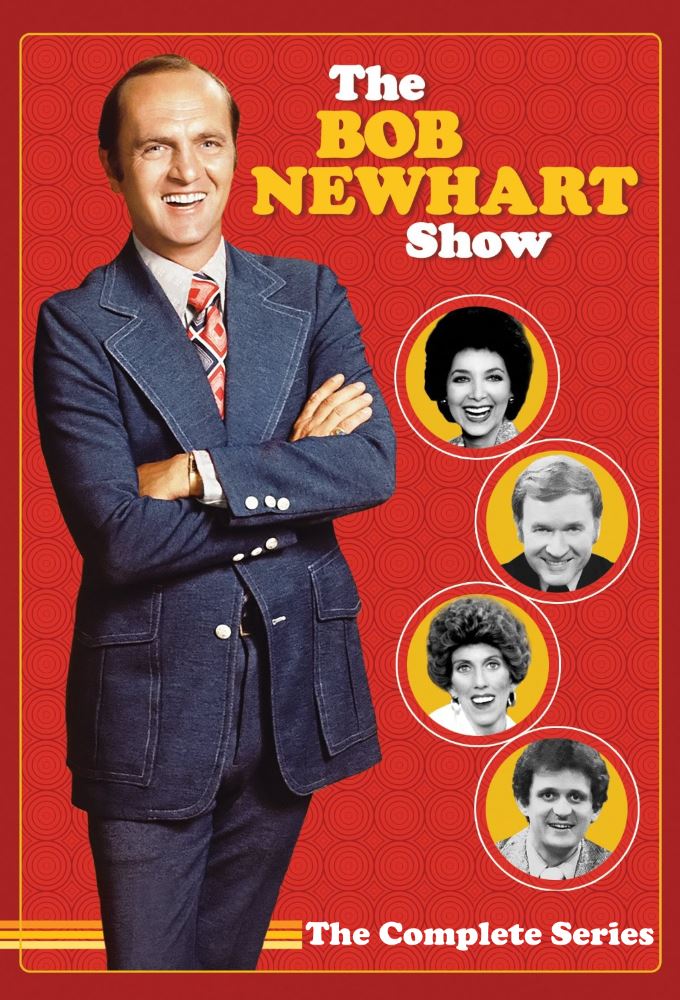 Bob Newhart is Dr. Robert Hartley, a Chicago psychologist living with his schoolteacher wife Emily. Complicating life for the serene, stammering doc was his neighbor, Howard, a flighty navigator; and Bobs coworkers, dentist Jerry and flippant receptionist Carol. The humor was gentle, sophisticated and, at times, wonderfully surreal. (TheTVDB)
Komedi

SPECIAL
1
2
3
4
5
6
SÄSONG 1

1
Fly the Unfriendly Skies 1972-09-16
Fly the Unfriendly...
1972-09-16
Bob invites Emily to join his fear of flying group on a trip to New York City. Much to Bobs surprise he finds that Emily also has a fear of flying and refuses to go. After a conversation with Howard she decides to go only to back out after boarding the plane.
Regisserat av:

2
Tracy Grammar School, I'll Lick You Yet 1972-09-23
Tracy Grammar...
1972-09-23
Its Vocation Day in Emilys class, and Bob feels left out when hes not invited. At the last minute, hes asked to fill in, but Emilys worst fears are confirmed when Bob fails to excite the kids interest.
Regisserat av:

3
Tennis, Emily? 1972-09-30
Tennis, Emily?
1972-09-30
Bob experiences pangs of jealousy when Emilys handsome new tennis instructor comes to see him with an emotional problem, namely, his inability to turn down the women who are all uncontrollably attracted to him.
Regisserat av:

6
Come Live with Me 1972-10-28
Come Live with Me
1972-10-28
Carol tries to get Bob to approve her moving in with her new boyfriend Roger, who has just separated from his wife. Bob refuses, telling her she will have to make her own decision.
Regisserat av:

7
Father Knows Worst 1972-11-04
Father Knows Worst
1972-11-04
Bobs divorced neighbor, Howard Borden, is convinced that his son, Howie, doesnt really like him. Later, Howards ex-wife convinces him that Howie thinks he is the greatest guy in the world.
Regisserat av:

8
Don't Go to Bed Mad 1972-11-11
Don't Go to Bed Mad
1972-11-11
Bob wants to watch football every Monday night. Emily feels this is unfair: their other activities allow the couple only two nights each week to be together, and she thinks they should do something that they both enjoy. This leads to an unresolved, all-night argument that ends only when the two...
Regisserat av:

9
P-I-L-O-T 1972-11-18
P-I-L-O-T
1972-11-18
Bob and Emily have been trying for some time to have a child. When they attend a party where the conversation turns to the subject of children, they feel so left out that they decide to adopt a child. This is a retooled version of the original pilot. In order for this episode to fit into the...
Regisserat av:

10
Anything Happen While I Was Gone? 1972-11-25
Anything Happen...
1972-11-25
As soon as Bob returns to the office from his vacation in Mexico, Jerry announces that he is about to be married to a girl he met nine days ago. Cynthia, a beautiful but domineering oral hygienist, becomes too much for Jerry, and he realizes that he has made a mistake.
Regisserat av:

11
I Want to Be Alone 1972-12-02
I Want to Be Alone
1972-12-02
Bob decides that for his own mental well-being, he needs some peace and quiet. He moves into a hotel room by himself, leaving a confused Howard Borden thinking that Bob and Emily have split up.
Regisserat av:

12
Bob and Emily and Howard and Carol and... 1972-12-09
Bob and Emily and...
1972-12-09
Howard floats into Bobs office on Cloud Nine after having a tooth pulled. He is so poetic that Carol tells Emily, I want him. Emily agrees to help Carol get him, and the two have an up-and-down romance.
Regisserat av:

13
I Owe It All to You... But Not That Much 1972-12-16
I Owe It All to...
1972-12-16
Jerry decides there is something wrong with him because he never becomes serious about any of the girls he dates. He asks Bob if he can become one of his patients. Bob agrees, but they have to abandon the plan when it begins to interfere with their friendship.
Regisserat av:

15
Let's Get Away From it Almost 1973-01-06
Let's Get Away From...
1973-01-06
Bob and Emily travel to a ski lodge thats nearly deserted except for the annoying couple with whom they share a bathroom. After sitting through a disastrous dinner, the Hartleys decide to leave only to find themselves caught in the spotlight of the abominable floor show theyre trying to escape.
Regisserat av:

16
The Crash of 29 Years Old 1973-01-13
The Crash of 29...
1973-01-13
Feeling unfulfilled as a woman, and having just passed her 29th birthday, Carol quits her job as Bobs receptionist. After having been gone for a while, Carol suddenly shows up at one of Bobs group-therapy sessions and creates a situation in which Bob finds himself more of a patient than a doctor.
Regisserat av:

19
Not With My Sister You Don't 1973-02-03
Not With My Sister...
1973-02-03
Howard Bordens 22-year old sister Debbie arrives to spend the week with him. Emily arranges a blind date for her with Jerry Robinson and Howard suddenly turns into an overprotective big brother.
Regisserat av:

22
You Can Win 'Em All 1973-02-24
You Can Win 'Em All
1973-02-24
When a star pitcher for the Chicago Cubs credits Bob with saving his career, the endorsement brings Bob a new patient, Moose Washburn, a second-string player whose career is beyond a mere psychologists help.
Regisserat av:

23
Bum Voyage 1973-03-03
Bum Voyage
1973-03-03
Afraid that his practice, as well as his patients, will fall apart if he leaves, Bob keeps resisting Emilys plans for a two-month European cruise.
Regisserat av: