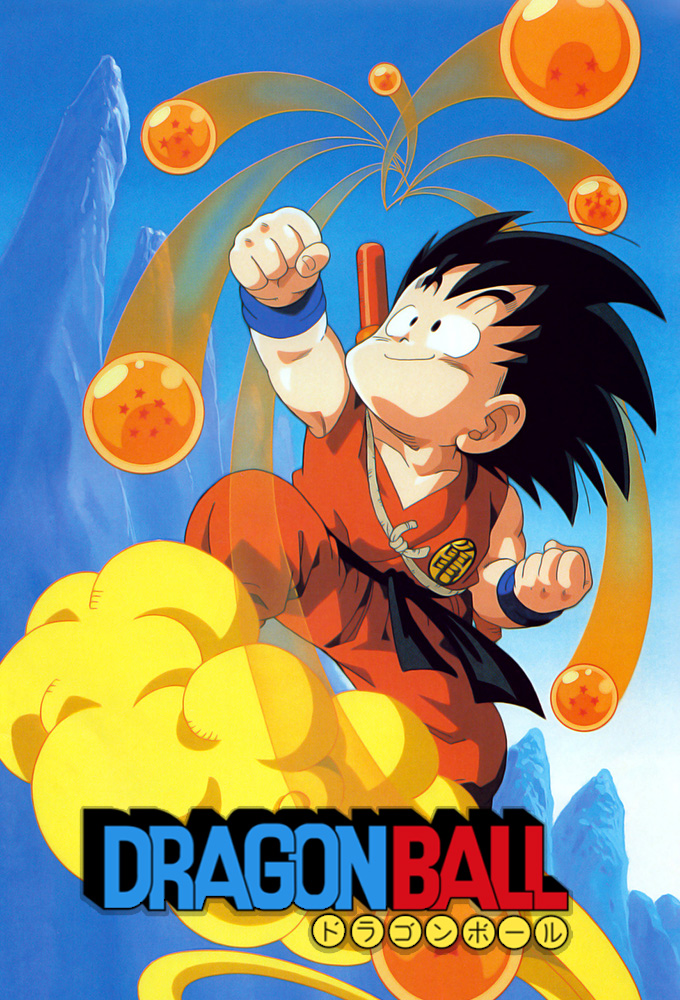 (1986)
Originaltitel: Dragon Ball
Release: 1986-02-26
TV-bolag: Fuji TV
Längd per avsnitt: 25 min min
Status: AVSLUTAD
Long ago in the mountains, a fighting master known as Gohan discovered a strange boy whom he named Goku. Gohan raised him and trained Goku in martial arts until he died. The young and very strong boy was on his own, but easily managed. Then one day, Goku met a teenage girl named Bulma, whose search for the dragon balls brought her to Gokus home. Together, they set off to find all seven dragon balls in an adventure that would change Gokus life forever. See how Goku met his life long... (TheTVDB)
Action Äventyr Animerat Barn Fantasy

SPECIAL
1
2
3
4
5
SÄSONG 1

1
Secret of the Dragon Balls 1986-02-26
Secret of the...
1986-02-26
Goku, an orphan living in the mountains, is out fishing when he meets Bulma, a young girl searching for the seven Dragon Balls, which, when gathered together, grant a wish. Gokus grandpa gave him the four-star Dragon Ball before he died. Needing this ball for her collection, already possessing two...

3
The Nimbus Cloud of Roshi 1986-03-12
The Nimbus Cloud of...
1986-03-12
On their way to the sea, Goku and Bulma run into a Bear Thief that tries to eat the turtle. Goku makes short work of him, and they continue on their way. When they arrive at the shore, the turtle tells them to wait for him. When he comes back, a man is riding on his back. The man is Master Roshi,...

4
Oolong the Terrible 1986-03-19
Oolong the Terrible
1986-03-19
The dragon radar leads Goku and Bulma into a remote village. They find that the village is being terrorized by a shapeshifter named Oolong. An old woman in this village has the six-star Dragon Ball, and she agrees to give it to them if they drive Oolong away from their village. Oolong wants to...

5
Yamcha the Desert Bandit 1986-03-26
Yamcha the Desert...
1986-03-26
Bulma and Goku continue their quest for the Dragon Balls with Oolong (Bulma brought him along thinking his shape-shifting abilities might come in handy). But the next Dragon Ball lies beyond the Diablo Desert. Oolong is terrified, for he knows that the Diablo Desert is home to Yamcha, a fearsome...

9
Boss Rabbit's Magic Touch 1986-04-23
Boss Rabbit's Magic...
1986-04-23
Bulma and Gokus search for the Dragon Balls takes them to a remote village that is being terrorized by a villainous gang, the Rabbits. Before long, Goku and the Dragon Ball Team come face to face with two of the Rabbits, and Goku must fight to protect his friends. Can he protect them from the...

12
A Wish to the Eternal Dragon 1986-05-14
A Wish to the...
1986-05-14
Just as Emperor Pilaf is about to make his wish, Goku leads the others in a successful escape attempt. Are they in time to prevent the Emperor from seizing control of the world? And just what does happen when Goku sees the full moon?

13
The Legend of Goku 1986-05-21
The Legend of Goku
1986-05-21
Goku is exposed to a full moon. Transforming into a huge, alien gorilla, Goku goes on a rampage, attacking friends and foes alike. Can Bulma, Yamcha, and Puar return Goku to his normal self without hurting him and while also avoiding Emperor Pilafs army?

14
Goku's Rival 1986-05-28
Goku's Rival
1986-05-28
Goku stops by his house to gather his things, then heads towards Master Roshis island. When he arrives, Master Roshi tells him that he will only train him if he brings him a girlfriend. Goku brings back a big ugly-looking girl but Master Roshi wanted a beautiful girl. So Goku got a mermaid, but it...

15
Look out for Launch! 1986-06-04
Look out for Launch!
1986-06-04
Because Krillin cant sit on the Nimbus Cloud, he is forced to cling to Gokus back during their search for a girl. They find a girl being attacked by two men. Goku beats up these two guys, and they bring the girl back to Master Roshis island. Unknown to either of them, the girl, Launch, was actually...

17
Milk Delivery 1986-06-18
Milk Delivery
1986-06-18
Master Roshi wakes the boys up early to begin their training. Their job is to deliver milk, but there are several miles between each house. After several exhausting runs, they are made to climb a mountain to deliver milk to the monk at the top. While at the top, Master Roshi tells them that in...

18
The Turtle Hermit Way 1986-06-25
The Turtle Hermit...
1986-06-25
The boys continue their workout by plowing an entire field with their hands. After a quick breakfast, they head over to a construction site. Here, they dig holes and haul equipment. Their speed dazzles the foreman. They eat lunch and then take a nap. Goku is getting impatient, and wants to learn...

19
The Tournament Begins 1986-07-02
The Tournament...
1986-07-02
After several months of training, the boys are anxious to learn fighting techniques. Master Roshi tells them that he has no technique to teach them. The whole point of turtle hermit training is to get your body in superhuman condition. He says fighting is just the expression of your power. Then he...

20
Elimination Round 1986-07-09
Elimination Round
1986-07-09
The preliminary rounds are divided into four sections, with the top two from each section going on to the finals. Goku and Krillin are drawn into the same section, but are on opposite ends, so they wont have to fight each other. Gokus first match is against a giant, but he is able to knock him out...

23
Monster Beast Giran 1986-07-30
Monster Beast Giran
1986-07-30
Gokus match is postponed by rain. While theyre waiting for the weather to clear up, they relax in the bar. Giran, Gokus opponent, comes in and starts causing trouble. Yamcha warns Goku that Giran has been known to cheat. When the match finally starts, Giran tricks Goku into dropping his guard, then...

24
Krillin's Frantic Attack! 1986-08-06
Krillin's Frantic...
1986-08-06
The first semifinal begins. Unfortunately, Jackie Chuns punches are too fast for Krillin to see. He attacks Jackie Chun, and after a brief instant, they fly away from each other. The announcer asks them to slowly reenact what happened. Jackie Chun tried to kick Krillin, but he dodged it and then...

25
Danger From Above 1986-08-13
Danger From Above
1986-08-13
Goku starts his semifinal match against Nam. He uses a tornado attack to push Nam out of the ring, but gets too dizzy before he can finish it. Nam then uses his aerial attack, which is supposed to leave the victim unconscious. Goku is somehow able to stand up afterwards, and jumps up in the air...

26
The Grand Finals 1986-08-20
The Grand Finals
1986-08-20
The final match begins. Goku jumps up in the air, but Jackie Chun sees it coming and kicks him out of the ring. Everyone thinks that Jackie has won, but Goku flies back into the ring by spinning his tail like helicopter blades. Jackie challenges Goku to use the Kamehameha wave, and to his great...

27
Number One Under The Moon 1986-08-27
Number One Under...
1986-08-27
Night begins to fall as the final match continues. Jackie Chun hypnotizes Goku and puts him to sleep. Goku cant wake up unless Jackie tells him to. Just before the count reaches 10, Bulma yells Goku! Your dinner is ready! and Goku wakes up. Then Goku uses janken attack moves, but Jackie defends...

28
The Final Blow 1986-09-03
The Final Blow
1986-09-03
Jackie Chun actually fired the wave at the moon, not Goku. Goku is found sleeping in the rubble, so they wake him up to continue the match. Krillin lends Goku his clothes. Once the match resumes, Jackie Chun tries to fire another Kamehameha wave at Goku, but finds that he doesnt have the energy....