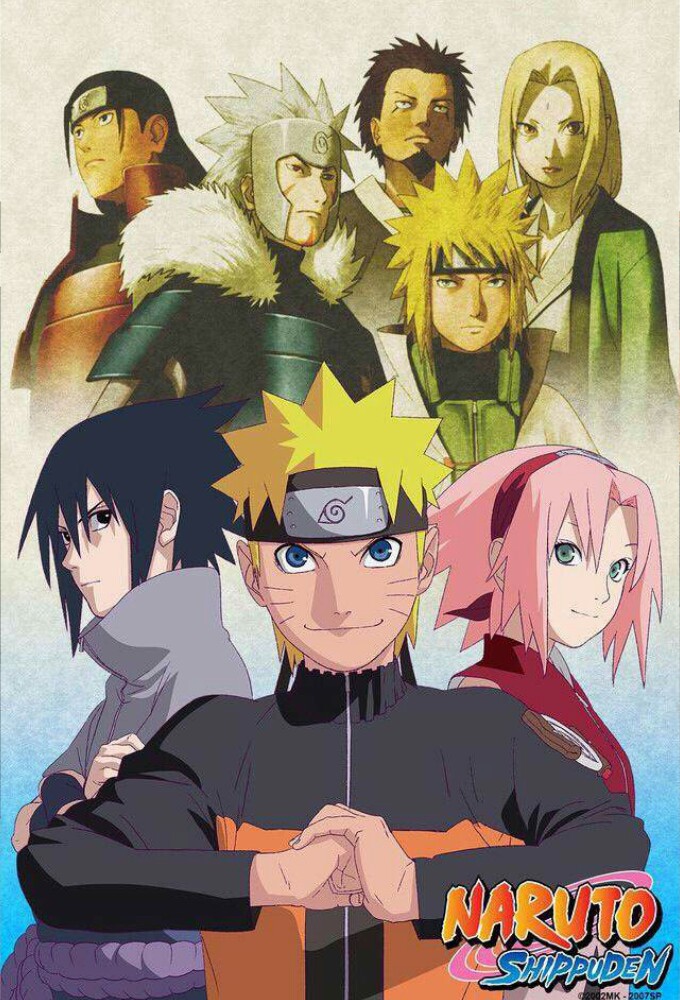 (2008)
Originaltitel: Naruto: Shippûden
Skapad av: Masashi Kishimoto
Release: 2008-11-11
TV-bolag: TV Tokyo
Längd per avsnitt: 20 min min
Status: AVSLUTAD
Naruto: Shippuden is an anime series adapted from Part II of the Naruto manga series by Masashi Kishimoto. The series is directed by Hayato Date and produced by Studio Pierrot and TV Tokyo. Naruto: Shippuden is a continuation of the Naruto manga, and continues the same storyline after the passing of two and a half years in the Naruto universe. It began broadcasting on TV Tokyo on February 15, 2007. (TheTVDB)
Action Äventyr Animerat

2
Akatsuki, Makes A Move 2007-02-15
Akatsuki, Makes A...
2007-02-15
As Naruto gets back into the swing of things and meets back up with what is left of Team 7, Kakashi and Sakura, Jiraiya has something important to tell them. It seems a shinobi group known as Akatsuki is on the move. The things they are after are the tailed beasts like the one inside of Naruto, the...
Regisserat av:

3
The results of training 2007-02-22
The results of...
2007-02-22
The bell test begins again while Tsunade, Jiraiya, and Shizune watch, but this time Kakashi is taking things seriously. So serious that he is using his Sharingan. Can Naruto and Sakura get the bells before the deadline? Meanwhile Gaara searches for the Akatsuki member that has invaded the village.
Regisserat av:

4
Jinchuuriki of the Sand 2007-03-01
Jinchuuriki of the...
2007-03-01
The bell test continues for Naruto and Sakura. Meanwhile Gaara discovers that the Akatsuki member, Deidara, has infiltrated the village. Now the battle begins between Gaara and Deidara. With Deidara after Shukaku which is sealed in Gaara, can the older and more powerful Gaara defeat this powerful...
Regisserat av:

7
Dash, Kankurou 2007-03-29
Dash, Kankurou
2007-03-29
With Gaara captured and abducted, Kankuro goes after Deidara to get him back. However, his path is soon blocked by Sasori, whom doesnt plan on letting him pass.

9
Jinchuuriki Tears 2007-04-12
Jinchuuriki Tears
2007-04-12
As the group travels to Hidden Sand Village, Naruto realizes that Sakura doesnt know why Akatsuki are after Gaara and himself. Has the time finally come to tell her the truth?

10
Sealing Technique: Illusionary Dragon... 2007-04-19
Sealing Technique:...
2007-04-19
With Kankuro injured, Chiyo and Ebizou make an appearance in order to save his life. They try everything, but its all in vain and Kankuros condition is progressively getting worse. Meanwhile, Sasori and Deidara arrive at the Akatsuki hideout and begin extracting Shukaku from Gaara using a...

11
Apprentice of a Medical Ninja 2007-04-26
Apprentice of a...
2007-04-26
Upon arriving at the Sand Villages medical center, Kakashi is attacked by an elderly woman. Who is this woman and why is she attacking Kakashi? Meanwhile, Sakura does an examination on Kankuro and figures out that hes in bad shape. Can she use what Tsunade taught her in order to save Kankuros life?

12
The Retired Old Womans Determination 2007-05-03
The Retired Old...
2007-05-03
When Pakkun discovers the whereabouts of the Akatsukis hideout, Kakashi orders Pakkun to find Gai and his team and lead them to the position. Meanwhile, Kakashi and his group decide to head out with Temari and other sand ninjas, but Chiyo decides to go in her place. Will this old woman help or...

14
Narutos Growth 2007-05-17
Narutos Growth
2007-05-17
While Gai, Lee, Tenten and Neji continue their battle against Kisame, Naruto and Kakashi work together to fight Itachi. But when Itachi puts Naruto in a genjutsu spell, can Naruto find a way to break free?

16
Secret of Jinchuuriki 2007-05-31
Secret of...
2007-05-31
As the group draws closer to Akatsukis hideout, Chiyo reveals some startling information about the Jinchuuriki. Naruto becomes more determined than ever to rescue Gaara, but is it too late to save him?

18
Break in! Button Hook Entry 2007-06-21
Break in! Button...
2007-06-21
Knowing that Akatsukis lair is protected by a powerful barrier, Kakashi and Gai decide that the teams must work together to dismantle the barrier.

21
Sasoris real face 2007-07-26
Sasoris real face
2007-07-26
With his puppet destroyed, Sasori reveals himself to Chiyo and Sakura, looking no older than when he left his village twenty years ago. As a further bit of nostalgia, he produces a summoning scroll and calls forth the Third Kazekage, whom Sasori has made into a puppet. Using its weapons, which are...

22
Chiyo´s Inner Hand 2007-08-02
Chiyo´s Inner Hand
2007-08-02
Sakura manages to escape the poison gas cloud by using an explosive scroll on herself. Chiyo calls forth the Mother and Father puppets that Sasori created to fight him and the Third. They manage to hold down the Third for awhile until Sasori releases the Thirds secret technique: Iron Sand....

23
Father and Mother 2007-08-02
Father and Mother
2007-08-02
The Iron Sand stops both puppets from moving. Chiyos right arm (which she had turned into a puppet) gets clogged and broken as well. Chiyo thinks back to the past and remembers how Sasori created and controled his first puppets, Father and Mother. Sakura urges Chiyo to use her again as her puppet....

25
Between Life and Death in Three Minutes 2007-08-16
Between Life and...
2007-08-16
Sakura has managed to destroy Sasoris strongest puppet, but he still has a few tricks up sleeve. And although Sakuras managed to avoid a fatal blow from the poison, she and Chiyo must defeat him in three minutes before the antidote wears off and they are vulnerable to Sasoris attacks. Can they...

27
The Dream That Couldnt Come True 2007-08-30
The Dream That...
2007-08-30
Its the final stand against Sasori, and Chiyo reveals the flaw in Sasoris immortality. As Sasori breathes his last breaths, he rewards the two kunoichi for his defeat by providing them some valuable information. In ten days, they will have the opportunity to meet with one of his spies who can...

28
The Resurrected Beasts 2007-09-13
The Resurrected...
2007-09-13
As Kakashi and Naruto chase after Deidara, and Sakura and Chiyo rest from their fight with Sasori, Gai and his team continue to fight their doppelgangers. Things arent looking good for the four as the doppelgangers remain at the same strength while Gais team grows weaker. Can they finish things up,...

29
Kakashis Enlightenment! 2007-09-27
Kakashis...
2007-09-27
Kakashi unleashes his new Mangekyo Sharingan against Deidara, turning the tide of the battle in their favor, but when Naruto begins to act strangely, Kakashi sees him as the bigger threat.

30
Instant Esthetics 2007-09-27
Instant Esthetics
2007-09-27
Kakashi must act quickly to calm Naruto down before he releases too much of Kyubis power. Meanwhile, Deidara is cornered by Gais team, and when he realizes that he cant defeat them, he decides that the only way hell die is he takes everyone else with him!

32
The Kazekages Return 2007-10-25
The Kazekages Return
2007-10-25
Now that Gaaras been revived, the Hidden Sand Village slowly begins to return to normal. Its time for the ninja of Konoha to take their leave, and Naruto shows Gaara how friends say goodbye. Meanwhile, a mysterious ninja tries to join Akatsuki.