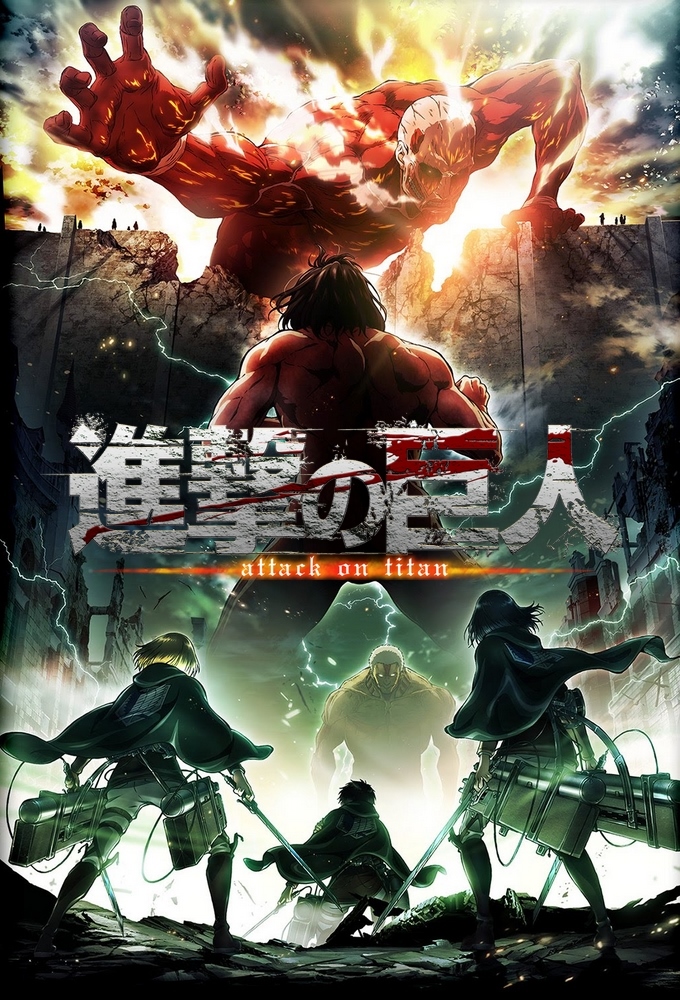 (2013)
Originaltitel: Shingeki no Kyojin
Release: 2013-04-06
TV-bolag: NHK
Längd per avsnitt: 25 min min
Status: AVSLUTAD
Several hundred years ago, humans were nearly exterminated by the Titans. Titans are typically several stories tall, seem to have no intelligence, devour human beings and, worst of all, seem to do it for the pleasure rather than as a food source. A small percentage of humanity survived by building a city protected by extremely high walls, even taller than the largest of Titans. Flash forward to the present and the city has not seen a Titan in over a hundred years, until one day, a... (TheTVDB)
Action Animerat Drama Fantasy

3
A Dim Light Amid Despair: Humanity's... 2013-04-20
A Dim Light Amid...
2013-04-20
Eren begins his training with the Cadet Corps, but questions about his painful past overwhelm him. When he struggles with a maneuvering exercise, Bertholdt and Reiner offer kindly advice.
Regisserat av:

4
The Night of the Closing Ceremony:... 2013-04-27
The Night of the...
2013-04-27
Two years pass and the time for the recruits' graduation approaches. Annie proves her skill in a sparring session, Jean dreams of serving alongside the King, and graduation day brings shocking revelations — along with the sudden appearance of an old foe.
Regisserat av:

5
First Battle: The Struggle for Trost,... 2013-05-04
First Battle: The...
2013-05-04
Five years have passed since the fall of Wall Maria and Eren faces off against the Colossal Titan after it appears out of nowhere once again, and knocks a strategic hole in the gate of Wall Rose. As Titans swarm the city, the newly graduated Cadets are called in to fight a brutal battle that won't...
Regisserat av:

6
The World the Girl Saw: The Struggle... 2013-05-11
The World the Girl...
2013-05-11
Armin tries to cope with the loss of his friends and allies after Titans massacre his squad. Elsewhere in the city, Mikasa manages to take out several of the monsters, which brings back tragic memories of her past and the first time she met Eren.
Regisserat av:

7
Small Blade: The Struggle for Trost,... 2013-05-18
Small Blade: The...
2013-05-18
After the retreat bell sounds, many cadets find themselves without enough fuel to scale the wall back to safety. Mikasa begins to lose hope once she hears of the deaths in Armin's squad, but the appearance of a new type of Titan stokes her will to fight.
Regisserat av:

8
I Can Hear His Heartbeat: The Struggle... 2013-05-25
I Can Hear His...
2013-05-25
Armin comes up with a risky plan that pits Titan against Titan as the abandoned cadets attempt to take back their headquarters. Getting into the building might be possible, but getting out alive and refueled will mean facing more of the giants.
Regisserat av:

9
Whereabouts of His Left Arm: The... 2013-06-01
Whereabouts of His...
2013-06-01
A miraculous return is met with anger and fear. Cannons are fixed on Eren as he struggles to remember what happened to him inside the belly of a Titan and how he ended up as humankind's enemy. One question is all that matters: is Eren human or Titan?
Regisserat av:

10
Response: The Struggle for Trost, Part 6 2013-06-08
Response: The...
2013-06-08
Cadets respond to Eren's terrifying transformation with doubt and fear as he struggles to understand it himself. If Armin can't talk the commander into using Eren's newfound powers for the good of humankind, all hope of stopping the Titans might be lost.
Regisserat av:

11
Idol: The Struggle for Trost, Part 7 2013-06-15
Idol: The Struggle...
2013-06-15
Plans are made to use Eren's Titan powers to seal the hole in the wall in an attempt reclaim Trost. But with the government's bloodstained history and vocal dissenters in the military ranks, the biggest threat to humankind may not be the Titans.
Regisserat av:

12
Wound: The Struggle for Trost, Part 8 2013-06-22
Wound: The Struggle...
2013-06-22
The plan to reclaim Trost falls apart when Eren’s newfound powers turn him into a mindless giant. As Titans continue to swarm the city, it’s up to Armin and Mikasa to make sure the cadets massacred during the mission haven’t died in vain.
Regisserat av:

13
Primal Desire: The Struggle for Trost,... 2013-06-29
Primal Desire: The...
2013-06-29
Jean takes desperate measures to replace his broken Maneuver Gear. Meanwhile, Eren is able to seal the hole in the wall thanks to the help of his fellow cadets, but the cost of humanity’s first victory against the Titans will be enormous.
Regisserat av:

14
Can't Look into His Eyes Yet: Eve of... 2013-07-13
Can't Look into His...
2013-07-13
A special military tribunal will decide Eren’s fate. The Military Police calls for his execution while the Recon Corps argues that he is a powerful resource for humankind, and Mikasa is put on the spot when asked about the events of the Trost mission.
Regisserat av:

15
Special Operations Squad: Eve of the... 2013-07-20
Special Operations...
2013-07-20
The Recon Corps moves Eren to an old abandoned castle where he will continue his training. Hanzi visits and reveals that she’s been putting two captured Titans through a series of tests and trials — experiments that she wants Eren’s help with.
Regisserat av:

16
What Needs to be Done Now: Eve of the... 2013-07-27
What Needs to be...
2013-07-27
Everyone is a suspect in the investigation to find out who killed the two test-subject Titans. Meanwhile, the cadets pick which military branch they’ll be joining, but after the harrowing events in the Trost attack, many are uncertain which branch to choose.
Regisserat av:

17
Female Titan: The 57th Exterior... 2013-08-04
Female Titan: The...
2013-08-04
As the Recon Corps begins its push toward Shiganshina, they encounter an intelligent Female Titan unlike any they’ve seen before. When Armin hypothesizes that it’s really a human that’s been turned into a Titan, he, Jean, and Reiner attempt to stop it.
Regisserat av:

18
Forest of Giant Trees: The 57th... 2013-08-11
Forest of Giant...
2013-08-11
As the Female Titan continues to tear its way through the Recon Corps, Levi makes a bold decision to split the ranks and send Eren and the supply wagons through a huge forest. Is his strategy genius, or does it spell certain death for the scouts?
Regisserat av:

19
Bite: The 57th Exterior Scouting... 2013-08-18
Bite: The 57th...
2013-08-18
With the Female Titan still chasing after Levi's squad, Eren considers turning himself into his Titan form, but Levi tells him to choose to be either a monster or a member of the Recon Corps. As Eren remembers what he has learned from the squad, he realizes that the danger and sacrifice they all...
Regisserat av:

20
Erwin Smith: The 57th Exterior Scouting... 2013-08-25
Erwin Smith: The...
2013-08-25
With the help of Levi's squad, the Recon Corps has successfully captured the Female Titan. As Commander Erwin and Captain Levi begin preparations to extract whoever is inside the Titan, will the Recon Corps discover its true identity, or does the Female Titan have one last trick up its sleeve?
Regisserat av:

22
The Defeated: The 57th Exterior... 2013-09-08
The Defeated: The...
2013-09-08
The Female Titan has captured Eren after ripping him out of his Titan body, but Mikasa and Captain Levi give chase. Elsewhere, the Recon Corps begins preparations for the journey back home to the Wall with their numerous dead in tow.
Regisserat av:

23
Smile: Assault on Stohess, Part 1 2013-09-15
Smile: Assault on...
2013-09-15
Following the disastrous results of the 57th Expedition, Eren is to be brought to the King's palace for a court martial. Armin, desperate to save Eren from certain execution, enlists the help of an old friend to assist with an escape plan.
Regisserat av:

25
Wall: Assault on Stohess, Part 3 2013-09-29
Wall: Assault on...
2013-09-29
Eren, spurred on by his promise to kill every single Titan, unleashes the full power of his Titan form in the fight with the Female Titan. As their bloody battle draws to a close, it seems humanity may finally have a chance at survival. However, with many mysteries still left unsolved, what will...
Regisserat av: