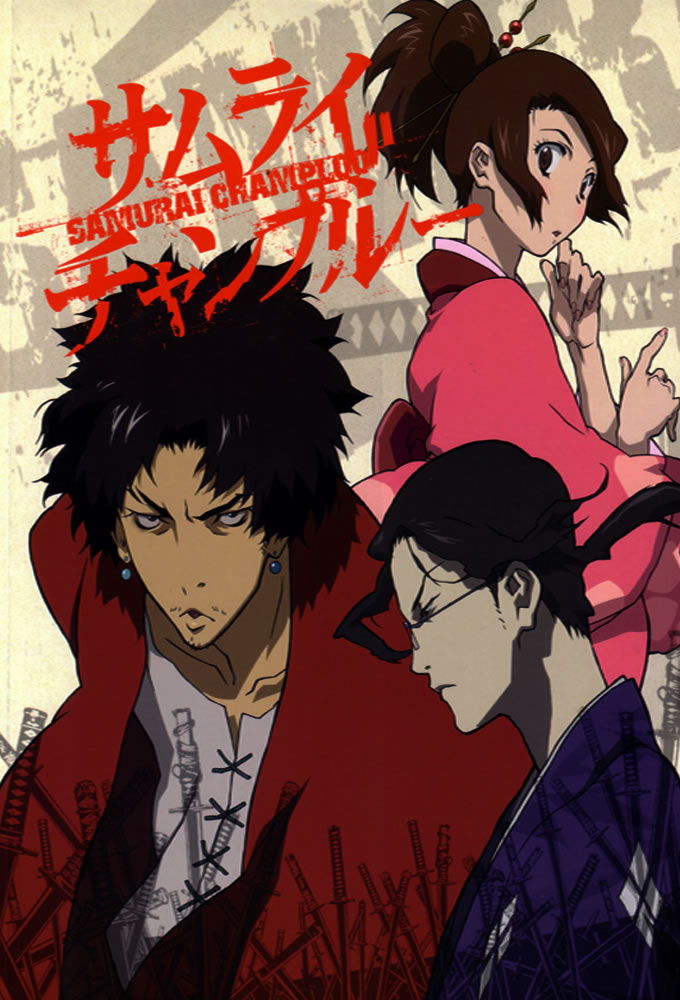 (2004)
Originaltitel: Samurai chanpurû
Release: 2004-05-20
TV-bolag: Fuji TV
Längd per avsnitt: 25 min min
Status: AVSLUTAD
From the makers of Cowboy Bebop comes Samurai Champloo! Sometime during the 17th-19th century, during the Japanese "Edo era", two Samurai Warriors known as Mugen and Jin, have a chance meeting with a 15 year old girl named Fuu. Through a series of events, Fuu leads the warriors on a quest into several differant Japanese locations to find the samurai who smells of sunflowers. Little do the 3 unique characters realize just where fate will take them through situations of sex, violence,... (TheTVDB)
Action Äventyr Animerat

1
SÄSONG 1

1
Tempestuous Temperaments 2004-05-20
Tempestuous...
2004-05-20
Fuu is a young waitress in search of a Samurai who smells of sunflowers, but she has some unexpected company with her. Mugen and Jin are two samurai who want to kill each other and are always getting arrested. Can these three learn to work with each other?

7
A Risky Racket 2004-07-08
A Risky Racket
2004-07-08
A thief was running around town, while Fuu, Jin, and Mugen were going to get some soup. Fuu was daydreaming and the thief accidently bumped into Fuu. When Fuu was paying for the soup, she noticed that her purse was gone and said that the man she bumped into took the money. Will Fuu ever get her...

8
The Art of Altercation 2004-07-15
The Art of...
2004-07-15
A man hunting for Jin has been challenging any samurai wearing glasses he can find, accompanied by a beat-boxing duo of underlings. The question arises as to whether or not he will recognize Jin when he becomes infatuated with Fuu, for Jin has had to pawn his glasses.

9
Beatbox Bandits 2004-07-22
Beatbox Bandits
2004-07-22
Mugen, Jin, and Fuu need to cross a border so they purchase Travel Passes since they dont have any.The Travel Passes turn out to be fake. Mugen, Jin, and Fuu are sentenced to death. The guards were going to have them killed until they found out about a errand they needed to run. So they send...

18
War of the Words 2005-01-22
War of the Words
2005-01-22
Fuu gets a facelift when kids trade in the sword for the graffiti brush; Jin keeps a promise to a long-lost friend and confronts the shock of the new, while Mugen learns to read and conquers a castle.

19
Unholy Union 2005-01-29
Unholy Union
2005-01-29
A cynical charlatan fleeces the Hidden Christian flock, Fuu gets closer to the Sunflower Samurai, and a truth is finally revealed.

22
Cosmic Collisions 2005-02-19
Cosmic Collisions
2005-02-19
On the way to Nagasaki the trio falls in a hole and ends up in a mine. The trio ends up working for the owner of the mine for a share of the treasure. As the days drag on Fuu discovers that they are becoming more and more like the seemingly-alive workers.

23
Baseball Blues 2005-02-26
Baseball Blues
2005-02-26
An anachronistic batch of American belligerents sail into town and a canny ninja-turned-team manager enlists our heroes to do battle with them on the field of honor...which in this case is a baseball diamond. Behold Mugens pitching skills and tremble!

24
Evanescent Encounter (1) 2005-03-05
Evanescent...
2005-03-05
Fuu, Mugen and Jin have finally arrived in Nagasaki to find Ikitsuki island in search of the Sunflower Samurai. There seems to be one small problem that might keep them from getting there though. A group of assassins are following closely behind.

26
Evanescent Encounter (3) 2005-03-19
Evanescent...
2005-03-19
As Fuu finally confronts the Sunflower Samurai, Mugen and Jin face their ultimate tests. While Mugen must face one of the three insane brothers, Jin continues his battle with Kagetoki Kariya. And theres the small matter of their own duel...