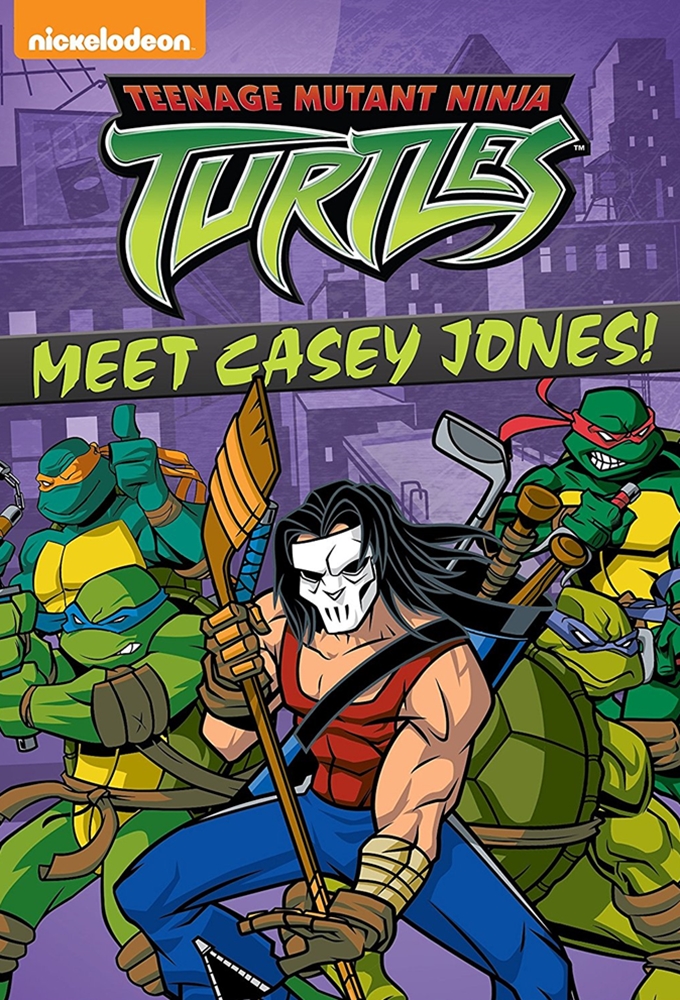 This version of Teenage Mutant Ninja Turtles draws more references and plotlines from the original comics than the original television series did. Four turtles are contaminated with ooze, a radioactive substance that causes four turtles to change into humanoids. Their Master Splinter, a rat whom also came in contact with the ooze, teaches them the art of ninjitusu. Leonardo, Raphael, Donatello, and Michelangelo are Splinters disciples who are now ready to take on forces that oppose... (TheTVDB)
Action Äventyr Animerat Barn Science-Fiction

SPECIAL
1
2
3
4
5
6
7
SÄSONG 1

1
Things Change 2003-02-08
Things Change
2003-02-08
In their underground lair deep beneath the city streets, in the middle of an intense training session, the Turtles and Master Splinter are suddenly attacked by a horde of Mouser robots! These mechanical menaces chomp through everything: stone, steel... Turtles! In the course of the battle, the...
Regisserat av:

2
A Better Mousetrap 2003-02-15
A Better Mousetrap
2003-02-15
The Turtles discover the source of the Mouser robots that trashed their old lair: Dr. Baxter Stockman a noted technological genius/inventor, who tries to pass off the Mousers as a means to eradicate the citys rat problem. Donatello gets one of the broken Mousers working and the Turtles chase it...
Regisserat av:

3
Attack of the Mousers 2003-02-22
Attack of the...
2003-02-22
When April ONeil wakes up in the Turtles lair she has major trouble dealing with the reality of four giant talking Turtles and a Zen-master rat. She soon learns of the origin of the Teenage Mutant Ninja Turtles and they realize their common enemy is Baxter Stockman and his army of robotic Mousers.

4
Meet Casey Jones 2003-03-01
Meet Casey Jones
2003-03-01
Raphael is a little cooped up underground with only his brothers and Master Splinter. When Raphael almost clobbers Michelangelo in some brotherly sparring, its apparent that Raphael needs to get out let off a little steam. But when he meets up with Casey Jones, a vigilante erring a little to the...

5
Nano 2003-03-08
Nano
2003-03-08
When a scientist accidentally unleashes a super-powered Nanotech monster with a childlike mind, it adopts a small-time thief as its father figure, and the mayhem begins! Their crime spree targets Aprils new antique shop, and the Turtles come to her rescue. But how do you stop something that...

6
Darkness on the Edge of Town 2003-03-15
Darkness on the...
2003-03-15
The Turtles, investigating a strange blackout, discover the Foot Ninja stealing a Japanese ceremonial sword from the Museum. But this is no ordinary sword. And just what do the Foot intend to do with it?

7
The Way of Invisibility 2003-03-22
The Way of...
2003-03-22
After Casey Jones makes himself an unwanted guest in the Turtles lair, Raphael takes him topside for a breath of fresh air, where they encounter the Foot Tech Ninjas - enhanced soldiers able to turn themselves invisible. Raph is caught and interrogated, but Casey manages to slip away and warn the...

8
Fallen Angel 2003-03-29
Fallen Angel
2003-03-29
On a nightly training run, the Turtles and Casey Jones break up a Purple Dragon robbery. One of the perps is Angel, a girl Casey knows from the neighborhood whos going through her initiation rites to become a Purple Dragon. Casey tries to stop Angel from going down the wrong path, but ends up...

9
Garbageman 2003-04-05
Garbageman
2003-04-05
The boys have made friends with a group of homeless, and are worried when they start mysteriously disappearing into the night! Some Turtle-style detective work leads them to the Garbageman, an immense, smelly egomaniac, who is kidnapping the homeless for slave labor to build an empire on a...

10
The Shredder Strikes (1) 2003-04-12
The Shredder...
2003-04-12
Shredder attempts to convince Leonardo that the Foot are fighting the good fight and the turtles should stand with him. Leonardo is taken in and almost convinces the others until Splinter reveals what he knows of the Shredder. Leonardo realizes hes been fooled - its never a good idea to fool a...

11
The Shredder Strikes (2) 2003-04-19
The Shredder...
2003-04-19
Our four turtles stand facing their most formidable foe to date - the Shredder. Battle weary, the turtles cannot stand against the Shredder and manage to slip away getting separated in the process. Can they survive apart? Can they get back together in time to save themselves and face the Shredder?...

12
The Unconvincing Turtle Titan 2003-05-03
The Unconvincing...
2003-05-03
Believing the Turtles can accomplish so much more for the city, and inspired by iconic superhero Silver Sentry, Michelangelo decides to take a crack at being a superhero. But he soon discovers superhero-ism is not all its cracked up to be. Worse still, he stumbles upon a mind-control experiment by...
Regisserat av:

13
Notes from the Underground (1) 2003-05-10
Notes from the...
2003-05-10
When Dons examination of some mysterious crystals attracts the attention of a subterranean monster, the Turtles underground exploration unearths a Foot Genetics Lab! A video record of strange experiments reveals more of Shredders mysterious agenda, but when the mutants attack, the boys better watch...
Regisserat av:

14
Notes from the Underground (2) 2003-05-17
Notes from the...
2003-05-17
After discovering an abandoned underground Foot Genetics Lab, and being attacked by the once-human Quarry, the Turtles assist them in trying to repair a force field to protect them against the mindless beasts roaming the tunnels. But the force field needs a new crystal power source, and the only...
Regisserat av:

15
Notes from the Underground (3) 2003-05-24
Notes from the...
2003-05-24
When the Turtles and their new allies start vanishing one by one, only Michelangelo is left. He finally finds the perpetrator in the underground city - its sole survivor. Though his intentions appears noble at first, by restoring the creatures to their normal human selves, there is a catch...
Regisserat av:

16
The King 2003-05-31
The King
2003-05-31
With all the turtles living in Aprils apartment, things are getting a little crazy. Donatello meets up with Kirby, an artist renting Aprils basement apartment. Through the powers of a mysterious crystal tied to his pencil, Kirby is able to create anything he draws including his own world - a world...
Regisserat av:

17
The Shredder Strikes Back (1) 2003-06-07
The Shredder...
2003-06-07
On a training run Leo is ambushed by a major Foot attack force, including Foot Tech Ninjas, Hun, and a new threat: the Foot Elite! At their temporary home at Aprils apartment, Don, Raph and Mikey tire of wait for Leo to get back and decide to go look for him. But is it too late?

18
The Shredder Strikes Back (2) 2003-06-14
The Shredder...
2003-06-14
When the Foot Ninja attack Aprils apartment in force, the Turtles fight against overwhelming odds to get the wounded Leo to safety. The Shredder raises the stakes, trapping our heroes in the burning Antique Shop with no way out!

19
Tales of Leo 2003-09-13
Tales of Leo
2003-09-13
The Turtles, Splinter, Casey and April just barely manage to escape from the explosion that destroys the antique store. They hit the road and hide out at Caseys grandmothers old farmhouse, but Leonardo is badly wounded, drifting in an out of consciousness. As he attempts to recover, the Turtles and...

21
Return to New York (1) 2003-09-27
Return to New York...
2003-09-27
With Leo fully recovered the goal is clear: to destroy the Shredder once and for all. With April providing remote computer assistance, the Turtles begin their assault on the Foot HQ skyscraper, fighting their way to the top floor by floor. They battle an army of Foot Ninja Guards and the deadly...

22
Return to New York (2) 2003-10-04
Return to New York...
2003-10-04
The Turtles and Splinter continue to fight their way up through the Foot Headquarters skyscraper to face the Shredder. But they now have to face off against some Shredder Clones, the Foot Tech Ninja and the powerful Foot Mystics! As if that wasnt bad enough, Baxter Stockman decides now is the time...

23
Return to New York (3) 2003-10-11
Return to New York...
2003-10-11
With Stockman showing up in the middle of the final battle, our heroes must temporarily join forces with the Shredder to defeat his exo-suit before he annihilates them all. With everything working against them, high atop the Shredders skyscraper, can our turtles emerge victorious?! And what roll...

24
Lone Raph and Cub 2003-10-18
Lone Raph and Cub
2003-10-18
With Splinter mysteriously vanished, the Turtles are feeling frustrated, not knowing where to start looking. Impatient with strategizing, Raph heads off on his own - and straight into trouble, of the mobster kind!

25
The Search for Splinter (1) 2003-10-25
The Search for...
2003-10-25
As the Turtles continue their search for Splinter, they turn their attention to the Guardians. The trail soon leads them to a building marked as TCRI - the same letters on the canister of ooze responsible for their mutation! Now with two reasons to infiltrate that building, the Turtles recruit both...

26
The Search for Splinter (2) 2003-11-01
The Search for...
2003-11-01
The Turtles successfully infiltrate the mysterious TCRI building, and locate the unconscious Splinter inside a stasis tank. But they also discover that theres more to the technicians inside then meets the eye...
Regisserat av: