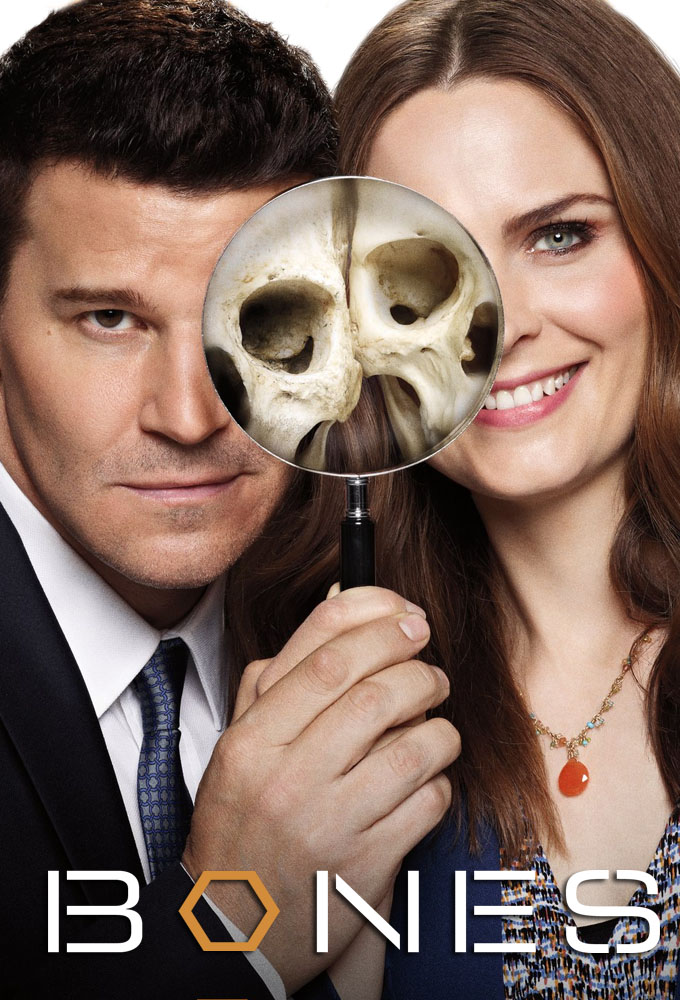 (2005)
Originaltitel: Bones
Skapad av: Hart Hanson
Release: 2005-09-13
TV-bolag: FOX (US)
Längd per avsnitt: 45 min min
Status: AVSLUTAD
F.B.I. Agent Seeley Booth is teamed up with forensic anthropologist Dr. Temperance "Bones" Brennan to solve some of the most baffling and bizarre crimes ever. Booth depends on clues from the living, witnesses and suspects, while Brennan gathers evidence from the dead, relying on her uncanny ability to read clues left behind in the bones of the victims. (TheTVDB)
Komedi Crime Drama

3
A Boy in a Tree 2005-09-27
A Boy in a Tree
2005-09-27
When the decaying corpse of the Venezuelan Ambassadors son is found hanging from a tree on the campus of an exclusive private school, a simple suicide case quickly turns into a web of lies, sex and scandal involving the schools staff and students.
Regisserat av:

8
The Girl in the Fridge 2005-11-29
The Girl in the...
2005-11-29
Brennan is about to go out for dinner with her old professor and ex-lover when Booth asks her and her team to help identify the remains of a young woman found in a refrigerator.
Regisserat av:

9
The Man in the Fallout Shelter 2005-12-13
The Man in the...
2005-12-13
Brennan and her team are brought in to identify the body of a man found in a fallout shelter. While cutting into the bones of the man, Zach accidentally releases a deadly fungus, causing the team to be quarantined over Christmas.
Regisserat av:

10
The Woman at the Airport 2006-01-25
The Woman at the...
2006-01-25
Brennan and Booth investigate the body parts of a woman found near L.A. International Airport. Their investigation is slowed due to extensive cosmetic surgery the victim had done.
Regisserat av:

12
The Superhero in the Alley 2006-02-08
The Superhero in...
2006-02-08
Brennan and Booth investigate the origins of a decomposed body thats been found in a local alley and determine its the remains of a shy teen with an alter ego.
Regisserat av:

13
The Woman in the Garden 2006-02-15
The Woman in the...
2006-02-15
Booth and Brennan investigate when a dug up corpse is found in the back of a gang members car. While being questioned, a drive-by shooting allows him to escape. Booth and Brennan follow the clues, which lead them to an empty grave and another body in a grave at a wealthy senators house, where the...
Regisserat av:

14
The Man on the Fairway 2006-03-08
The Man on the...
2006-03-08
Brennan and Zach investigate a small jet crash that was carrying some Chinese diplomats and a woman. At the crash site, Brennan finds some bone fragments that do not belong to any of the passengers, but might belong to a man who has been missing for five years. Although ordered to work only on...
Regisserat av:

15
Two Bodies in the Lab 2006-03-15
Two Bodies in the...
2006-03-15
When Brennan decides to give online dating a try, she ends up the target of a shooting at the local restaurant where shes meeting her date. The resulting investigation reveals that the shooter could be connected to either of the two cases shes currently working on.
Regisserat av:

16
The Woman in the Tunnel 2006-03-22
The Woman in the...
2006-03-22
Brennan and Booth stumble upon a subterranean world of homeless people when they find the remains of a filmmaker in the ventilation shaft of an underground tunnel.
Regisserat av:

17
The Skull in the Desert 2006-03-29
The Skull in the...
2006-03-29
While on vacation, Angelas boyfriend goes missing . When a skull shows up, she asks Brennan for help in identification, concerned it might be her boyfriend or the female guide who went missing with him. The investigation leads the team to a violent boyfriend, the local sheriff and ultimately to a...
Regisserat av: