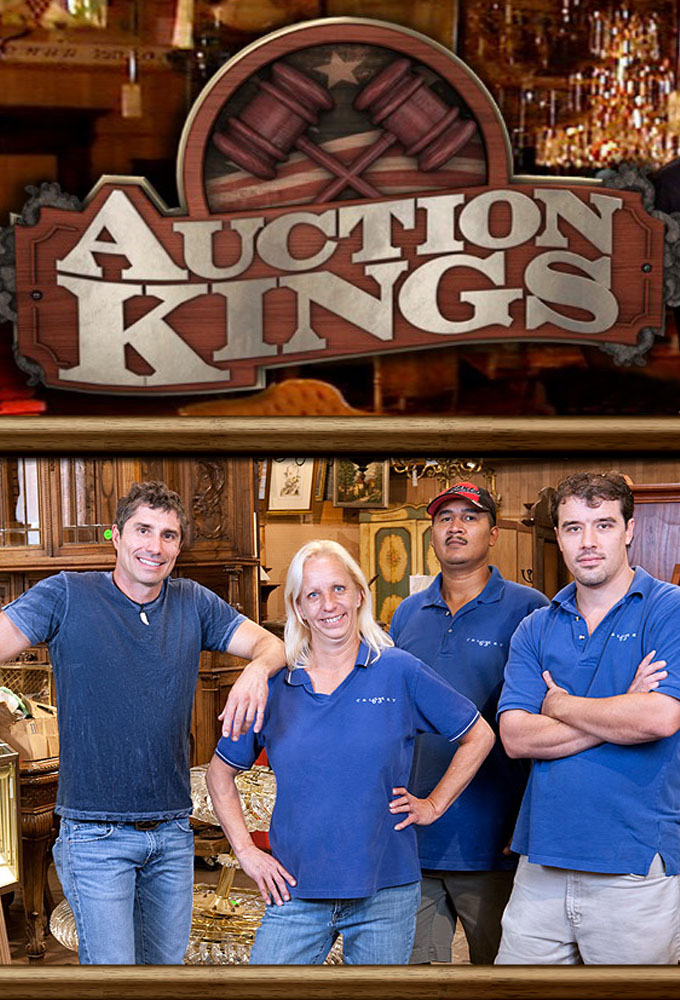 (2010)
Originaltitel: Auction Kings
Release: 2010-10-26
TV-bolag: Discovery
Längd per avsnitt: 30 min min
Status: AVSLUTAD
Buyers in the Atlanta area searching for those one-of-a-kind items -- a vampire hunting kit, anyone? -- know exactly where to go, but the quantity is always limited and the prices fluid. ``Auction Kings follows the action at Gallery 63, a storied auction house in Hotlanta with a reputation for selling both bizarre and high-end items. Its owner, Paul Brown, manages his feisty staff and mingles with his customers, bidders and buyers who come from all walks of life. (TheTVDB)
Reality

1
2
3
4
SÄSONG 1

1
Vampire Hunting Kit/Meteorite 2010-10-26
Vampire Hunting...
2010-10-26
One seller comes into Gallery 63 with a softball-sized meteorite, hoping to fetch enough money to take a second honeymoon to Paris, while another brings in a vampire-killing kit from the 1800s that could go for big bucks — if the right buyer attends the auction. Then Jon, the newest employee, is...

2
Love Meter/Knights of Templar Sword 2010-10-26
Love Meter/Knights...
2010-10-26
Delfinos handyman skills are put to the test when picker Jon uncovers a classic Love Meter arcade game. Meanwhile, a monk brings in a 1637 prayer book that was brought to America during the Revolutionary War and used in the church attended by some of the Founding Fathers. It could bring in $5,000...

3
Ladies Muff Pistols/John Hancock's Book 2010-11-02
Ladies Muff...
2010-11-02
A collector brings in a pair of 19th-century ladies pistols designed to be concealed in a hand muff, while another seller offers for auction an early-print Great Gatsby and a book signed by John Hancock. Then Jon, picking through a cluttered basement, manages to uncover a Venetian mirror that could...

4
Rolling Stones' Snooker Table/Aliens 2010-11-02
Rolling Stones'...
2010-11-02
A seller brings in a snooker table he built for the Rolling Stones to use on tour, which an expert appraiser proclaims could sell at a sky-high price. A woman puts an amazing collection of rare African artifacts â€“- including an elephant mask, two iron throne chairs, and a terracotta honey...

5
Iwo Jima Sword/Cathouse Chairs 2010-11-09
Iwo Jima...
2010-11-09
Owner Paul Brown and Gallery 63 team prepare for their next auction, which includes a 1969 Oldsmobile 442, two chairs reportedly from a New Orleans cathouse, and a WWII Japanese rifle and sword still partially wrapped in the 60-year-old paper used to mail them home from the battlefield.!

6
Dinosaur Tooth/Victorian Furniture 2010-11-09
Dinosaur...
2010-11-09
The Gallery 63 crew struggles with manager Cindy Shooks new stress release, a drum set Jon brought in on a pick. Paul Brown takes rookie picker Jon Hammond to meet a client auctioning off his collection of sentimental Victorian furniture, including a settee and a piano, while a fossil-hunting...

7
Pink Cadillac/Baseball Memorabilia 2010-11-16
Pink...
2010-11-16
Looking for funds to buy a new tour bus, a rock-a-billy musician cruises to Gallery 63 in a gleaming pink 1960 Cadillac. A wife unloads her husbands model tugboat, but itll need some of Delfinos magic before it can be sold in working order. And a collector brings in historic Negro League baseball...

8
Spy Watch/Model A 2010-11-16
Spy Watch/Model A
2010-11-16
Owner Paul Brown and Gallery 63 team prepare for their next auction, which includes a Model A Ford and Lion King concept sketches. Cindy reminds the team of her picking prowess when she brings in a weekend find: a 1950s spy watch/recorder that still has historic voices on it.

9
Triumph Chopper/Ruby Necklace 2010-11-21
Triumph...
2010-11-21
Auctions are a risky business, with seemingly worthless items often selling big while fabulous items fall flat -- and its up to Cindy to teach Jon how to identify what will sell. This week, a man walks in with a 92-carat ruby necklace hes been keeping in a shoebox, another brings in a classic 1967...

10
Hand Cannon/Faberge Pencil 2010-11-23
Hand Cannon/Faberge...
2010-11-23
A seller brings in an ancient hand cannon so old and so rare, even the experts struggle to determine its origin and history. Also a mystery is a tiny jewel-encrusted gold pencil that might just be Faberge. Meanwhile, Delfino struggles to revive a 90-year-old sour-sounding player piano and a woman...

11
Hot Air Balloon/Wooly Mammoth Tusk 2010-11-30
Hot Air...
2010-11-30
Office manager Cindy faces her fears and gets the ride of her life when she and Paul go up in a hot-air balloon thats up for auction, along with a woolly mammoth tusk and a giant, unset sapphire.

12
Headhunter Ax/Vintage Coke Machine 2010-12-07
Headhunter...
2010-12-07
On the block: a headhunters ax and a rare Vespa scooter with sidecar; meanwhile, Gallery 63 owner Paul Brown and his manager Cindy Shook have a bidding war of their own over a vintage Coke machine.

13
Samurai Sword/Steamer Trunk 2010-12-14
Samurai...
2010-12-14
A wooly mammoth tusk and a giant, unset sapphire go up for auction. Then manager Cindy faces her fears and gets the ride of her life when she and Paul go up in a hot-air balloon with a client who wants to sell it.

14
Johnny Cash Guitar/Speed Rug 2010-12-21
Johnny Cash...
2010-12-21
Gallery 63 team prepare for their next auction, which includes Johnny Cashs autographed guitar, a trading knife made from a jawbone, and a 17th-century chest for treasures. Paul and manager Cindy initiate picker Jon in the much dreaded Speed Rug.

15
Lindbergh Scrapbook/Antique Toys 2010-12-28
Lindbergh...
2010-12-28
With a historic Charles Lindbergh scrapbook and a collection of antique metal toys already on the block, Paul Brown also takes a gamble on a rare Wurlitzer band organ. But will it pay off?

16
Napoleon Mirror/WWI Boy Scout Poster 2011-01-04
Napoleon Mirror/WWI...
2011-01-04
Before auctioning off a hand mirror signed by Napoleon and a World War I Boy Scout war bonds poster, Gallery 63 owner Paul Brown calls in his antique-expert sister to shed some light on a mysterious cabinet, and picker Jon Hammond goes all out to impress his boss by helping assemble the upcoming...

17
Shrunken Head/MLK Letter 2011-01-11
Shrunken Head/MLK...
2011-01-11
A letter signed by Rev. Martin Luther King and doll furniture created by famous folk artist Howard Finster go on the block; a woman brings in what she believes to be a shrunken head; and Paul enlists his mentor and father, Bob Brown, to help entice Pauls son Elijah to go into the family...

18
Happy Days Pinball/Wall of Shame 2011-01-18
Happy Days...
2011-01-18
A vintage slot machine, a pinball machine used on Happy Days and a 1940s Whizzer motorized bicycle all go up for auction. Then Jon takes a World War II Soviet flag to a lab to authenticate its blood stain, and not even Paul can escape Cindys Wall of Shame for people who dont pay their bills.