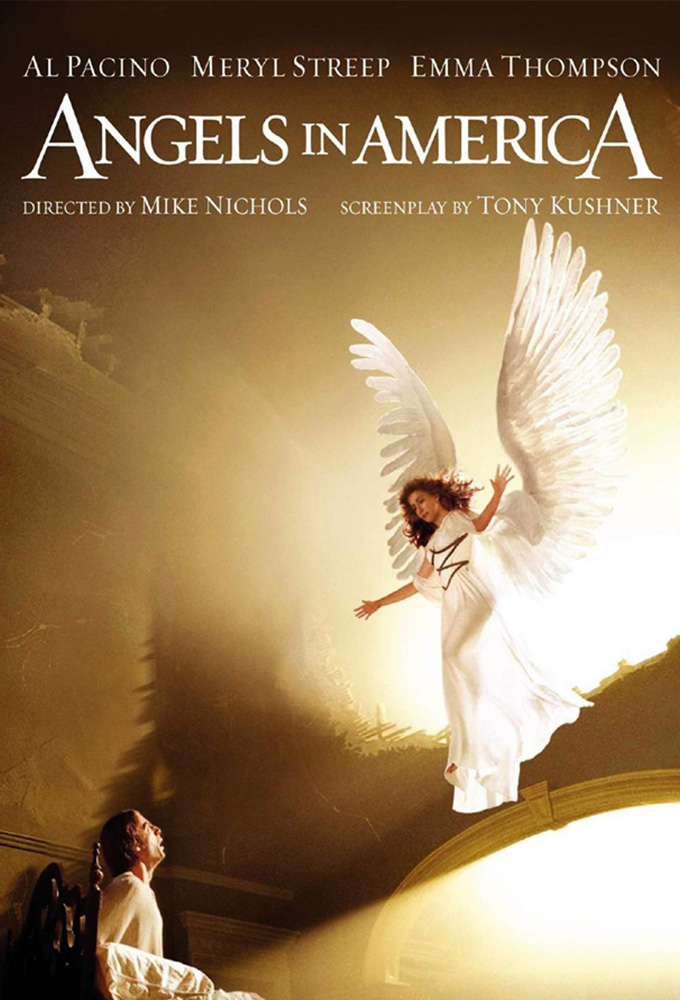 (2003)
Originaltitel: Angels in America
Release: 2003-12-07
TV-bolag: HBO
Längd per avsnitt: 55 min min
Status: AVSLUTAD
New York City, 1985. Prior Walter announces to his boyfriend Louis Ironson that he has been diagnosed with AIDS. Unable to cope with this, Louis leaves. This abandonment leaves Prior shattered. At the same time, Roy Cohn, a powerful lawyer and a right-wing political conservative is diagnosed with AIDS but demands that his doctor say that he has liver cancer as he does not want his homosexuality known in the circles he moves in. Cohn grooms his assistant, the milquetoast Mormon lawyer... (TheTVDB)
Drama

2
Millennium Approaches - In Vitro 2003-12-07
Millennium...
2003-12-07
Louis abandons a hospitalized Prior; Joe and Roy confide in each other over drinks. Later, Prior hears voices from his hospital bed while Louis solicits sex from strangers, and Joe makes a drunken confession to his mother.
Regisserat av:

3
Millennium Approaches - The Messenger 2003-12-07
Millennium...
2003-12-07
Prior returns home and is visited by a pair of spectral namesake ancestors who herald the arrival of the messenger; a tussle with Joe leaves Roy with the ghost of Ethel Rosenberg. Later, Joe and Louis hook up in Central Park while Prior meets the angelic messenger.
Regisserat av:

4
Perestroika - Stop Moving 2003-12-14
Perestroika - Stop...
2003-12-14
While Joe is being seduced by Louis, Prior is being aroused by the baffled Angel. Meanwhile, Roys health worsens; Harpers hallucination is interrupted by reality; Prior tells Belize about his divine mission; and Hannah tries to help Harper.
Regisserat av:

5
Perestroika - Beyond Nelly 2003-12-14
Perestroika -...
2003-12-14
Louis arranges a meeting with Prior; Joe visits Roy in the hospital and gets an unwelcome fathers blessing; Prior drags Belize to the courthouse for a surprise meeting with the clerk and later strikes up a friendship with Hannah. High on morphine, Roy paints a different picture of heaven.
Regisserat av:

6
Perestroika - Heaven, I'm in Heaven 2003-12-14
Perestroika -...
2003-12-14
A fight with Joe leaves Louis badly scarred; Roy plays a final practical joke on Ethel; Prior wrestles the Angel and then addresses a review board in Heaven; Harper heads out West; Prior, outliving his diagnosis, pays a visit to his favorite angel and vows to keep living--free of secrets.
Regisserat av: