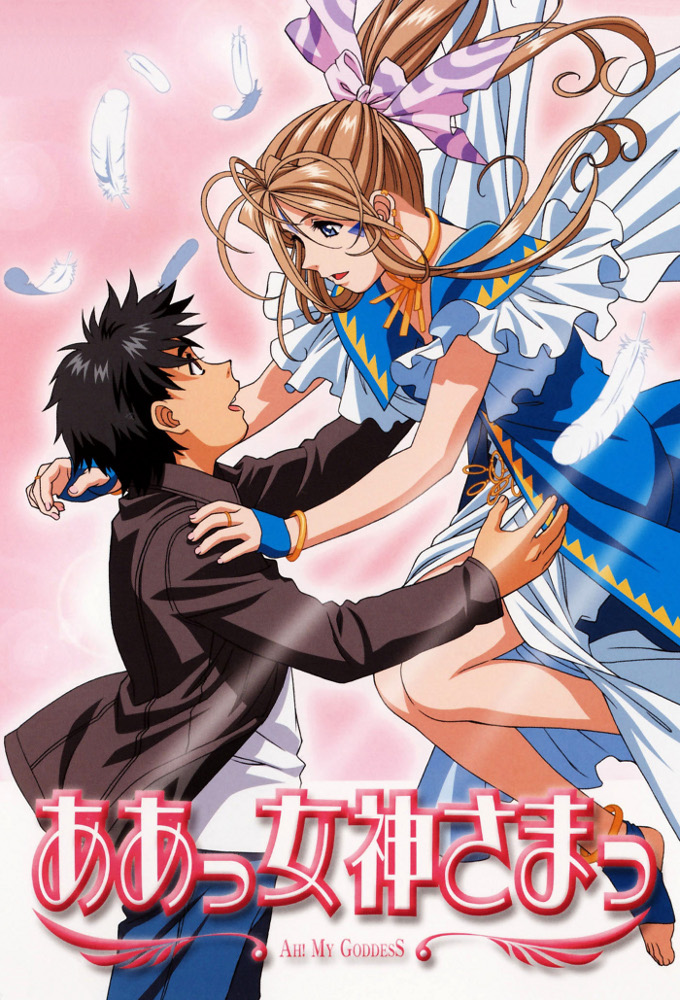 (2005)
Originaltitel: Aa Megamisama
Release: 2005-01-06
TV-bolag: WOWOW
Längd per avsnitt: 25 min min
Status: AVSLUTAD
Keiichi was looking forward to university life. But in reality, he had no luck in clubs, love, and life in general. The truth is that he had an unlucky star above his head. One day, Keiichi was stuck watching the dorm while his senpai left, and they had left him a mountain of chores to do, too. Keiichi was a good-natured person, and set about doing his duties. His final chore was to make a phone call. The responce he got from his misdialed number was, "Goddess Assistance Agency." Out... (TheTVDB)
Animerat Komedi Fantasy

2
Ah! People Who Believe Are Saved? 2005-01-13
Ah! People Who...
2005-01-13
Keiichi makes his wish that Belldandy will stay with him forever, and it becomes true! And it cant be undone; the wish has been registered with the system. Keiichi ponders what to do now, but his senpais Tamiya and Otaki arrive and find that hes broken the rules about having girls in the all-guys...
Regisserat av:

4
Ah! The Queen and the Goddess 2005-01-27
Ah! The Queen and...
2005-01-27
Keiichi takes Belldandy to his school, and all the classmates are impressed by the new girl. Sayoko, the popular girl on campus, meets Belldandy and tries to figure out where she came from. Realizing her popularity is dwindling, Sayoko tries to get in between Keiichi and Belldandy, accusing her...
Regisserat av:

5
Ah! Under One Roof 2005-02-03
Ah! Under One Roof
2005-02-03
Keiichi left his books and papers at home, so Belldandy goes back to get it. As Keiichi is left alone at school, Sayoko challenges him to stop acting like hes in elementary school with that relationship. Keiichi struggles on what to say to Belldandy. He sets up a romantic mood at home with...
Regisserat av:

6
Ah! Unexpectedly Finding Something... 2005-02-10
Ah! Unexpectedly...
2005-02-10
A young woman shows up at the temple where Keiichi is staying. It turns out to be Keiichis sister Megumi, who is in town looking for apartment housing. Keiichi and Belldandy help Megumi find a place, but it has a dark secret.
Regisserat av:

8
Ah! Taking an Examination of Love,... 2005-02-24
Ah! Taking an...
2005-02-24
Keiichi gets a video from a store, but when he plays it, a mysterious woman shows on the screen. The woman is Urd, who is Belldandys older sister. Urd tries to move Keiichis romantic intentions forward by slipping him a controlling love potion.
Regisserat av:

9
Ah! The Secret of the Queen and the... 2005-03-03
Ah! The Secret of...
2005-03-03
Belldandy wins the Miss NIT contest and becomes Campus Queen. Sayoko and Toshiyuki try to uncover Belldandys identity by setting up revealing situations where Belldandy would have to use her magic, but with big sister Urd watching, that isnt so easily done. Toshiyuki manages to put Urd to sleep...
Regisserat av:

10
Ah! Can the Motor Club Win? 2005-03-10
Ah! Can the Motor...
2005-03-10
The Nekomi Motor Club is recruiting new members, but now theres a new rival club called Four Wheels that was started by Toshiyuki. The motor clubs have a challenge race over who gets to keep their club around. Keiichi and Belldandy get to represent Nekomi in the race, but where theres Toshiyuki...
Regisserat av:

11
Ah! A Devil Comes and Bestows... 2005-03-17
Ah! A Devil Comes...
2005-03-17
Tamiya and Otaki buy a strange Demons CD from a store. Not only is the music strange, but a spirit shoots out of the CD and asks what wish they want. Not caring they just wish her to go away. The spirit is the demon Marlier (aka Mara), and shes ready to mess up the goddesses plans. Now that the...
Regisserat av:

12
Ah! Put the Goddess and Queen on a... 2005-03-24
Ah! Put the Goddess...
2005-03-24
Marlier offers Sayoko a plan to get Belldandy out of the way. Sayoko tricks Urd and steals the Demons CD. Marlier casts a spell to tip Keiichis heart balance so that Keiichi becomes fixated on Sayoko. After Belldandy goes home feeling strange, Sayoko is alone with Keiichi. This is her big...
Regisserat av:

13
Ah! Who Does Onee-sama Belong to? 2005-04-07
Ah! Who Does...
2005-04-07
More goddess-related system problems arise because of Belldandys unstable heart. A new girl shows up at the temple, and its Belldandys kid sister Skuld! Shes there to deal with the outbreak of bugs but also has an ulterior motive, to bring Belldandy back to heaven. To complicate things, Skulds...
Regisserat av:

14
Ah! A Teaching Practice Called Showdown? 2005-04-14
Ah! A Teaching...
2005-04-14
Skulds been spending a lot of time with Belldandy, but Belldandy still wants to go to school with Keiichi. Skuld decides to take apart Keiichis bike, but ends up upgrading it. Megumi notices the upgrades and starts to critique it. This upsets Skuld, who issues Megumi a mechanics challenge. At...
Regisserat av:

15
Ah! Captivated by a Goddess? 2005-04-21
Ah! Captivated by a...
2005-04-21
Skuld reveals her latest invention: Banpei-kun RX. Banpei is a robot designed to protect Belldandy, which he does easily as Marlier shows up for an attack. But that also means protecting her from Keiichi and Urd and draining tons of power from the house. Can Skuld teach Banpei to play nice? And...
Regisserat av:

16
Ah! Catastrophe Comes with Rise of an... 2005-04-28
Ah! Catastrophe...
2005-04-28
Marliers attacks on the goddesses keep failing so she goes for a new target: Megumi! She takes over Megumis body, and solicits the help of Senbee, the God of Poverty and generally bad luck spirit.
Regisserat av:

18
Ah! The Fated Confession Is Under the... 2005-05-12
Ah! The Fated...
2005-05-12
Megumi gives Keiichi some tickets to a beach resort. Keiichi and Belldandy go, but the sisters tag along as well. Urd tells Keiichi theres an island spot where if he confesses it will be true love. Keiichi tries to take Belldandy to that remote island location, but Skuld has other plans.
Regisserat av:

19
Ah! Don`t Gaze at Me with Those Eyes? 2005-05-19
Ah! Don`t Gaze at...
2005-05-19
Urd makes a love candy for Keiichi, but Skuld suspects something and slips in some additional ingredients. Belldandy consumes it, and she becomes very romantically bold in all her actions and with Keiichi too!
Regisserat av:

20
Ah! Save the Goddess, If You're a Man!? 2005-05-26
Ah! Save the...
2005-05-26
Urd and Skuld leave to do some work back at heaven. Skuld has Keiichi eat some flan which transforms Keiichi into a woman. Now hell keep his hands off Belldandy, right? Keiichi and Belldandy go through Urds potion ingredients to find an antidote but the formula goes wrong and Belldandy catches...
Regisserat av:

21
Ah! The One I Yearn for Is a... 2005-06-02
Ah! The One I Yearn...
2005-06-02
Skuld admires Belldandys angel and wants to have one as well. Skuld tries training her skills with inventions. Then something ouside threatens the girls and its up to Urd to summon her angel, but its revealed that Urd cant because she told her angel earlier to never come out ever again. What...
Regisserat av:

22
Ah! A Devil's Whisper, Along with a Pot? 2005-06-16
Ah! A Devil's...
2005-06-16
Mara retrieves a demonic urn from a cave. Urds goddess license had been suspended, which motivates her to look for a regular job. But when things go bad there she accepts her demonic heritage and transforms into the Lord of Terror! Big Trouble for Keiichi and the gals!
Regisserat av:

23
Ah! The Savior, Together with the Sound... 2005-06-23
Ah! The Savior,...
2005-06-23
The Yggdrasil system is in chaos from all the attacks from the Lord of Terror. Urd starts releasing the Ultimate Destruction Program which will not only destroy the current world but allow the demons to rule it. Belldandy decides to release her sealed power and confront Urd. God gives Skuld a...
Regisserat av:

24
Ah! I'm Always with You 2005-07-07
Ah! I'm Always with...
2005-07-07
Its the final showdown where the goddesses, Belldandy and Skuld, battle against the Lord of Terror, who has now possessed Midgard! With the whole world at stake, what can Keiichi do to help? Perhaps another attempt at the flute will do the trick, and that almost works, except now the Lord of...
Regisserat av:

25
Ah! Urd's Little Romance 2005-12-23
Ah! Urd's Little...
2005-12-23
The goddesses are working overtime to restore the damage done by the Lord of Terror, but in order to conserve energy, Urd automatically reverts to her younger form. The more energy she uses, the younger she becomes. While waiting for Yggdrasil to come back online, she is thrust into an unlikely...
Regisserat av:

26
Ah! Is My Heart Pounding Because I'm a... 2005-12-23
Ah! Is My Heart...
2005-12-23
Yggdrasils downtime causes Skuld to become a grown woman. She has until sundown, when Yggdrasil is restored, to experience life as an adult. After escaping an uncomfortable situation with Toshiyuki Aoshima, Skuld explores her newly grown feelings for Keiichi, and asks him to go out with her the...
Regisserat av: