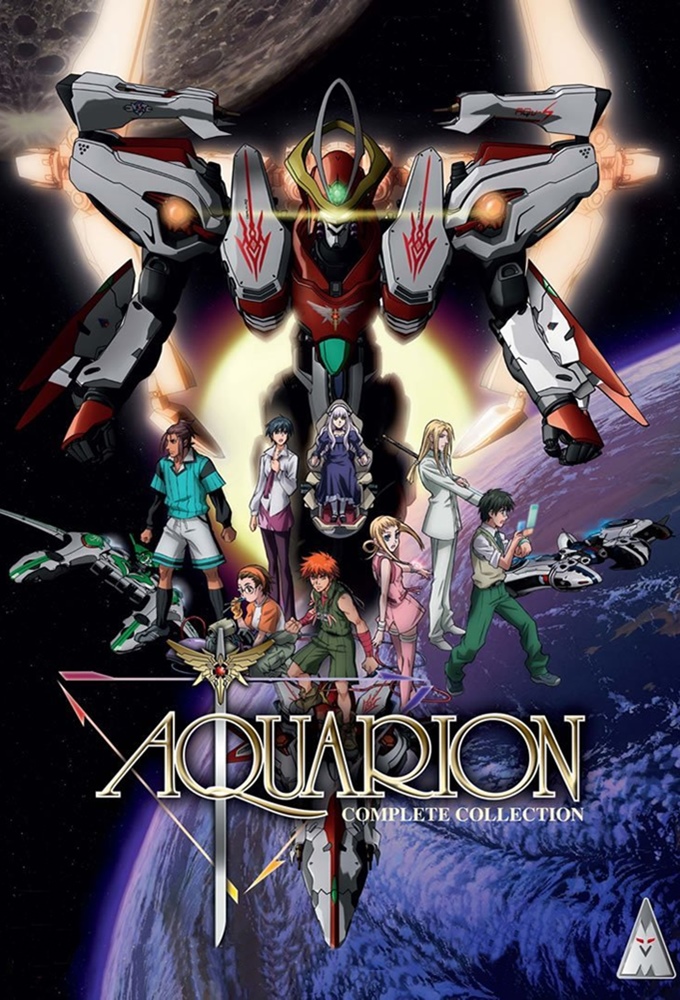 (2005)
Originaltitel: Sôsei no Aquarion
Release: 2005-04-04
TV-bolag: TV Tokyo
Längd per avsnitt: 25 min min
Status: AVSLUTAD
In a distant future, humanity once again is facing the threat of the "Shadow Angels". Mystical creatures who returned after 12.000 years of absence. They attack human cities and kidnap their inhabitants in order to drain their "prana" (vital energy). To fight against them, youngsters with special powers from arround the world were gathered and trained to pilot the "vector machines", three ancient ships that together form mankind's ultimate weapon, "Aquarion". The story revolves mainly... (TheTVDB)
Animerat Science-Fiction

SPECIAL
1
2
3
SÄSONG 1

1
Memories of an Angel 2005-04-04
Memories of an Angel
2005-04-04
Pierre Vieira and Silvia de Alisia are out on a mission in Arc City to find the reincarnation of the Solar Wing, and their current target is an orphan named Apollo. However, Shadow Angels suddenly attack the town, and DEAVA sends out a Vector unit consisting of Sirius de Alisia, Glen Anderson and...
Regisserat av:

2
The Beast of Darkness 2005-04-11
The Beast of...
2005-04-11
After the battle, Apollo has been put into detention until DEAVA can find out more about him. Meanwhile, Sirius, Raika and Silvia head out to battle more Shadow Angels, but trouble arises as yet another Cherubim arrives. It is revealed though, that these Angels are but mere soldiers, as this one is...
Regisserat av:

3
Element School 2005-04-18
Element School
2005-04-18
Apollo enters the Element school, where the Elements train. The new recruits - Apollo, Jun Lee and Tsugumi Rosenmeier - then enter a training simulator, and Apollo ends up being partnered with Silvia. In the simulator, the two accidentally shares a kiss. Later on, the Shadow Angels appear yet...
Regisserat av:

4
Barefoot Soldiers 2005-04-25
Barefoot Soldiers
2005-04-25
At a meeting of Shadow Angels, Toma reveals his plan of creating a new world with the help of the Solar Wing. Elsewhere, at the Element school, the Elements do an exercise which includes being barefoot. Later on, when a gravity-canceling Shadow Angel attack, their exercise proves to be very helpful.
Regisserat av:

5
King of the Underground Labyrinth 2005-05-02
King of the...
2005-05-02
Apollo wants to search for Baron, and goes missing trying to look for the Vectors. This leads the Commander to initiate a special exercise for the other Elements: Find Apollo. What they doesnt know is that the exercise has a special meaning, which is to work together as a team. When Shadow Angels...
Regisserat av:

6
To the Other Side of Emotions 2005-05-09
To the Other Side...
2005-05-09
The Elements are doing the Image Power long-range projection exercise. In this exercise, theyre going to make their partner, who will be 1 000 meters away, turn around with their Image Power. However, all of them fail blatantly. Aside that, Sirius and Raika is developing a closer relationship,...
Regisserat av:

7
Knight of the Crimson Rose 2005-05-16
Knight of the...
2005-05-16
After a small accident, tension arise between Sirius and Apollo. Later on, a Mythological Beast attacks Memphis, and Sirius, Silvia and Sirius head out to counterattack. However, it sends out a bright light which causes each of them to experience short, painful flashbacks. When they then try to...
Regisserat av:

8
The First Union 2005-05-23
The First Union
2005-05-23
Jun and Tsugumi are both worried about their first unification, and ask Pierre and Reika respectively about it. Tsugumi however, is very hesitating when it comes to going on a mission because of her powers. Later, when a new kind of Kelbim soldier appears, Jun, Apollo and Pierre are sent out to...
Regisserat av:

10
Stars in the Sky, Flowers on the Earth 2005-06-06
Stars in the Sky,...
2005-06-06
Ignoring orders, Apollo the lead and unites. The prototype wing, the new model cherubim soldier who inspired life, appears. The game wing both wings ([moroha]) you board in the cherubim soldier, the power is unfathomed. Apollo the hand or the foot does not come out in the attack whose both wings...
Regisserat av: