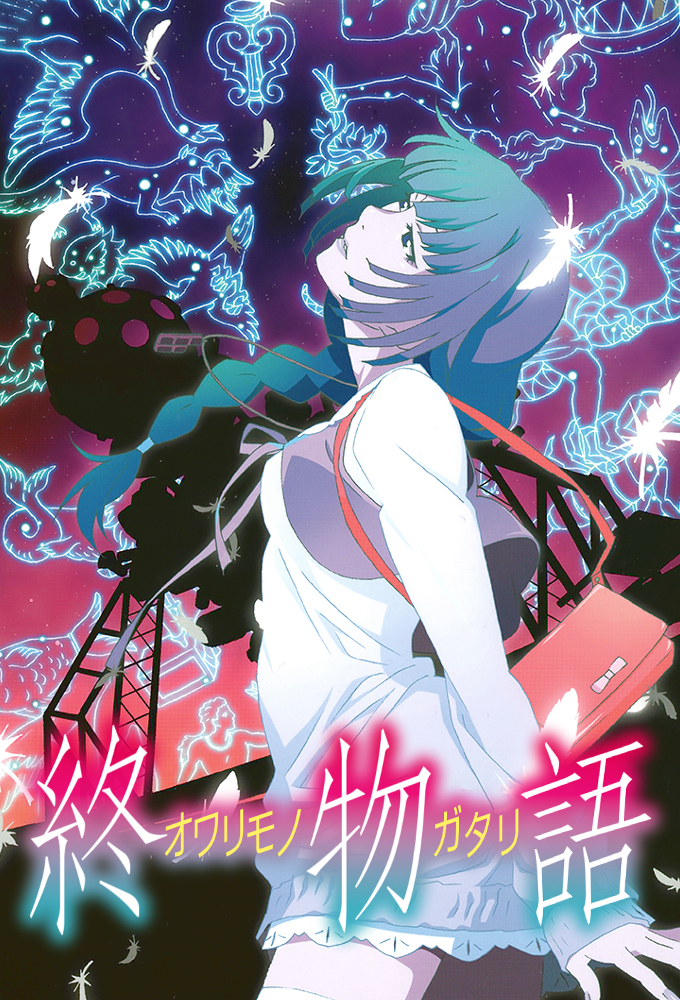 (2009)
Originaltitel: Bakemonogatari
Release: 2009-07-03
TV-bolag: Tokyo MX
Längd per avsnitt: 25 min min
Status: AVSLUTAD
Araragi Koyomi is a third year high school student who is almost human again after having briefly become a vampire. One day, a classmate named Senjougahara Hitagi, who infamously never talks to anyone, falls down the stairs into Koyomi's arms. He discovers that Hitagi weighs next to nothing, in defiance of physics and common sense alike. Despite being threatened by her, Koyomi offers her help, and introduces her to Oshino Meme, a middle-aged homeless man who helped him stop being a... (TheTVDB)
Animerat Komedi Fantasy

SPECIAL
1
2
3
4
5
SÄSONG 1

1
Hitagi Crab - Part 1 2009-07-03
Hitagi Crab - Part 1
2009-07-03
After Koyomi Araragi catches his classmate, Hitagi Senjougahara, when she fell down some stairs, he makes a strange discovery about her. Trying to keep her secret Hitagi attacks Koyomi. However, he has a secret of his own and might be able to help her.

3
Mayoi Snail - Part 1 2009-07-17
Mayoi Snail - Part 1
2009-07-17
Koyomi Araragi has an argument with his sister and then finds it difficult to stay in the house. He goes to the park where he meets Hitagi Senjyogahara. They see a little girl, Mayoi Hachikuji, comparing the town map displayed in the park to the memo in her hand. Learning that Mayoi has lost her...

9
Nadeko Snake - Part 1 2009-09-04
Nadeko Snake - Part...
2009-09-04
Koyomi and Suruga travel to an abandoned shrine in order to perform a favor for Oshino. As they climb the mountain the shrine is located on, they pass a girl running down the path, who only briefly exchanges glances before continuing in the other direction. Once they reach the shrine, Koyomi and...

10
Nadeko Snake - Part 2 2009-09-11
Nadeko Snake - Part...
2009-09-11
Oshino informs Koyomi that Nadeko is under the effects of a Snake Constrictor, a snake spirit that slowly constricts the life out of its victim. Nadeko explains that it is a curse a classmate placed on her after Nadeko inadvertently rejected the confession of a boy the classmate liked. Normally, a...

13
Tsubasa Cat - Part 3 2009-11-02
Tsubasa Cat - Part 3
2009-11-02
On the way to school, Koyomi finds Hachikuji in the middle of the street and assaults her in a teasing manner. Hachikuji panics and breaks his finger. Later after they calm down, Hachikuji tells Koyomi that she saw Shinobu at the donut store. Koyomi goes to the school bike rack and gets a text from...

14
Tsubasa Cat - Part 4 2010-02-23
Tsubasa Cat - Part 4
2010-02-23
After supressing the bakeneko, Oshino explains Hanekawas situation to Araragi. Araragi realizes that he may need Shinobus powers to help him bottle up the oddity. The problem escalates when Araragi learns that Shinobu has gone missing. Enlisting the help of his friends, he starts looking for...