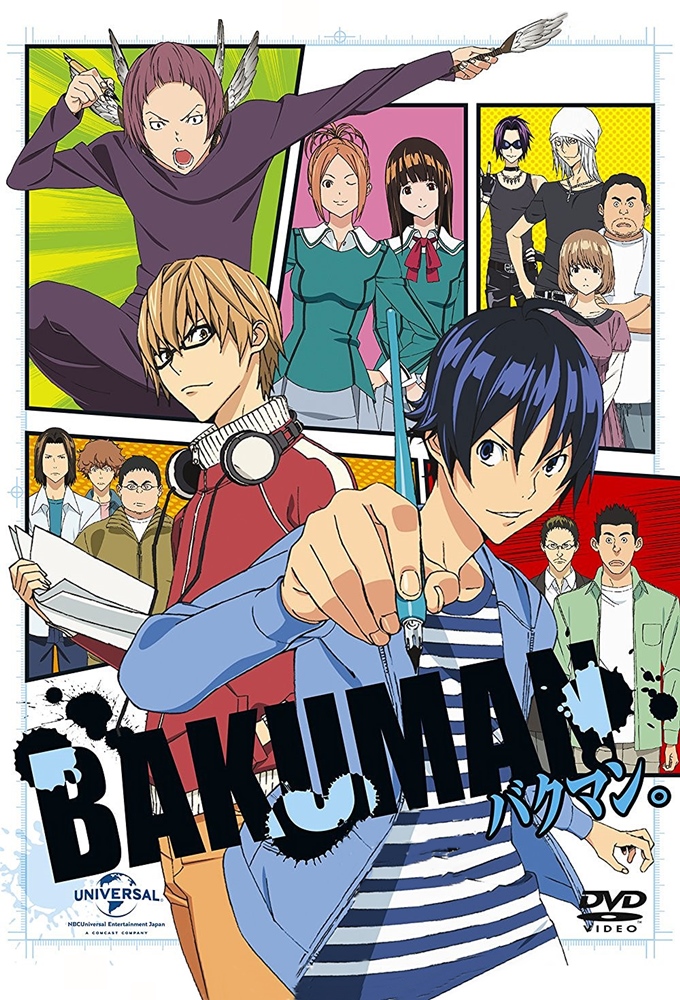 1
2
3
SÄSONG 1

1
Dreams and Reality 2010-10-02
Dreams and Reality
2010-10-02
Moritaka Mashiro, an average student with a talent for drawing, forgets his notebook at school, where his classmate Akito Takagi finds and looks through it. Takagi likes his drawings and asks Mashiro to team up with him to create a best-selling manga. Mashiro refuses because his uncle was a manga...
Regisserat av:

2
Idiots and Geniuses 2010-10-09
Idiots and Geniuses
2010-10-09
Mashiro chats with Takagi, who tells him that he chose Mashiro because he is smarter than many of his peers in matters outside of scholarship, and that he believes Azuki has a similar kind of intelligence, with the ability to be appealling to others. Mashiro tells Takagi that he believes his uncle...
Regisserat av:

3
Parents and Children 2010-10-16
Parents and Children
2010-10-16
Mashiro and Takagi arrive at Mashiros uncles apartment, where they look around and Mashiro shows Takagi the manuscripts and storyboards, that the author of a manga series produces before drawing it. Mashiro realizes that his uncle was working extremely hard until his death and vows to approach it...
Regisserat av:

4
Time and Keys 2010-10-23
Time and Keys
2010-10-23
Mashiro shows Takagi all that he has drawn and points out all the mistakes he has made, as well as the finer points of using tools for drawing manga. When Takagi questions him, Mashiro tells him about G-Pens and Kabura pens, making manuscripts, and Taro Kawaguchis three rules to a successful manga:...
Regisserat av:

5
Summer and Names 2010-10-30
Summer and Names
2010-10-30
Recalling when he and Azuki turned back to look at each other at the same time, Mashiro tells Takagi that he and Azuki have been on the same frequency for years, indicating that they are connected without having to say anything about it. Azukis best friend Kaya Miyoshi goes to Takagi to complain...
Regisserat av:

6
Carrot and Stick 2010-11-06
Carrot and Stick
2010-11-06
Mashiro and Takagi meet with Akira Hattori, one of the editors at Shonen Jack. He notes that their work has flaws, as it is too text-driven and not drawn in manga style, but they have potential. He tells them that they are better suited to figuring out what could be a hit and drawing that, rather...
Regisserat av:

7
Tears and Tears 2010-11-13
Tears and Tears
2010-11-13
After meeting with Hattori, Mashiro and Takagi continue working on new submissions, and Mashiro writes notes to Azuki in class. Azuki cries after Mashiro asks her if they have to wait to be together until they have fulfilled their dreams, and she gives him her email. Mashiro is anxious to submit a...

8
Uncertainties and Expectations 2010-11-20
Uncertainties and...
2010-11-20
Takagi comes up with some more ideas, including One Hundred Millionth, a story about people being ranked according to their abilities, and Hattori is impressed with the story, causing Mashiro to wonder if his art is good enough. The story is chosen as one of the finalists, but does not make it to...
Regisserat av:

9
Regrets and Understandings 2010-11-27
Regrets and...
2010-11-27
Takagi is suspended for a week after punching Ishizawa, causing Mashiro to worry about him. He goes over to visit Takagi and learns that the story ideas he submitted to him were only a few of the ones he came up with. Mashiro then learns that Miyoshi and Aiko Iwase, the second best student in his...

10
10 and 2 2010-12-04
10 and 2
2010-12-04
Mashiro and Takagi meet with Hattori, who says the manga artists liked their work, but the editors judging it thought it would never be published. Mashiro, wanting to progress faster than he is now, wonders if he could submit a work for serialization, and Hattori is doubtful. The editor in chief...

12
Feast And Graduation 2010-12-18
Feast And Graduation
2010-12-18
After celebrating by eating out, Hattori, Takagi and Mashiro discuss Money and Intelligence, and what changes they need to make to it. Hattori says that they should wait until graduating from high school to go for serialization, and that even Nizuma is going for it too early. Miyoshi tells Takagi...

13
Early Results and the Real Deal 2010-12-25
Early Results and...
2010-12-25
Mashiro, at Miyoshis suggestion, sends an email to Azuki to begin correspondence with her. During the first day of high school, Mashiro and Takagi submit their new pseudonym, Muto Ashirogi. Hattori is impressed with their work, but Mashiro notices that he is not expecting Money and Intelligence to...

15
Debut and Hectic 2011-01-15
Debut and Hectic
2011-01-15
Hattori goes over the weaknesses of Mashiro and Takagis storyboard, and tells them that they need good characters, simple yet exciting battles, cute heroines, and tragedy and humor to make a good storyboard. Nizuma admits that he wrote the name on the spot, rather than having it in his head, and...

16
Wall and Kiss 2011-01-22
Wall and Kiss
2011-01-22
Mashiro and Takagi, incorporating Hattoris suggestions, comes up with a concept for a story about an angel fighting other angels who kill humans to advance themselves, but are frustrated at their lack of progress. The name is rejected, but the feedback notes that they have promise. Around this...

17
Braggart and Kindness 2011-01-29
Braggart and...
2011-01-29
Mashiro starts work as an assistant for Nizuma, and meets the other two assistants; Shinta Fukuda, who had placed lower than he did in NEXT, and Takurō Nakai, who won an award 10 years ago, but has been unable to accomplish anything noteworthy since then. Despite Fukuda and Nizuma questioning why...

18
Jealousy and Love 2011-02-05
Jealousy and Love
2011-02-05
While reworking Chapter 5, Fukuda reveals that he is dissatisfied with many aspects of Jack, particularly how series are ordered by their popularity, but Yujiro tells him to get serialized before he talks about changing Jack. Nizuma tells Mashiro that he has been drawing since he was young, when...

19
Two and One 2011-02-12
Two and One
2011-02-12
Summer ends without Mashiro hearing back from Takagi, and Takagi returns the key to Mashiros uncles apartment, apologizing for failing to come up with a name in time but resolving to become a manga writer. Mashiro meets with Hattori, who is impressed with his idea of a detective who cons criminals...

20
Cooperation and Conditions 2011-02-19
Cooperation and...
2011-02-19
Mashiro and Takagi discuss how to improve the concept behind the story, now known as Detective Trap, and Takagi begins looking over many detective stories that Hattori sent him. The two meet with Hattori, insisting on proceeding with Detective Trap while still in high school, and Hattori tells them...

21
Literature and Music 2011-02-26
Literature and Music
2011-02-26
Mashiro and Takagi continue submitting a story every two weeks, with Mashiro sacrificing sleep to do so, but they have several weeks to go. They see Nakai with Ko Aoki, the runner-up of the Story King competition. Nakai reveals that hes entering- with her, and that Fukudas entry is expected to...

22
Solidarity and Breakdown 2011-03-05
Solidarity and...
2011-03-05
Team Fukuda reaches the editorial offices, but despite their protests, the editors do not believe Koogys advantage is unfair or his tactics are unethical, and Mashiro decides to defeat him by making a better manga. Fukuda then proposes that the authors check each others names, and they are...

23
Tuesday and Friday 2011-03-19
Tuesday and Friday
2011-03-19
Mashiro and Takagi both decide to rewrite their manga. Fukuda, Aoki and Nakai also rewrite their manga. Later Fukudas manga is shown first with positive reviews. Next Mashiro and Takagis manga is also shown with good reviews. Nakai panics and thinks that when Nizuma said that the winners were tied...