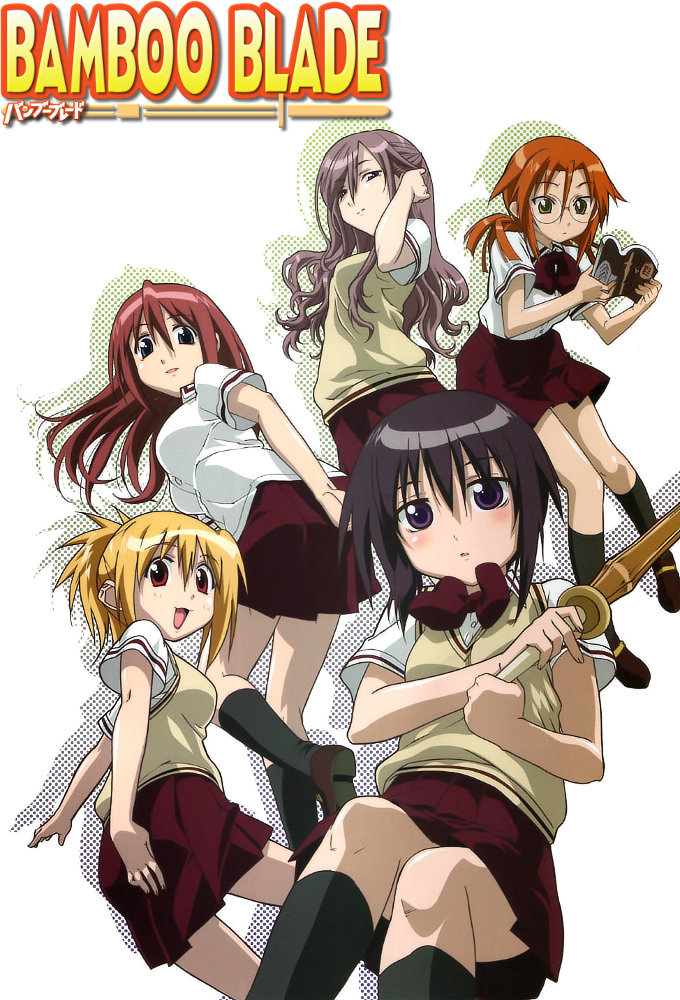 (2007)
Originaltitel: Banbû brêdo
Release: 2007-10-02
TV-bolag: TV Tokyo
Längd per avsnitt: 25 min min
Status: AVSLUTAD
Based on a seinen manga by Totsuka Masahiro, illustrated by Igarashi Aguri and serialised in Young Gangan. Kojirou is the kendo instructor at Muroe High School. He is totally broke. He has agreed to send his team to a competition against his senpai`s team. If his all female team can win the competition, he will have free meals for a year! But, the problem is that Kojirou seems unable to find five, gifted girls to form the "dream team" -- and time is running out... (TheTVDB)
Animerat Komedi Sport

1
SÄSONG 1

1
The Broom and Ally of Justice 2007-10-02
The Broom and Ally...
2007-10-02
Kojirō, the coach of Muroe Highs kendo club, makes a bet with his senpai, Kenzaburō, on a practice match between both schools, but the fighters must be 5 girls, no boys. Kojirōs victory would mean he could eat all he wants at Kenzaburōs fathers sushi restaurant for a full year. Kojirō...
Regisserat av:

2
Blade Braver and Lunch 2007-10-09
Blade Braver and...
2007-10-09
Tamakis motivation is presented in the form of her favorite tokusatsu, Blade Braver, and feels happy when toraji nicknames her Red, the leader of the Clubs female team. Her relationship with the other club members develop when they start having lunch together and sharing their bento, her everyday...
Regisserat av:

3
Black and Blue 2007-10-16
Black and Blue
2007-10-16
The 4th female member of the Kendo Club, Sayako Kuwahara, nicknamed by Toraji as the teams Blue, is revealed, and has a painful first encounter with Miyakos Black personality. (note: the encounter between Saya and Miya-miya is different in the anime from the manga.)
Regisserat av:

4
Pink and Blue 2007-10-23
Pink and Blue
2007-10-23
Miyako learns that the girl she had thrown in the lake the previous day was actually her senpai in the club, this leads her, in her Pink personality, to awkwardly try to hide her identity from Sayako to avoid any confrontations. She starts to enjoy more of the clubs activities, even though being...
Regisserat av:

5
Muroe High and Machido High 2007-10-30
Muroe High and...
2007-10-30
The day of the match arrives, however, due to the unique personalities of its members, the Machido High Kendo Club is awfully delayed. The real match starts very late in the episode, and the episode ends with Machido Highs members awed by Tamakis ability, after scoring a point in the first battle.
Regisserat av:

6
Kawazoe Tamaki and the Belated Bureiba 2007-11-06
Kawazoe Tamaki and...
2007-11-06
After Tamakis match, which ended in a victory for her, the other matches take place meanwhile she prepares to participate in the last match too. At the end, Muroe High School ends winning 3 wins to 1 loss and 1 tie. Therefore, Kenzaburo challenges Tamaki to a match, impressed of how a girl of her...
Regisserat av:

7
Sushi and Fried Katsu 2007-11-13
Sushi and Fried...
2007-11-13
This episode picks up at the end of the previous one, starting with Kenzaburo revealing that he knew the fifth fighter (Bureiba) was actually Tamaki. His challenge to Tamaki is accepted and so Kenzaburo and Tamakis match starts. Kenzaburo goes all out on Tamaki, and they both score a point, but in...
Regisserat av:

8
Tama-chan and Her Part-time Job 2007-11-20
Tama-chan and Her...
2007-11-20
Tamaki sees an anime package on TV that she wants, but later finds out that she does not have enough money for it. At the schools dojo, Tamaki overhears Miyako on the phone talking about how she could not work part-time that day. Tamaki approaches her and inquires about it. Miyako then asks Tamaki...
Regisserat av:

9
Kojirou and His Circumstances 2007-11-27
Kojirou and His...
2007-11-27
Kōjiro has an incident in a public setting that places his teaching prospects at Muroe High School in doubt. With the rest of the club he resolves to get to the Nationals (or some similar honour) in an attempt to improve the club, gain distinction and save his teaching position. A weary Tamaki...
Regisserat av:

10
The Melancholy of Miyazaki Miyako and... 2007-12-04
The Melancholy of...
2007-12-04
The team enters the high school tournament. Only Tama-chan did well enough to win. Miyako meets her middle school classmate, Otajima Reimi who has a crush on her. Miyako as such became troubled and couldnt concentrate on her match. It was revealed that Reimi used to harass Miyako when they were in...
Regisserat av:

11
Animation and Dreams 2007-12-11
Animation and Dreams
2007-12-11
Miyako reveals to the other kendo members that Reimi has been harassing her because during middle school she refused to go out with the captain of the mens football team, whom Reimi had already been rejected by. Try as she might, Kirino is unable to remember the name of the potential fifth female...
Regisserat av:

12
Azuma's Circumstances and Mei's... 2007-12-18
Azuma's...
2007-12-18
This episode dedicates to Mei from Seimei high and Azuma from Muroe High. Mei joined Seimei Highs Kendo club to get along with her friends, but many of her friends quit the club as they couldnt take the senseis strict training. They gear up for the practice match with Muroe High, she had set her...
Regisserat av:

13
Teachers and Pupils 2007-12-25
Teachers and Pupils
2007-12-25
Muroe High School Kendo team won all their matches against Seimei high in the practice match. Azuma upon seeing Tamas Strong kendo skills become motivated and took part in the practice match. Before that, Tama had a match with Azuma, despite Azuma losing, she was impressed and therefore became...
Regisserat av:

14
Satorin's Determination and Mogyumogyu 2008-01-08
Satorin's...
2008-01-08
Kirino and Sayako continue their attempts to persuade Azuma to join the kendo club. Their attempts end only in tears. As they run through and around the school, Miyako hears their mobile lamentation and springs into action. She offers an excuse that she has cleaning duties, then sweetly dumps said...
Regisserat av:

15
First Training Camp and First Bath House 2008-01-15
First Training Camp...
2008-01-15
Its training camp at Muroe High, jointly with the five Machido students that they had a practice match with. Tamas father sneaks around worried about the boys while the group cleans up the pool, fights over who gets to train with Tama, and takes a break at the Bath House. After that, they have to...
Regisserat av:

16
Kirino's Absence and the Preliminary... 2008-01-22
Kirino's Absence...
2008-01-22
Kirino is worried by home troubles while the rest of the team worries about her. Saya, sharing a deep connection with Kirino, is prepared to step up for the win and ease Kirinos burden. Despite these troubles, however, Kirino seems even more focused than ever. Meanwhile, Tama is pulled into a...
Regisserat av:

17
Light and Shadow 2008-01-29
Light and Shadow
2008-01-29
The tournament continues, with Tama seemingly in trouble with the other teams treacherous plots. Satorin (Azuma) encounters a little bit of stomach troubles while Miya-miya is continuously haunted by Reimis face. Saya does her duty to relieve Kirinos burden, and Kirino does her part as the teams...
Regisserat av:

18
The Tournament and the Subsequent Muroe... 2008-02-05
The Tournament and...
2008-02-05
Kōjiro and Tama have a little talk and wounds are tended to. Kirino must stand up in order for the team to keep fighting. The tournament ends and the team is back to base as usual, with Saya off somewhere and Tama alright.
Regisserat av:

19
Armadillo and Pangolin 2008-02-12
Armadillo and...
2008-02-12
Miya-miya and Dan-kun shops for a new Shinai at the Kendo store. There they meet Carrie, an expatriate living in Japan, who falls in love with Dan-kun at first sight. Miya-miya challenges Carrie to a duel.
Regisserat av:

21
Kawazoe Tamaki and Suzuki Rin 2008-02-26
Kawazoe Tamaki and...
2008-02-26
Rin and Tama along with the production crew go on location to film the new Blade Braver movie, where an incident gets both of them the replacement roles in the new film. The rest of the Kendo club members either practice or take the day off doing what they want. The episode concludes with Kōjiro...
Regisserat av:

23
Lie and Silence 2008-03-11
Lie and Silence
2008-03-11
The principal of the school tells Kōjiro that the kendo club will be disbanded because of club members engaging in suspicious or risky activities—specifically, Toyama and Iwasa, who, ironically, have stopped attending kendo club but have not turned in any resignation forms. Kirino and Sayako are...
Regisserat av:

24
Sword and Way 2008-03-18
Sword and Way
2008-03-18
Kirino attempts and fails to prevent Tamaki from resigning from the kendo club, the latter already having decided to give up. Neither she nor Miyako decide to attend kendo club, and nobody knows Miyakos whereabouts. Eventually even Kirino decides not to attend, and the only members left are Satori,...
Regisserat av:

25
Kendo and The Gathering 2008-03-25
Kendo and The...
2008-03-25
Muroe High goes to a national kendo competition and meets with many of their former opponents. Miyako, having watched footage of her previous kendo match filmed by Reimi in an effort to improve her kendo skills, manages to beat Carrie Nishikawa, the latter of which calls the former out for a match...
Regisserat av:

26
Present and Future 2008-04-01
Present and Future
2008-04-01
It is a new year and several months have passed since the National competition. Two freshmen show up to join the club. The members one by one appear trying to convince them to join the club only to perform sideshow tricks leaving the freshmen unimpressed. The club later have a sparring match which...
Regisserat av: