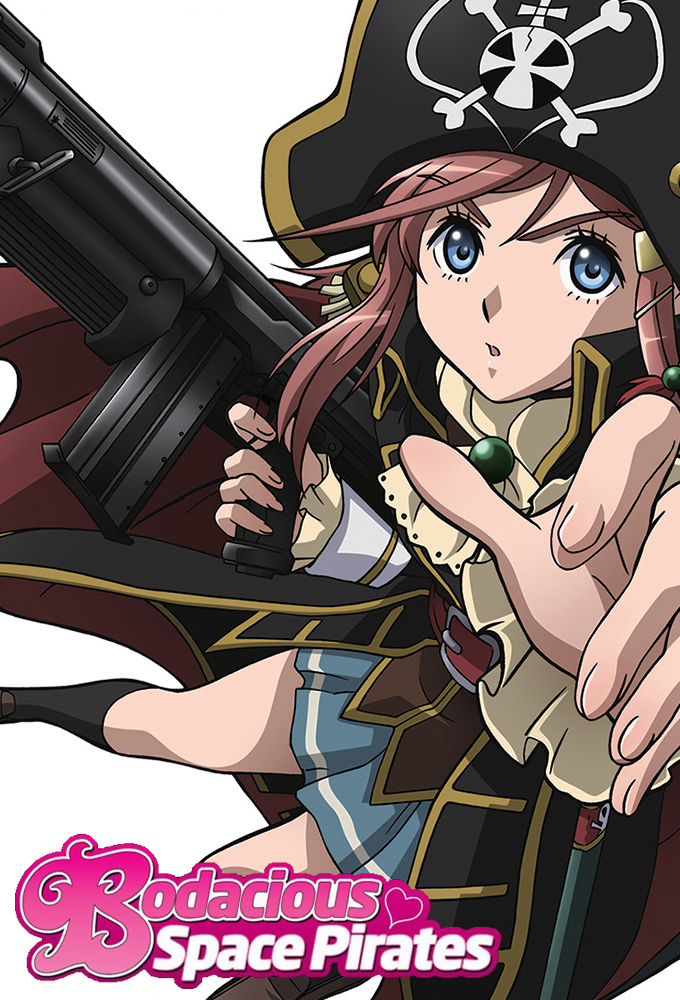 (2012)
Originaltitel: Moretsu Pirates
Release: 2012-01-07
TV-bolag: Tokyo MX
Längd per avsnitt: 25 min min
Status: AVSLUTAD
Marika is a first year high school student living in a far away galaxy known as Uminoakeboshi. One day she finds out that her recently deceased father was once the captain of the space pirate ship called the Bentenmaru. More importantly, the only one to inherit the captain's title has to be a direct descendant - meaning that Marika is next in line to become the captain of the ship! (TheTVDB)
Action Äventyr Animerat Science-Fiction

1
SÄSONG 1

1
Pirates, Coming Through 2012-01-08
Pirates, Coming...
2012-01-08
Marika Katou is a normal highschool girl, living somewhere in space. At school, she enjoys being in the yacht club, and after school she works as a waitress at the Cafe Lamp. One day, she is suddenly asked to become captain of the space pirate ship Bentenmaru.

3
The Odette II Leaves Port! 2012-01-22
The Odette II...
2012-01-22
Its time for the practice cruise, as the Odette-II takes off for a journey around the solar system. But whoever tried to hack into them earlier is still out there, and ancient ship has mechanical problems of its own...

4
The Final Battle is at Midnight 2012-01-29
The Final Battle is...
2012-01-29
The Odette II continues its voyage through the Tau Ceti system. As they near the other side of the sun, their communications are blocked by an unknown source. High-frequency radar shows the jammings coming from a ghost ship, a Colony Federation vessel that sank over 120 years ago.

7
The Peace Does Not Last 2012-02-19
The Peace Does Not...
2012-02-19
Marika is a pirate now. But this means her grades start slipping, and since she cant go too far from home, the Bentenmarus finances are in bad shape. To make up the slack, theyre forced to take a rush job, but theres more going on than meets the eye...

9
A Beautiful Launch 2012-03-04
A Beautiful Launch
2012-03-04
The Bentenmaru watches as the ship carrying the information they need is attacked by its own fleet. The princess makes the Fleet stand down, and they get the information they need. The Golden Ghost Ship they seek is plotting a dangerous course through nebulas and black holes, and theyve got no...

10
Battle in the Storm 2012-03-11
Battle in the Storm
2012-03-11
As Chiaki fills in for Morika, the crew of the Bentenmaru is continuing their search for Golden Ghost Ship in a dangerous area. But in the rough weather, they meet Serenity warships; will the Princess be able to prevent a battle?

11
Wanderer of Light 2012-03-18
Wanderer of Light
2012-03-18
The Bentenmaru is up against the mysterious Serenity Fleet, 1 ship vs. 7. With battle imminent, another space riff happens bringing the prize everyone seeks. But who will claim it first?

12
A Return From Eternity 2012-03-25
A Return From...
2012-03-25
The crew of the Bentenmaru and the soldiers of the Serenity Fleet are racing toward the treasure on the ghost ship. But the closer they get to their goal; it becomes obvious the treasure is bigger than imagined.

14
Marika Goes Recruiting 2012-04-08
Marika Goes...
2012-04-08
The crew of the Bentenmaru all get infected with a disease and placed in isolation for at least 2 weeks, except for Marika who was not on the ship at the time. Marika then has to go recruiting new crew members to fill in until they return.

17
A Surprising Client 2012-04-29
A Surprising Client
2012-04-29
For Marika, being a pirate is about taking risks, and kidnapping is something licensed pirates do not engage in. Before Marika can put her plan into action, an unidentified ship heading toward the Bentenmaru changes everything.

18
We'll Have Juice at the After Party 2012-05-06
We'll Have Juice at...
2012-05-06
Jenny is the new client of the Bentenmaru, the original plan of taking her to Space University is on hold as it will not stop the threat of her Uncle. With some inside information, the new plan is to head to Jenny’s fiancé ship to cut a deal.

23
Head For the Pirate's Nest! 2012-06-10
Head For the...
2012-06-10
Grand Cross, the pirate hunting ship that’s been causing havoc and the Parabellum, a ship registered to the Galactic Empire. What is the connection between these two ships and can anyone stop them?

24
The Wounded Benten 2012-06-17
The Wounded Benten
2012-06-17
A fight against the warship Grand Cross, a traitor within the ranks of the Bentenmaru, and Marika’s secret plans for the pirate council; It has never been a more exciting time to be a pirate, or more dangerous.