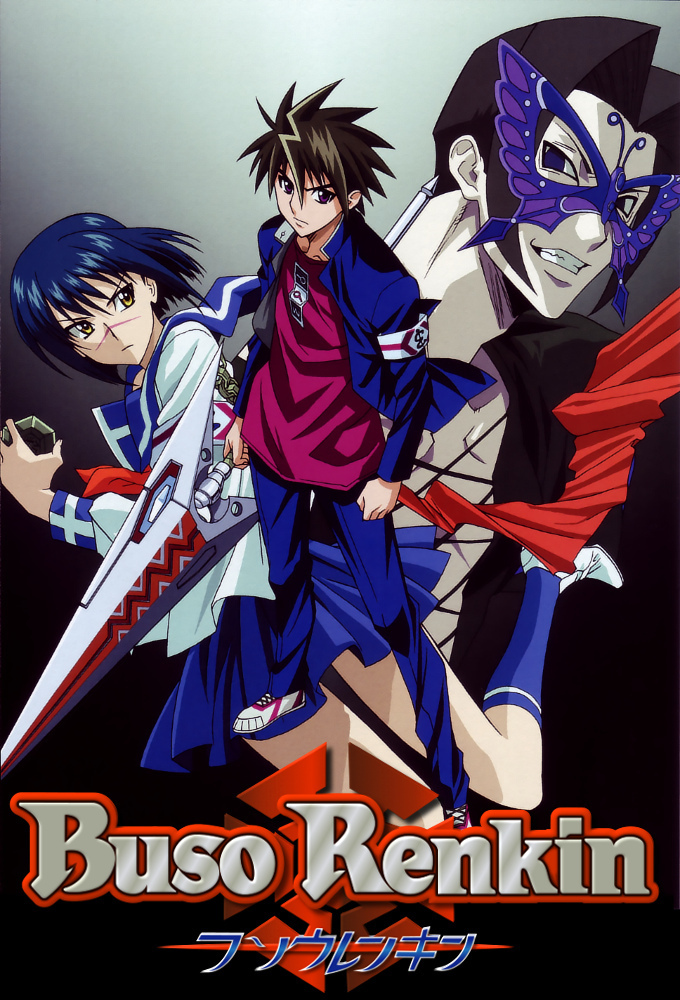 (2006)
Originaltitel: Busô renkin
Release: 2006-10-05
TV-bolag: TV Tokyo
Längd per avsnitt: 25 min min
Status: AVSLUTAD
Based on a shounen manga by Watsuki Nobuhiro (creator of Rurouni Kenshin), serialized in Shounen Jump. The story begins when high school student Mutou Kazuki is killed one night saving a mysterious girl from a monster, only to wake up and find it was only a dream. However, he soon finds out how real that dream was when a giant serpentine monster attacks him and his sister. Tsumura Tokiko, the girl from his dream, explains that the monster is a homunculus. Kazuki had been attacked and... (TheTVDB)
Animerat

3
You Became A Little Strong 2006-10-18
You Became A Little...
2006-10-18
Muto Kazuki and Tsumura Tokiko are investigating who is behind all the homunculi appearances and hostile acts. Only with two leads: He wears a Papillion Mask and attends Kazuki’s high school. With that in mind, Kazuki and Tokiko do a thorough search of the high school–searching for more leads...
Regisserat av:

4
Another New Life 2006-10-25
Another New Life
2006-10-25
After searching hard for the Papillion Mask, they finally found him–although he was definitely not what they were expecting. He supposedly wanted to bargain with Kazuki: the antidote to the Homunculus attached to Tokiko’s body for his Busou Renkin, but Kazuki refused. With a single Kazuki...
Regisserat av:

5
For the Sake of the Person Who Must Be... 2006-11-01
For the Sake of the...
2006-11-01
Kazuki and Tokiko retreat to form a plan on how to defeat the eagle Homunculus but not all goes as planned when Tokiko receives possibly critical injuries. Hurt but not out for the count the eagle Homunculus plans to target Tokiko, but Kazuki wont hear of it and they face off in an exciting and...
Regisserat av:

7
If You Suspect Hypocrisy 2006-11-15
If You Suspect...
2006-11-15
Captain Bravo, a member of the Alchemist Warriors and the one who delivered the cure to Tokiko, offers Kazuki to join their mission on combating against the LXE, a group consisting of Human-type Homunculi based in Kazukis town. Koushaku, having been resurrected by the LXEs leader who is also his...
Regisserat av:

8
Night In the School Dormitory 2006-11-22
Night In the School...
2006-11-22
During the night, Bravo takes Kazuki out to the woods for special training while Tokiko protects the kakugane acquired from the previous battle. Later on, a Homunculus named Jinnai uses a buso renkin and takes control over the students in the dorm, ordering them to take the kakugane from Tokiko....
Regisserat av:

10
You and I have an Affinity 2006-12-06
You and I have an...
2006-12-06
The four begin to battle and Kazuki eventually inflicts a fatal wound on Shusui. Ouka uses her buso renkin and heals Shusui while at the same time receiving Shusuis wound on her own body. Due to this, Kazuki realizes they are both humans and not Homunculi and questions whether they are the enemy or...
Regisserat av:

11
Two People Separated By Death 2006-12-13
Two People...
2006-12-13
Tokiko proceeds to eliminate the twins but is stopped by Kazuki who argues that they are still human and deserve to live. Shusui inflicts a critical wound on Kazuki while he is distracted. However, Ouka uses her buso renkin and absorbs Kazukis wound damage claiming that Kazuki is someone they can...
Regisserat av:

13
Signs Of Death 2006-12-27
Signs Of Death
2006-12-27
After defeating the Homunculi, the flask Dr. Butterfly has with him activates and begins to drain energy from everyone inside the school. Papillon appears with his own buso renkin activated and challenges Dr. Butterfly to a battle, eventually coming out victorious.
Regisserat av:

14
Who are you? 2006-12-27
Who are you?
2006-12-27
Before Dr. Butterfly dies, he explains that a man named Victor is inside the flask and that he is a being far superior to humans and Homunculi. Kazuki destroys the flask and engages Victor in battle and is seemingly killed after having his kakugane destroyed. Kazuki regains his kakugane which is...
Regisserat av:

15
Existence of Middle 2007-01-10
Existence of Middle
2007-01-10
After a short battle, Victor concludes that it would take too much time to defeat Kazuki and leaves the school. After reuniting with Captain Bravo, Papillon leaves to research Victor in order to turn Kazuki back into a human being. The next day, they decide to head to the beach where Tokiko runs...
Regisserat av:

16
New Power 2007-01-17
New Power
2007-01-17
That night, Gouta calls Tokiko out and tells her that Kazuki will be killed. Captain Bravo tells Kazuki that in six weeks, Kazuki will be passively draining energy from those around him like Victor and that Bravo has been ordered to kill Kazuki before the transformation is complete. In a short...
Regisserat av:

17
When the Night Ends 2007-01-24
When the Night Ends
2007-01-24
Tokiko manages to find Kazukis body in the ocean and is able to revive him. Meanwhile, Gouta learns that a team led out by Alchemist Warrior Chief Sekima Hiwatari is sent to confirm Kazukis death. Gouta learns they plan to assassinate Tokiko and impedes their mission before escaping and...
Regisserat av:

18
Flight Journey 2007-01-31
Flight Journey
2007-01-31
Tokiko explains that a mysterious person gave her Kazukis kakugane and that person may know how to reverse the black kakuganes effect. Meanwhile, Papillon intercepts the team searching for Kazuki and engages one of its members, Genji Ikusabe in battle. Elsewhere, Shusui is recruited by the...
Regisserat av:

19
If Only You Can Protect 2007-02-07
If Only You Can...
2007-02-07
Hiwataris buso renkin separates Kazuki from Tokiko and Gouta. Papillon manages to defeat Ikusabe and learns about Kazukis whereabouts from him. Tokiko and Gouta are able to defeat the enemy, Shinobu Negoro, and resume searching for Kazuki. Elsewhere, the other group of Alchemist Warriors finds...
Regisserat av:

20
Putting in Thoughts and Power 2007-02-14
Putting in Thoughts...
2007-02-14
Kazuki runs into Captain Bravo, engages him in battle but is soon overwhelmed. Despite the information Tokiko is able to relay, Bravo tells him that after he kills Kazuki, he will kill himself to repent for his death. Kazuki, enraged that his failure will result in Bravos death, pierces Bravos buso...
Regisserat av:

21
Gone Into Flame 2007-02-21
Gone Into Flame
2007-02-21
Hiwatari engages the four in battle and Bravo is critically wounded in the process. Just before Kazuki and Hiwatari finish each other off, the Alchemist General, Shosei Sakaguchi, stops them explaining Kazukis assassination has been suspended and that the top priority for the Alchemists is the...
Regisserat av:

22
The Required Decision 2007-02-28
The Required...
2007-02-28
The Alchemist Warriors find and engage Victor in battle. Meanwhile, Kazuki, Tokiko, Gouta, and Papillon arrive at the school and meet a mysterious figure who introduces herself as Victoria and leads them to her brain in a vat mother, Alexandria, the creator of the black kakugane. Alexandria reveals...
Regisserat av:

23
Boy Meets Battle Girl 2007-03-07
Boy Meets Battle...
2007-03-07
Kazuki and Tokiko spend time with their friends at the amusement park. After much thought, Kazuki decides what he will do with the white kakugane. Meanwhile, the battle between the Alchemist Warriors and Victor continues.
Regisserat av:

25
Substitute Is Not Required 2007-03-21
Substitute Is Not...
2007-03-21
Kazuki had sacrificed himself to save the world and left Tokiko in tears. Life continues–Captain Bravo relays the news of Kazuki to his friends as Tokiko is hospitalized, Chouno is left reminescing in Kazuki’s memory. Tokiko goes through a series of thinking and rethinking (in her own way) and...
Regisserat av:

26
Period 2007-03-28
Period
2007-03-28
Tokiko attacks Papillion in an attempt to settle the debt Kazuki made with him. Papillion makes no move until she threatens the large flask behind, which contains something he wishes not to be destroyed. Tokiko, thinking its his weapon to destroy the world, manages to crack the flask open only to...
Regisserat av: