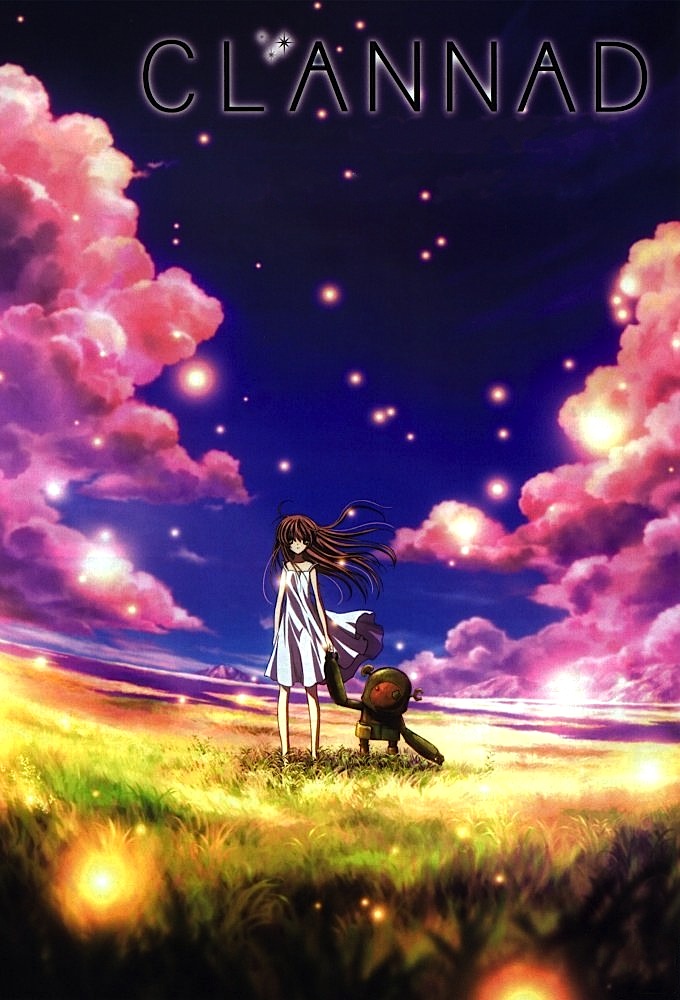 (2007)
Originaltitel: Clannad
Release: 2007-10-04
TV-bolag: Tokyo Broadcasting System
Längd per avsnitt: 25 min min
Status: AVSLUTAD
Tomoya Okazaki is a third year high school student resentful of his life. His mother passed away from a car accident when he was younger, causing his father to resort to alcohol and cigarettes. This results in fights between the two until Tomoyas shoulder is injured in a fight. Since then, Tomoya has had distant relationships with his father, causing him to become a delinquent over time. While on a walk to school, he meets a strange girl named Nagisa Furukawa who is a year older, but... (TheTVDB)
Animerat Drama Fantasy Kärlek

SPECIAL
1
2
SÄSONG 1

1
Cherry Blossoms Dancing On the Hill 2007-10-04
Cherry Blossoms...
2007-10-04
On the way to school one day, Tomoya Okazaki meets a strange girl talking to herself named Nagisa Furukawa. Later in the day, Tomoya has a conversation with Nagisa during lunch and learns that she is repeating her last year of high school, and wants to join the now-disbanded drama club. After...
Regisserat av:

2
The First Step 2007-10-11
The First Step
2007-10-11
Nagisa admits to wanting to restart the drama club, and Tomoya helps Nagisa to create advertisement posters which they place around school. At school that day, Tomoya meets two other girls: a strange genius named Kotomi Ichinose, and a first-year named Fuko Ibuki. Later that day, Nagisa finds out...
Regisserat av:

3
Once Again After Crying 2007-10-18
Once Again After...
2007-10-18
After the previous nights events, Tomoya goes to see if Nagisa is okay, and finds out that she has been physically weak all her life. While walking back from the bakery, Tomoya helps get a strange electrician out of a jam and he gives Tomoya his card, finding his name to be Yusuke Yoshino; Youhei...
Regisserat av:

4
Lets Find Friends 2007-10-25
Lets Find Friends
2007-10-25
Tomoya runs into Fuko again at school, and she tries to invite him to her older sisters upcoming marriage ceremony, but Tomoya is not interested. Tomoya gets Youhei to help reform the drama club by bribing him with bread from Nagisas family bakery. Nagisa tries to get the help of Ryou and Kyou in...
Regisserat av:

5
The Scenery with a Carving 2007-11-01
The Scenery with a...
2007-11-01
In order to help Fuko out, Tomoya and Nagisa take her to stay at Nagisas house for the time being. Nagisas family helps with carving more starfish out of wood, and at school Tomoya and Nagisa help with passing them out to students. Later, Fuko talks about how she has wanted to attend classes, but...
Regisserat av:

6
The Older and Younger Sisters Founders... 2007-11-08
The Older and...
2007-11-08
Tomoya and Nagisa invite Fukos older sister Kouko to the Founders Festival. In the meantime, Fuko hands out more carved starfish to students at the festival, and her fan club helps spread the word about Koukos wedding too. Nagisa and Tomoya meet Tomoyo, who is wearing a bear suit to find people who...
Regisserat av:

7
Star-Shaped Feelings 2007-11-15
Star-Shaped Feelings
2007-11-15
Tomoya and Nagisa convince Kouko that Fuko would wish for her to get married despite Fukos condition. They talk to the schools administration after finding out Kouko would like to get married on the school grounds. Kouko informs them that Fukos condition has gotten worse, and she may not awaken...
Regisserat av:

8
The Wind that Vanishes into Dusk 2007-11-22
The Wind that...
2007-11-22
More people from school are not able to see Fuko anymore and now even those close to Fuko in the past are beginning to forget about her. First Youhei forget after he goes to see her in the hospital, followed by Kyou and Ryou. Tomoyo manages to remember with Tomoyas help however. Later, Youhei...
Regisserat av:

9
Until the End of the Dream 2007-11-29
Until the End of...
2007-11-29
Tomoya, Nagisa, and Fuko spend the night at school having a pre-celebration for Youkos wedding. In the morning, Tomoya and Nagisa have forgotten about Fuko and cannot see her. Both Tomoya and Nagisa later feel that there is something important that they are forgetting, and finally remember about...
Regisserat av:

10
The Girl Genius Challenge 2007-12-06
The Girl Genius...
2007-12-06
Since no new members have joined the drama club, Tomoya goes to talk with Kotomi once again about joining. Tomoya takes her around school and helps her introduce herself to people to make more friends. Tomoya takes Kyou, Ryou, and Kotomi to the drama room after school, and after a round of...
Regisserat av:

11
The After School Rhapsody 2007-12-13
The After School...
2007-12-13
Kotomi is still trying to play the violin, but has not improved at all; in short, her playing is painful to anyone listening. Kyou gets the idea to have Kotomi play at her first violin recital after school the day after tomorrow, and in the mean time Kotomi can practice. The day before the recital,...
Regisserat av:

12
The Hidden World 2007-12-20
The Hidden World
2007-12-20
Kotomi returns the violin to Rie Nishina and becomes friends with her. Kotomi changes her usual routine and starts attending her classes. Due to Kyous idea, she, Ryou, Kotomi, Nagisa, and Tomoya go out together as a group and have fun in town. While out, Fuko makes an appearance in, but no one...
Regisserat av:

13
Garden of Memories 2008-01-10
Garden of Memories
2008-01-10
Tomoya realizes that he met Kotomi as a kid, though only she had remembered. Back then, Tomoya had often visited Kotomi, and was her only friend. Around this time on Kotomis birthday, her parents left for business reasons, and later that day she finds out they were killed in a plane crash. Kotomi...
Regisserat av:

14
Theory of Everything 2008-01-17
Theory of Everything
2008-01-17
Kotomi finally leaves the house to find that Tomoya worked in the garden all night long and had fallen asleep. When she returns to school, Tomoya, Kyou, Ryou and Nagisa are all waiting for her. The mysterious stranger whom she was so frightened of, believing he wanted to steal her parents thesis,...
Regisserat av:

15
Stuck Problem 2008-01-24
Stuck Problem
2008-01-24
In order to help Nagisa reform the drama club, her friends offer their names in order to get enough members to qualify, but they still need a teacher to advice them with the club, which leads them to ask Toshio Koumura. However, he is already meant to be the adviser for the choir club, so Nagisa...
Regisserat av:

16
3 on 3 2008-01-31
3 on 3
2008-01-31
When Mei shows up, she cleans her brothers filthy room, but cannot stay at her Youheis all-boy dorm, so Nagisa offers to have her stay at her home while she is in town. Tomoya and Youhei easily get Kyou to help with the basketball game, and she gets pumped up after a comment about pairing up with...
Regisserat av:

17
Absent Space 2008-02-07
Absent Space
2008-02-07
After watching the basketball game, the choir club decides to share Koumura with the drama club, but the student council will not allow it. Nagisa collapses at school and cannot come to school for a few days. During this time, Tomoyo starts waking up Tomoya and Youhei before classes start so they...
Regisserat av:

18
The Secret Plan of Reversal 2008-02-14
The Secret Plan of...
2008-02-14
During the time that Tomoya is suspended from school, Tomoyo continues to come to his house, wake him up, and make him breakfast, though when she tries to ask him about his relationship with his father, he does not answer her. On Sunday when Tomoyo is making him lunch, Kyou, Ryou, and Kotomi arrive...
Regisserat av:

19
A New Life 2008-02-28
A New Life
2008-02-28
The drama club is finally re-established and Koumura is shared with the choir club. Tomoyas home room teacher goes to Tomoyas house to ask his father about his future, but Tomoyas father says that is something that Tomoya has to decide for himself. Seeing the strained relationship between Tomoya...
Regisserat av:

20
A Hidden Past 2008-03-06
A Hidden Past
2008-03-06
After hearing Nagisa talk about the story for the play she wants to perform, Tomoya tries asking Nagisas parents about it, but they do not know any story like that. After Akio catches Tomoya and Nagisa in the shed, he tells them to leave, and later brings Tomoya aside to tell him about what...
Regisserat av:

21
Face Toward the School Festival 2008-03-13
Face Toward the...
2008-03-13
Nagisa and her friends continue to practice for the play, such as reciting tounge twisters, choosing which music to use for the play, lighting, and stage direction. Nagisas father rents a play on video, and Nagisa finds it very touching, plus it was the first play she ever saw. Tomoya and Akio try...
Regisserat av:

22
Two Shadows 2008-03-20
Two Shadows
2008-03-20
After Nagisa finds out about her parents secret past, she cannot take her mind off how she ruined their dreams, and becomes emotional and depressed. On the day of the school festival, the whole theater club realizes that Nagisa is not herself, and try to cheer her up, but to no success. As the...
Regisserat av:

23
The Events of Summer Vacation 2008-03-27
The Events of...
2008-03-27
It is now during summer vacation, but despite now having been going out for weeks, both Tomoya and Nagisa are still very nervous about it and have not done much to progress their relationship which comes as a shock to their friends. Mei comes back for another visit and after learning of Tomoyas and...
Regisserat av: