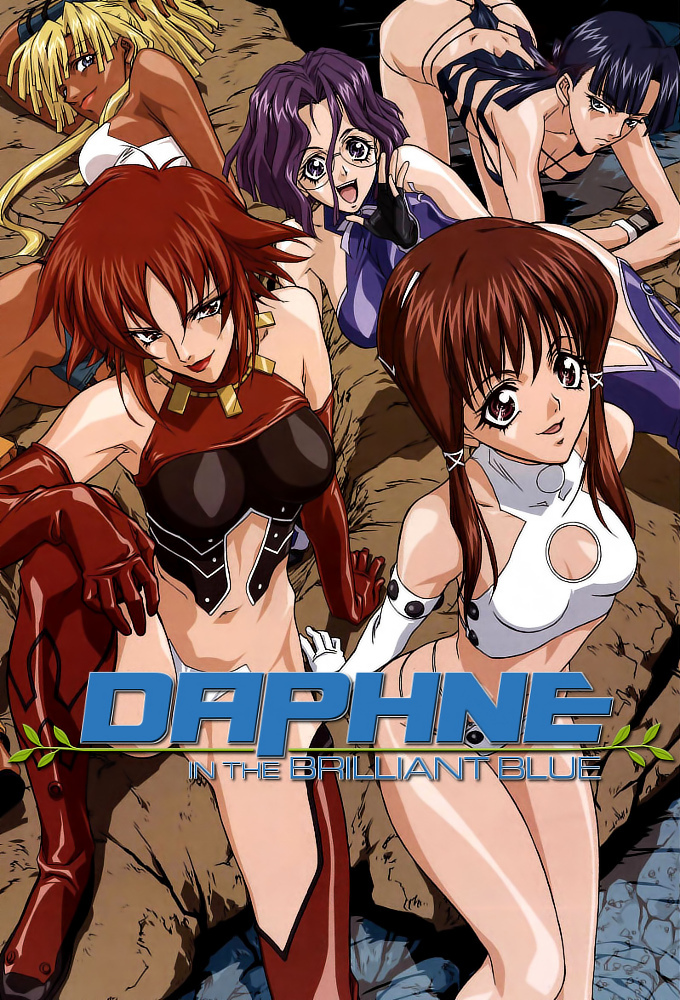 Daphne in the Brilliant Blue

(2004)
Originaltitel: Hikari to mizu no Daphne
Skapad av: Seishi Minakami
Release: 2004-01-15
TV-bolag: TV Kanagawa
Längd per avsnitt: 25 min min
Status: AVSLUTAD
In the future, water has covered much of the Earth due to the effects of global warming, leaving the human race to live on floating cities. The orphaned Maia Mizuki, 15, just graduated from middle school and has already applied for employment in the elite paramilitary Ocean Agency, part of the futuristic world government. Only the best, most intelligent, and physically fit students are eligible for admission. Maia, the series protagonist, is set to become one of the few. But her... (TheTVDB)
Animerat Komedi Science-Fiction

10
Siberian Special Vacation 2004-03-19
Siberian Special...
2004-03-19
The girls go to Siberia City where slave traders kidnap Shizuka. Maia has no recollection of being in Siberia before but knows the fastest way to intercept the fleeing kidnappers.

13
Giving Hatred 2004-04-08
Giving Hatred
2004-04-08
Wong, Chang and Lee along with their rescuer, Mai, seek revenge on Nereids for putting the three brothers in prison. Nereids confiscates the submarine Mai stole.

15
The Great Surge (1) 2004-04-30
The Great Surge (1)
2004-04-30
A grade-school boy runs away from home and Maia is sent to Siberia to find him. The branch manager in that city is holding a grudge against Rena. A mechanic is paid off to sabotage the private jet of a wealthy CEO then murdered. Terrorists take over the wave negation towers in Kamchatka.

16
The Great Surge (2) 2004-05-07
The Great Surge (2)
2004-05-07
Maia and the boy are caught in the plot to kill a wealthy CEO. Rena and Shizuka track down the people behind the plot. Maia must pilot and land an aircraft carrying 1000 passengers in the confines of a very large water holding facility.

19
Submarine 2004-05-28
Submarine
2004-05-28
Mai, Wong, Chang and Lee steal the Agnus, the name they gave the submarine, back. Maia gets taken hostage in an attempt to stop them. Plans for a less than lethal recovery by Nereids goes awry. Maia rescues the treasure hunters from a potentially watery grave.

20
Once Upon a Time in Siberia 2004-06-04
Once Upon a Time...
2004-06-04
The stress of almost certain death in her rescue of the treasure hunters triggered Maia to remember an event from her past. She goes to Siberia to look for the time capsule she and her big brother buried under a Loral Tree.

21
What Happened to Maia 2004-06-11
What Happened to...
2004-06-11
Maia is distracted by the return of her memories that lend to her poor performance on a mission to return a kidnapped girl captured by slave traders. Shizuka is seriously injured as a result of Maia’s lack of concentration.

22
Everyday Life of an Eye and Recollection 2004-06-18
Everyday Life of an...
2004-06-18
A band of slave traders captures Maia. The same traders Nereids raid ruined. Millie and Tony Long, a guy that has appeared watching Maia from the shadows many time in previous episodes, save her. As Maia recovers she dreams of her past in the city of Elpida. Tony confirms Maia is the soul survivor...

23
Escape from Kamchatka 2004-06-25
Escape from...
2004-06-25
Maia is told the reason behind her false memories. Tony tells the girls of Nereids about Maia’s capture. Shizuka, Yu and Gloria quit Nereids on account of Rena’s apparent cold-heartedness. Tsukasa returns from Greenland City and is immediately taken by Shizuka to help rescue Maia from the Ocean...

24
Daphne in the Brilliant Blue 2004-07-02
Daphne in the...
2004-07-02
Kevin forwards the coordinates of Elpida to the Yomogi-1. Tony gives Mai, Wong Chang and Lee the use of an attack sub. The Ocean Agency trails the Yomogi-1 to Elpida. While the treasure hunters chases off the Ocean Agency’s pursuit vehicle. Maia descends into the shell of the city proper. Once...