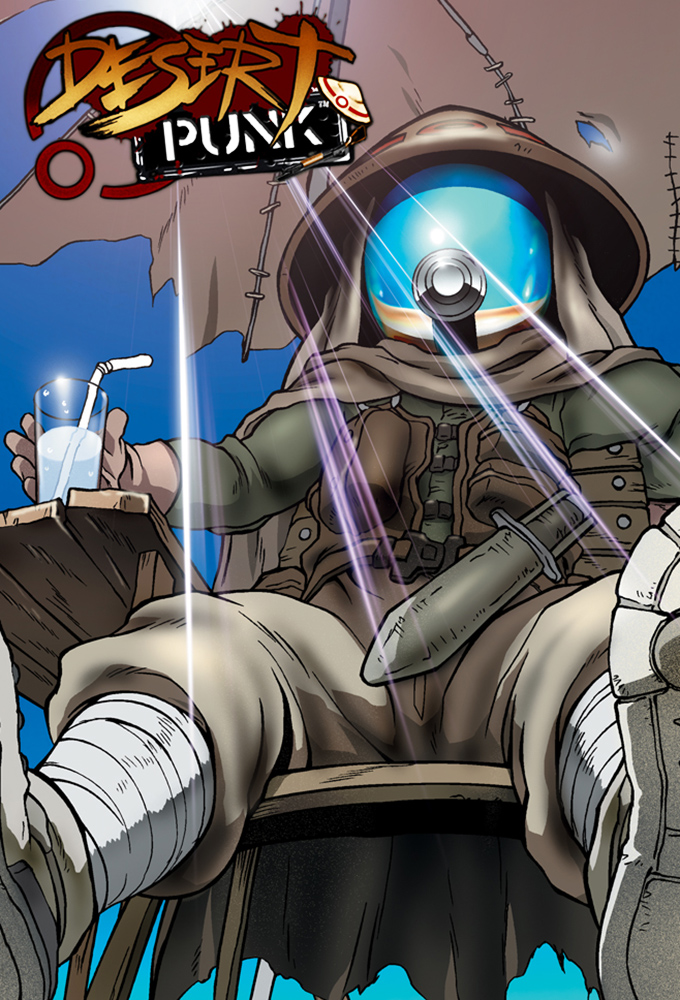 (2004)
Originaltitel: Sunabôzu
Release: 2004-10-04
TV-bolag: MBS
Längd per avsnitt: 25 min min
Status: AVSLUTAD
Sunabouzu, real name Kanta Mizuno, is a desert punk, ekeing out a living in post-apocalyptic Japan. Although he seems obsessed with large-breasted women and has a tendency to become overly fixated on the mercenary jobs given him, he is a likable character dealing with a difficult situation. (TheTVDB)
Animerat

2
Rock, Paper, Scissors 2004-10-11
Rock, Paper,...
2004-10-11
Desert Punk and Rain Spider (Amagumo) are hired by the same company to collect debt of a family of an old man and his daughter. Rain Spider wanted to sell the daughter as the old man had no assets to which Desert Punk disagreed and they pit themselves in a duel for it.

6
Wandering Lust 2004-11-09
Wandering Lust
2004-11-09
Desert Punk defeats the raiders, but is taken outside of the village while sleeping and left on his own with little food and water. He then tries to return to the village for payment but finds himself on the verge of death, only to be saved by the Machine Gun Brothers.

10
A Little Bit Of Wisdom 2004-12-07
A Little Bit Of...
2004-12-07
Desert Punk helps a treasure hunter retrieve a fortune that he lost ten years before. But a seemingly unknown creature is guarding the treasure.

11
Compromising Positions 2004-12-14
Compromising...
2004-12-14
After Junko double-crosses Desert Punk, he takes her prisoner and locks both of them inside a secret desert hide-out. Angry, Junko knocks Desert punk in the head, and now he cant remember the code to let them out.

14
Kosuna: Fully Automatic 2005-01-17
Kosuna: Fully...
2005-01-17
After Kosuna has a near-death fight with an enemy mercenary, she decides to arm herself to the teeth. But she still has a lot of training to do and an old wise arms dealer will teach her everything.

17
Perv In Pursuit 2005-02-07
Perv In Pursuit
2005-02-07
Junko runs into Desert Punk in the middle of the desert, being chased by a sniper. The sniper is wearing a state-of-the-art desert suit and seems to have a fixation on the lovely Junko.

18
Too Close For Comfort 2005-02-14
Too Close For...
2005-02-14
Tech manages to kidnap Junko, but Desert Punk is on his trail. That is until three other men appear and start shooting at all of them. Now Desert Punk must join forces with Junkos kidnapper, in order to survive.

19
Scratching The Surface 2005-02-21
Scratching The...
2005-02-21
After Junko is arrested by the government, Desert Punk teams up with the Machine Gun Brothers to find the missing Natsuki.

20
A Raw Deal 2005-02-28
A Raw Deal
2005-02-28
Desert Punk discovers that Stryker, Natsuko and many others are all part of the Underground Mercenaries, a group taht wants to overthrow the government.

24
The Demon Revealed 2005-03-28
The Demon Revealed
2005-03-28
With the thought of Kanta being dead quickly erased from her mind, Kosuna sets out to prove herself as a true mercenary one last time against her old master. Kanta reveals that Kaizuka may not be all that he seems to be, and the Underground Mercenaries are destroyed. Kosuna chooses to forget about...