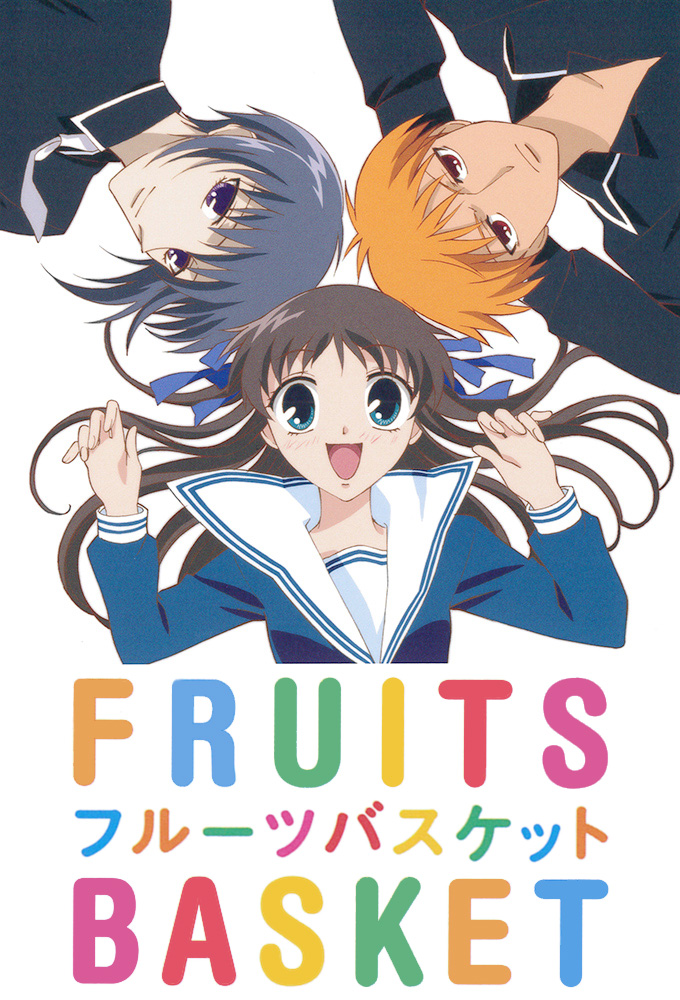 (2001)
Originaltitel: Fruits Basket
Release: 2001-07-05
TV-bolag: Fuji TV
Längd per avsnitt: 25 min min
Status: AVSLUTAD
Tohru Honda is a cheerful 16 year old girl. She was orphaned when her mother was killed in a car accident. Not wanting to burden anyone, she buys a tent and begins to live in a forest. She is determined to finish school in order to fulfill her mothers last wish. It turns out that the land Tohru is living on belongs to the Sohma family. She is quickly invited to live in the Sohma house (all males), as long as she is willing to cook and clean. One of the Sohmas, Yuki, is the most... (TheTVDB)
Animerat Komedi Drama

1
SÄSONG 1

1
The Strangest Day 2001-07-05
The Strangest Day
2001-07-05
Losing Tohru Hondas mother was hard enough, but living in a tent, now thats just crazy! One day, leaving for school, Tohru happens to stumble to the prince of her high school Yuki Sohma at his house. As Yuki and his cousin Shigure finds out that Tohru been living in a tent, Yuki and Shigure lets...
Regisserat av:

3
All Shapes and Sizes 2001-07-19
All Shapes and Sizes
2001-07-19
At school, Tohru walks in on Kyo and Yuki fighting. When she tries to stop them she runs into Kyo and he transforms. Kyo gets angry and calls her a stupid girl which makes Tohru think he hates her. Feeling guilty, he decides to pick Tohru up from her job and apologizes in his own way. The next day,...
Regisserat av:

5
A Rice Ball in a Fruits Basket 2001-08-02
A Rice Ball in a...
2001-08-02
Things are going great at Shigures house. Just when Tohru feels the days will always be like this, she gets a call from her grandpa. His house is finished, so Tohru can move back with him.
Regisserat av:

6
Invincible Friendship? 2001-08-09
Invincible...
2001-08-09
Tohru is back living with the Sohmas. Tohrus friends just get wind of it and decide to see if the Sohmas are taking good care of Tohru. Will they be able to keep the Sohma family curse under wraps while Uo and Hana stay over?
Regisserat av:

7
A Plum on the Back 2001-08-16
A Plum on the Back
2001-08-16
Its the cultural festival, and Tohrus class is doing a hit or miss rice ball stand. Yuki is given a special outfit to wear during the festival, which brings in lots of customers. We get to meet Momiji and Hatori, two more Sohma family members! Could they be members of the zodiac as well?
Regisserat av:

8
Dont Cry, For the Snow will Surely Melt 2001-08-23
Dont Cry, For the...
2001-08-23
Tohru visits the main Sohma residence for the first time. After the warning Yuki gave her at the festival, shes a bit nervous to talk to Hatori, one of the senior family members. Why is Hatori so insistent that Tohru leave the Sohma family alone?
Regisserat av:

10
Make It Clear If Its Black or White 2001-09-06
Make It Clear If...
2001-09-06
Tohrus class goes on an endurance run. In the middle of the run, a white-haired boy, not much younger than Yuki, interrupts and challenges Kyo to a fight. The boy is also a member of the Sohma clan. As they fight, Yuki feels faint. What will Tohru do now? And which zodiac member is this boy?
Regisserat av:

11
Everybody Loves Chocolate 2001-09-13
Everybody Loves...
2001-09-13
Its Valentines Day, and Tohru has given all the Sohmas chocolates. But it seems that after finals, shes also working harder than ever earning money. Could something be the matter?
Regisserat av:

12
White Day 2001-09-13
White Day
2001-09-13
Momiji invites Tohru, Kyo, and Yuki to a relaxing weekend at the Sohma Hot Springs. Tohru even brings her mom along. Yuki has a chance to give Tohru a gift for White Day. But Momiji has an even bigger surprise!
Regisserat av:

13
A New School Term Starts! 2001-09-27
A New School Term...
2001-09-27
Tohrus second year at high school begins, and Yuki is helping out with orientation. It turns out some of the younger Sohmas are entering the same high school. Hatsuharu gets in a conflict with the class president, but a deeper situation occurs when one of the Sohmas unexpectedly shows up and...
Regisserat av:

14
The Adults Episode - Yukis a Messed Up... 2001-10-04
The Adults Episode...
2001-10-04
Tohru and Yuki are tending the vegetable garden, when Tohru finds a set of clothes lying on the ground. Could this be a new Sohma? According to the title, it is! Not only is the new Sohma awfully friendly, it has a few surprising secrets to reveal about its relationship to Yuki and the others.
Regisserat av:

15
There Are No Memories Its OK to Forget 2001-10-11
There Are No...
2001-10-11
Its been a year since Tohrus mom passed away, and the gang visits her grave. Uo and Hana speculate on whom Tohru will fall in love with. Then Tohru discovers Momiji in the building she works in. What is he doing there? And where are Momijis parents?
Regisserat av:

16
If Weve Three Then We Dont Need To Fear... 2001-10-18
If Weve Three Then...
2001-10-18
Shigure invites Tohru and the Sohmas out to a lake in the woods, where not only will they have to contend with Jason, but some other surprises. Also, Tohru worries that Kyo and Yuki dont seem to be their usual selves.
Regisserat av:

17
Its Because Ive Been Loved That Ive... 2001-10-25
Its Because Ive...
2001-10-25
Hatsuharu introduces a new Sohma to Tohru. Its a tiger cub named Kisa! But when Tohru reaches out to her, Kisa bites her! Can Tohru befriend this wild yet timid girl?
Regisserat av:

18
The Strongest Tag - The Cursed Electric... 2001-11-01
The Strongest Tag -...
2001-11-01
The Prince Yuki Fan Club takes center stage in this episode, where they plot to break up the friendship between Tohru and Yuki. They use a school newspaper interview visit to Saki Hanajimas house to search for Hanas weaknesses. But even with their trusty camcorder, the fan club is in for some...
Regisserat av:

23
Is the Rumored Ri That Mothers Daughter? 2001-12-06
Is the Rumored Ri...
2001-12-06
Shigures house receives yet another visitor - Ritsu Sohma, the daughter of the Hostess at the hot springs. Whenever Ris around, it seems to be one mishap after another. But Ritsus biggest bombshell is yet to come. Tohru is in for the surprise of her life!
Regisserat av:

24
The Curse of the Cat 2001-12-13
The Curse of the Cat
2001-12-13
Its a rainy day. Tohru and Yuki dont mind much, but Kyo is in down spirits. Things just keep getting worse for Kyo. Kagura makes a surprise visit. We learn why Kagura loves Kyo so much. Kyos teacher, Kazuma Sohma, also makes a visit. Kazuma seems to have a reason for his visit, but could it...
Regisserat av:

25
True Form 2001-12-20
True Form
2001-12-20
Kyos shocking transformation into his true form is finally complete! Unfortunately for Tohru, she witnesses the entire spectacle leaving her disoriented and confused. Kagura comes up with the familys last hope to save him…whether Tohru likes it or not!
Regisserat av:

26
Lets Go Home 2001-12-27
Lets Go Home
2001-12-27
Tohru pushes her relationships with the Sohmas to the limit as she tries to reach out to Kyo in love, which proves to be troublesome since Kyo is in his wild monster cat form. And if that wasn’t enough, she confronts Akito to tell him how she feels about all the abuse. Akito isn’t pleased with...
Regisserat av: