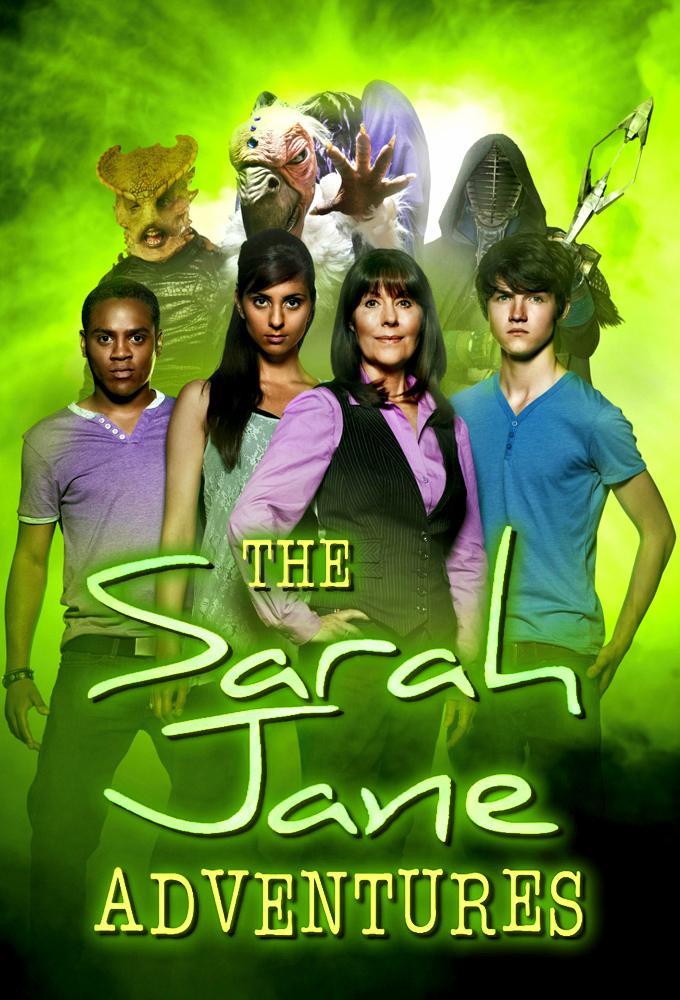 (2007)
Originaltitel: The Sarah Jane Adventures
Release: 2007-01-01
TV-bolag: CBBC
Längd per avsnitt: 30 min min
Status: AVSLUTAD
I saw amazing things, out there in space. But there is strangeness to be found wherever you turn. Life on Earth can be an adventure too... you just need to know where to look! Ms. Sarah Jane Smith is back in action, discovering alien plots to take over the world, or simply helping a lost one get home... Sarah Jane and her new friend Maria Jackson, and her newly (and genetically grown) adopted son Luke Smith have no problem taking on any challenge! (TheTVDB)
Action Äventyr Barn Science-Fiction

SPECIAL
1
2
3
4
5
SÄSONG 1

1
Revenge of the Slitheen (1) 2007-09-24
Revenge of the...
2007-09-24
Its Maria (Yasmine Paige), Luke (Tommy Knight) and Clydes (David Anthony) first day at their new school – and somethings not quite right. The food keeps going off, theres a funny smell in the air and the new technology block is hiding some dark secrets. The friends soon make a shocking discovery:...
Regisserat av:

2
Revenge of the Slitheen (2) 2007-09-24
Revenge of the...
2007-09-24
Under attack from the monstrous Slitheen child, Maria (Yasmine Paige), Luke (Tommy Knight) and Clyde (David Anthony) escape, thanks to some deodorant and Sarah Janes (Elisabeth Sladen) sonic lipstick. Back in her attic, Sarah Janes super – computer Mr Smith (Alexander Armstrong) reveals the...
Regisserat av:

3
Eye of the Gorgon (1) 2007-10-01
Eye of the Gorgon...
2007-10-01
Sarah Jane (Elisabeth Sladen) and her young friends investigate reports of a ghostly nun which is haunting the local old folks residential home. And when one of the elderly residents entrusts Luke (Tommy Knight) with a mysterious alien talisman, it becomes clear there is even more to the story than...
Regisserat av:

4
Eye of the Gorgon (2) 2007-10-08
Eye of the Gorgon...
2007-10-08
Marias dad Alan (Joseph Millson) has been turned to stone. The alien talisman is now in the possession of the Gorgon and her evil nuns, and they are preparing to open the portal to their world. Can Sarah Jane (Elisabeth Sladen) and her young friends free Alan from his stony state, prevent the nuns...
Regisserat av:

5
Warriors of Kudlak (1) 2007-10-15
Warriors of Kudlak...
2007-10-15
Sarah Jane (Elisabeth Sladen) and Maria (Yasmine Paige) investigate the mysterious disappearance of local boy Lance Metcalf, and soon discover that a number of children have gone missing across the country. Remarkably, the disappearances all occurred during freak storms and in cities that are home...
Regisserat av:

6
Warriors of Kudlak (2) 2007-10-22
Warriors of Kudlak...
2007-10-22
A Carcaroth has arrived on Earth, seeking soldiers to help fight his endless intergalactic war back home. Using Combat 3000 to sift out the best, most aggressive and instinctive fighters, he then transports them to his spaceship – awaiting transfer to the war. Clyde (David Anthony) and Luke...
Regisserat av:

7
Whatever Happened to Sarah Jane? (1) 2007-10-29
Whatever Happened...
2007-10-29
Sarah Jane (Elisabeth Sladen) mysteriously disappears – just as a huge meteor threatens to crash straight into Earth. When Maria (Yasmine Paige) wakes up one morning, its as though Sarah Jane – and Luke (Tommy Knight) – never existed. Living across the road in Sarah Janes house is a woman...
Regisserat av:

8
Whatever Happened to Sarah Jane? (2) 2007-11-05
Whatever Happened...
2007-11-05
Maria (Yasmine Paige) finds herself taken back in time by the alien Graske to a pier in 1964. There, she meets a young girl her own age called Sarah Jane Smith (Elisabeth Sladen) who, with her friend Andrea (Jane Asher), is about to embark on a fateful adventure. Taken by the Graske again, Maria is...
Regisserat av:

9
The Lost Boy (1) 2007-11-12
The Lost Boy (1)
2007-11-12
A news report on a couple looking for their missing son, Ashley, brings a surprise for Sarah Jane (Elisabeth Sladen) when she discovers that the missing boy looks exactly like Luke (Tommy Knight). And when Mr Smith (Alexander Armstrong) confirms that Luke is a genetic match with Ashley, Sarah Jane...
Regisserat av:

10
The Lost Boy (2) 2007-11-19
The Lost Boy (2)
2007-11-19
Maria (Yasmine Paige) and her dad, Alan (Joseph Millson), dig deeper into the mystery of Lukes (Tommy Knight) new parents and discover that Luke has actually been kidnapped by the Slitheen. There are more shocks when Sarah Jane (Elisabeth Sladen) and Maria find out that Mr Smith (Alexander...
Regisserat av: