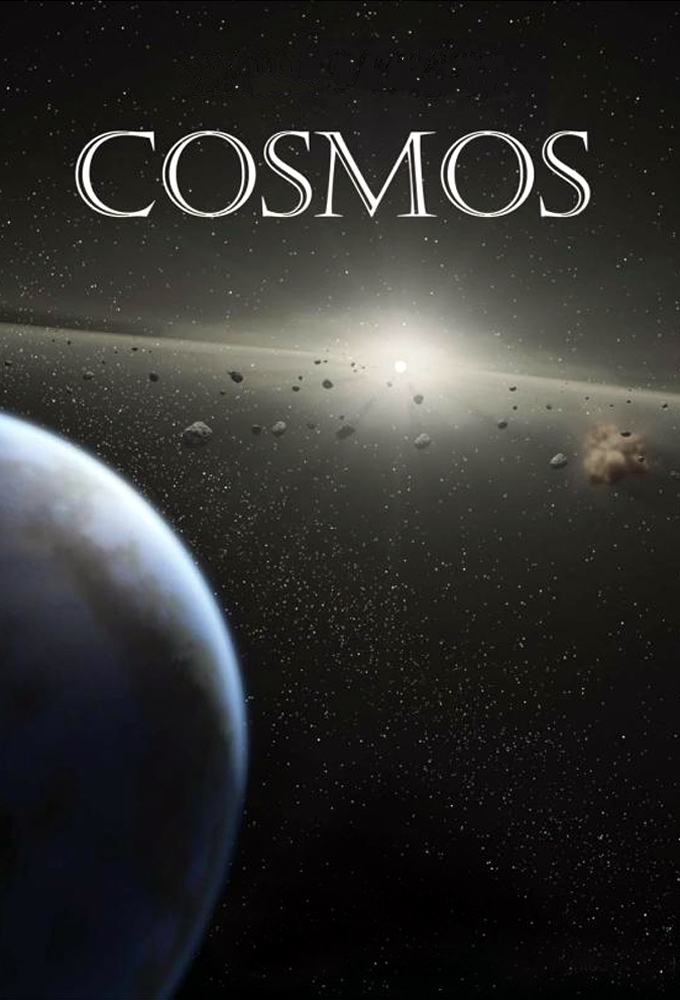 (1980)
Originaltitel: Cosmos
Release: 1980-09-28
TV-bolag: PBS
Längd per avsnitt: 60 min min
Status: AVSLUTAD
Carl Sagan brings us the Cosmos, everything that ever was and ever will be, in an approach that is easily accessible even for those of us that are not science wizards. This 13 part series covers everything from the history of astronomy, the challenges it faced at its creation, how the universe was created and how it all might end.First aired in 1980, updated segments have been added to the series to include recent discoveries and the current theories in astronomy.Winner of an Emmy... (TheTVDB)
Dokumentär

SPECIAL
1
SÄSONG 1

1
The Shores of the Cosmic Ocean 1980-09-28
The Shores of the...
1980-09-28
At the beginning of this cosmic journey across space and time, Dr. Carl Sagan takes us to the edge of the universe aboard a spaceship of the imagination. Through beautiful special effects, we witness quasars, exploding galaxies, star clusters, supernovas and pulsars. Returning to our solar system,...
Regisserat av:

2
One Voice in the Cosmic Fugue 1980-10-05
One Voice in the...
1980-10-05
Dr. Sagans cosmic calendar makes the history of the universe understandable and frames the origin of the Earth and the evolution of life. We see the evolutionary process unfold, from microbes to humans. Our understanding of how life developed on Earth enables us to venture to other worlds for...
Regisserat av:

3
Harmony of the Worlds 1980-10-12
Harmony of the...
1980-10-12
This episode is a historical re-creation of the life of Johannes Kepler, the last scientific astrologer, the first modern astronomer and the author of the first science fiction novel. Kepler provided the insight into how the moon and the planets move in their orbits and ultimately how to journey to...
Regisserat av:

4
Heaven and Hell 1980-10-19
Heaven and Hell
1980-10-19
A descent through the hellish atmosphere of Venus to explore its broiling surface serves as a warning to our world about the possible consequences of the increasing greenhouse effect. Then Dr. Sagan leads us on a tour of our solar system to see how other heavenly bodies have suffered from various...
Regisserat av:

5
Blues for a Red Planet 1980-10-26
Blues for a Red...
1980-10-26
Is there life on Mars? Dr. Sagan takes viewers on a tour of the red planet first through the eyes of science fiction authors, and then through the unblinking eyes of two Viking spacecrafts that have sent thousands of pictures of the stunning Martian landscape back to Earth since 1976. Though based...
Regisserat av:

6
Travellers Tales 1980-11-02
Travellers Tales
1980-11-02
Dr. Sagan compares the exhilaration of 17th-century Dutch explorers who ventured in sailing ships halfway around our planet in their quest for wealth and knowledge to an inside view of the excitement around Voyagers expeditions to Jupiter and Saturn. The newly acquired treasures of our present...
Regisserat av:

7
The Backbone of Night 1980-11-09
The Backbone of...
1980-11-09
Humans once thought the stars were campfires in the sky and the Milky Way the backbone of night. In this fascinating segment Dr. Sagan takes us back to ancient Greece, when the basic question what are the stars? was first asked. He visits the Brooklyn elementary school of his childhood, where this...
Regisserat av:

8
Journeys in Space and Time 1980-11-16
Journeys in Space...
1980-11-16
A voyage to see how star patterns change over millions of years is followed by a journey to the planets of other stars, and a look at the possibility of time travel. This takes us to Italy, where a young Albert Einstein first wondered what it would be like to ride on a beam of light.
Regisserat av:

9
The Lives of the Stars 1980-11-23
The Lives of the...
1980-11-23
Using computer animation and amazing astronomical art, Dr. Sagan shows how stars are born, live, die and sometimes collapse to form neutron stars or black holes. We then journey into the future to witness the last perfect day on Earth, 5 billion years from now, after which the sun will engulf our...
Regisserat av:

10
The Edge of Forever 1980-11-30
The Edge of Forever
1980-11-30
Dr. Sagan leads us on some awesome trips — to a time when galaxies were beginning to form, to India to explore the infinite cycles of Hindu cosmology, and to show how humans of this century discovered the expanding universe and its origin in the big bang. He disappears down a black hole and...
Regisserat av:

11
The Persistence of Memory 1980-12-07
The Persistence of...
1980-12-07
The brain is the focus of this fascinating portion of our journey as Dr. Sagan examines another of the intelligent creatures with whom we share the planet Earth — whales. Then we wind through the maze of the human brain to witness the architecture of thought. We see how genes, brains and books...
Regisserat av:

12
Encyclopaedia Galactica 1980-12-14
Encyclopaedia...
1980-12-14
Are there alien intelligences? How could we communicate with them? What about UFOs? The answers to these questions take us to Egypt to decode ancient hieroglyphics, to the largest radio telescope on Earth and, in the Spaceship of the Imagination, to visit other civilizations in space. Dr. Sagan...
Regisserat av:

13
Who Speaks for Earth? 1980-12-21
Who Speaks for...
1980-12-21
Through the use of special effects we retrace the 15-billion-year journey from the big bang to the present. We also hear the tragic story of the martyrdom of Hypatia, the woman scientist of ancient Alexandria. This is the famous episode on nuclear war in which Dr. Sagan argues that our...
Regisserat av: