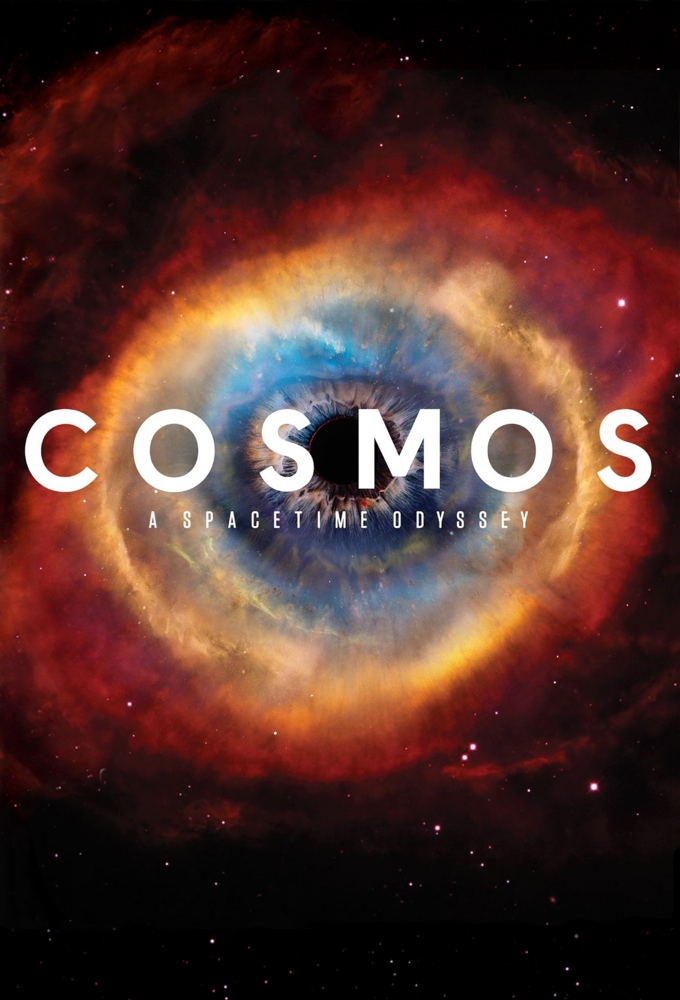 (2014)
Originaltitel: Cosmos: A Space-Time Odyssey
Release: 2014-03-09
TV-bolag: FOX
Längd per avsnitt: 60 min min
Status: AVSLUTAD
Hosted by renowned astrophysicist Neil deGrasse Tyson, Cosmos explores how we discovered the laws of nature and found our coordinates in space and time. It brings to life never-before-told stories of the heroic quest for knowledge and transport viewers to new worlds and across the universe for a vision of the cosmos on the grandest scale. The most profound scientific concepts are presented with stunning clarity, uniting skepticism and wonder, and weaving rigorous science with the... (TheTVDB)
Dokumentär

1
SÄSONG 1

1
Standing Up in the Milky Way 2014-03-09
Standing Up in the...
2014-03-09
The Ship of the Imagination, unfettered by ordinary limits on speed and size, drawn by the music of cosmic harmonies, can take us anywhere in space and time. It has been idling for more than three decades, and yet it has never been overtaken. Its global legacy remains vibrant. Now, its time once...
Regisserat av:

2
Some of the Things That Molecules Do 2014-03-16
Some of the Things...
2014-03-16
Host Neil deGrasse Tyson is on a voyage to explore the relatedness of all livings things and the possible evolution of life in the cosmos. Go on a journey to discover how artificial selection turned the wolf into canine breeds and how natural selection sculpted the complex human eye. Later, Tyson...
Regisserat av:

3
When Knowledge Conquered Fear 2014-03-23
When Knowledge...
2014-03-23
There was a time, not so long ago, when natural events could only be understood as gestures of divine displeasure. We will witness the moment that all changed, but first--The Ship of the Imagination is in the brooding, frigid realm of the Oort Cloud, where a trillion comets wait. Our Ship takes us...
Regisserat av:

4
A Sky Full of Ghosts 2014-03-30
A Sky Full of Ghosts
2014-03-30
An exploration of how light, time and gravity combine to distort our perceptions of the universe. We eavesdrop on a series of walks along a beach on summer nights in the year 1809. William Herschel, whose many discoveries include the insight that telescopes are time machines, tells bedtime stories...
Regisserat av:

5
Hiding in the Light 2014-04-06
Hiding in the Light
2014-04-06
The Ship of the Imagination travels back in time to reveal 11th century Europe and North Africa during the golden age of Islam, when brilliant physicist Ibn al-Haytham discovered the scientific method and first understood how we see, and how light travels. Later, William Herschel discovers the...
Regisserat av:

6
Deeper, Deeper, Deeper Still 2014-04-13
Deeper, Deeper,...
2014-04-13
The Ship of the Imagination ventures on an epic voyage to the bottom of a dewdrop to explore the universe on the smallest scale and observe exotic life forms invisible to the naked eye. Then, host Neil deGrasse Tyson explains the neural network in our brains which determine our sense of smell and...
Regisserat av:

7
The Clean Room 2014-04-20
The Clean Room
2014-04-20
To determine the true age of the Earth, geochemist Clair Patterson developed the uranium-lead dating method to make an unprecedented discovery—calculating Earths age of 4.5 billion years. But Pattersons groundbreaking discoveries were just beginning. Patterson made it his mission to draw public...
Regisserat av:

8
Sisters of the Sun 2014-04-27
Sisters of the Sun
2014-04-27
Discover the remarkable story of Annie Jump Cannon and Cecilia Payne, two incredible women who challenged conventional wisdom and uncovered the real-life story of the stars. Cannon led a group of astronomers in the early 20th century to catalogue the spectral characters of stars, and two decades...
Regisserat av:

9
The Lost Worlds of Planet Earth 2014-05-04
The Lost Worlds of...
2014-05-04
The Ship of the Imagination embarks on a journey through space and time to grasp how the autobiography of the Earth is written in its atoms, its oceans, its continents and all living things. Later, American geologist Marie Tharp creates the first true map of Earth’s ocean floor, and discovers...
Regisserat av:

10
The Electric Boy 2014-05-11
The Electric Boy
2014-05-11
Travel to 19th century England and meet Michael Faraday, a child of poverty who grew up to invent the motor and the generator. His ideas about electricity and discovery of magnetic fields changed the world and paved the way for future scientists to make giant strides in the world of high technology...
Regisserat av:

11
The Immortals 2014-05-18
The Immortals
2014-05-18
The Ship of the Imagination travels across the cosmos to discover the possibility of beings that live forever and explain why other civilizations perish. Then, visit the Cosmic Calendar of the Future and contemplate what lies ahead with a hopeful vision.
Regisserat av:

12
The World Set Free 2014-06-01
The World Set Free
2014-06-01
The Ship of the Imagination travels to our near neighbor Venus, where we begin our journey to discover the long history of global warming and the greenhouse effect. Later, explore the detrimental effects of climate change and trace the magnitude of our impact on the Earth’s atmosphere. However,...
Regisserat av:

13
Unafraid of the Dark 2014-06-08
Unafraid of the Dark
2014-06-08
The Ship of the Imagination makes a final journey to explore one of the biggest mysteries of the universe: dark energy. Meet one of sciences greatest unsung heroes, Fritz Zwicky, whose prediction of supernovas paved the way for our larger understanding of dark energy, the unknown force in the...
Regisserat av: