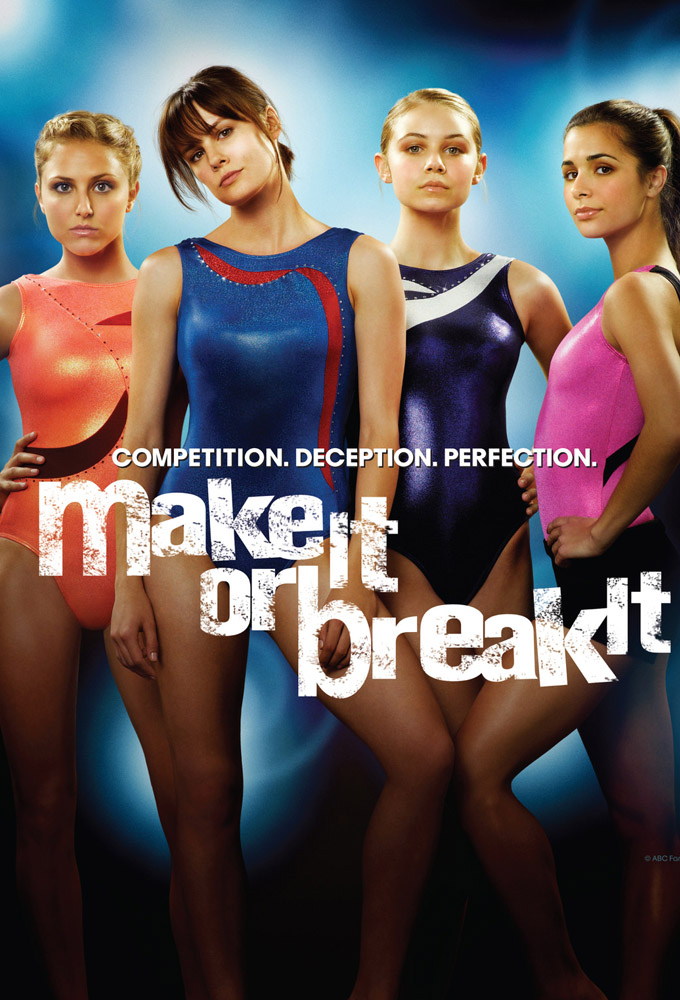 Make It or Break It

3
Blowing Off Steam 2009-07-06
Blowing Off Steam
2009-07-06
Tensions are still high at The Rock as the girls continue on without direction and with the surprise return of Lauren, Steve and a possible new heavyweight coach. Before the new coachs strict workout regimen takes effect, Emily, Payson and Kaylie decide to hit up a high school party to blow off...

5
Like Mother, Like Daughter, Like... 2009-07-20
Like Mother, Like...
2009-07-20
With a lack of funds facing The Rock team for Nationals, Kim and the other mothers decide to host a mother-daughter fashion show. But what starts as a fun idea ends up causing trouble for everyone. Ronnie is so busy with the details that Kaylie feels ignored, especially at a time when she could...
Regisserat av:

6
Between a Rock and a Hard Place 2009-07-27
Between a Rock and...
2009-07-27
Taking a gamble that the girls are ready and can use the motivation for Nationals, Sasha invites Marty and the Denver team to The Rock for an invitational meet. Payson is determined to show that she is the best, but when an old injury flares up, it might have devastating results. Emily is also...
Regisserat av:

8
Alls Fair in Love, War and Gymnastics 2009-08-10
Alls Fair in Love,...
2009-08-10
With everyone gearing up for Nationals, the pressure is on at The Rock. To celebrate, the Cruz family is hosting the Nationals send-off party where, it turns out, everyone has his/her own agenda. Still dealing with her back pain, Payson decides to take a fellow gymnast up on his offer for some...

10
All That Glitters 2009-08-24
All That Glitters
2009-08-24
The National Gymnastics Championship in Boston has arrived and now everything the girls of the Rock have been working for is at stake. Can Emily pull it together on the biggest stage of her life? Can Lauren put aside her anger towards...everyone and pull off a gold medal winning meet. Can Payson...

14
Are We Having Fun Yet? 2010-01-25
Are We Having Fun...
2010-01-25
Paysons life is about to get a bit harder when she has to become a regular high school student after being home schooled all her life. With the chaos at school, Payson feels more like a loser than ever and she becomes the new target for the school queen bee. Things get even worse when Kaylie, Emily...

15
Loves Me, Loves Me Not 2010-02-01
Loves Me, Loves Me...
2010-02-01
Valentines Day is just around the corner and whether they like it or not, the girls have to face the ones they love. Payson receives flowers and chocolates from her new friend at school, which prompts The Rock parents to over-analyze the situation. Meanwhile, Summer and Sasha share a moment of...

16
Save the Last Dance 2010-02-08
Save the Last Dance
2010-02-08
The girls all attend the prom at Paysons school, and Emily unexpectedly sees Damon there. Meanwhile, Lauren discovers that her dad is dating Chloe; Carter tries to reconnect with Kaylie; and a doctor suggests an experimental procedure for Paysons back.

19
The Only Thing We Have To Fear 2010-03-01
The Only Thing We...
2010-03-01
The Girls get ready for China. While the mothers help out making the girls feel welcome when they go, Damon and Emily confess their feelings toward each other, which makes Razor feel even worse, and Lauren tries to convince her Dad to break up with Chloe.