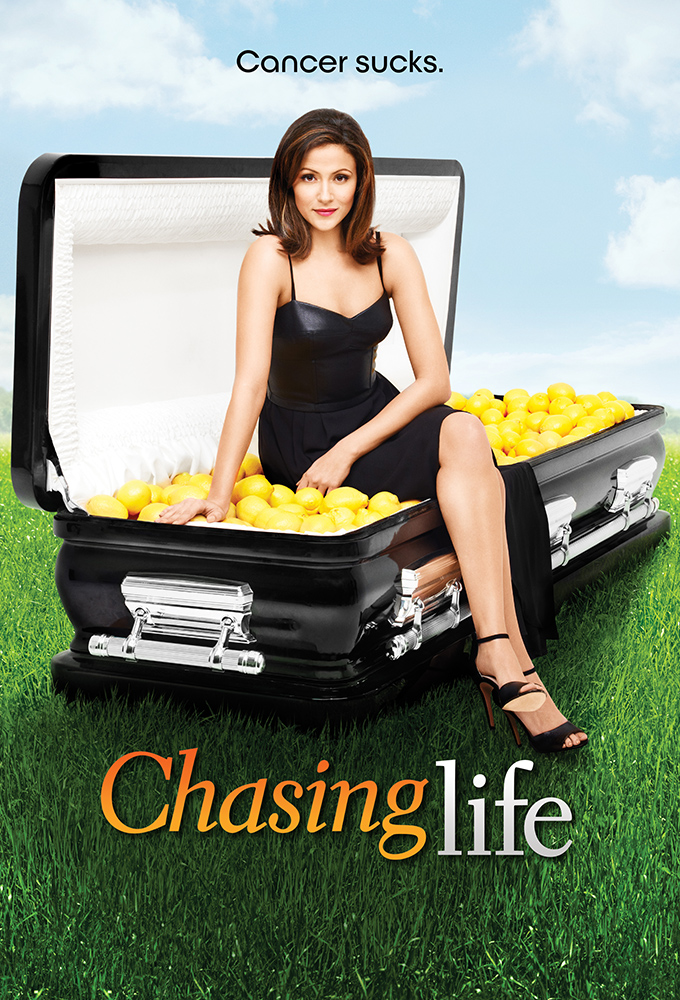 (2014)
Originaltitel: Chasing Life
Release: 2014-06-10
TV-bolag: ABC Family
Längd per avsnitt: 60 min min
Status: AVSLUTAD
April is a smart aspiring journalist in her 20s who tries to balance her ambitious career with her family, which includes her widowed mom, rebellious little sister, and her grandmother. We meet April at a pivotal moment in her life: shes landed a fantastic opportunity to impress her hard-nosed Boston newspaper editor and an office romance with her super-sexy co-worker Dominic is just beginning to blossom. In an unexpected twist of fate, April lands in the hospital where her estranged... (TheTVDB)
Drama

1
2
SÄSONG 1

1
Pilot 2014-06-10
Pilot
2014-06-10
In the series premiere of this drama about an ambitious reporter who wont give up on her dreams, April gets a chance to impress her boss and her office romance begins to prosper, and then she receives unexpected news: Shes been diagnosed with cancer.
Regisserat av:

2
Help Wanted 2014-06-17
Help Wanted
2014-06-17
As April learns more about her cancer and prospective treatment, she is determined not to let it affect her progress at work. A new assignment to profile gubernatorial candidate Bruce Hendrie leads to an unexpected run-in with his son, Leo. April also makes a startling discovery about her family....
Regisserat av:

3
Blood Cancer Sex Carrots 2014-06-24
Blood Cancer Sex...
2014-06-24
As things begin to heat up with Dominic, April second-guesses the status of their relationship when she learns he has a reputation as the office playboy. To help take her mind off of Dominic and to start facing the reality of her symptoms, she volunteers for an assignment at work about a supposed...
Regisserat av:

4
Ill Sleep When Im Dead 2014-07-01
Ill Sleep When Im...
2014-07-01
April finds it harder to juggle the increasing severity of her symptoms with her obligations at work and her attempts to be a supportive daughter and sister. After missing an important appointment, George urges April to get her priorities straight. April also learns more about Leo Hendrie, but Leo...
Regisserat av:

5
The Family That Lies Together 2014-07-08
The Family That...
2014-07-08
Dominic takes April to see a psychic for fun, but the results disturb both of them, leading Dominic to come clean to April about a family secret. When her own family secrets become too much for her to bear alone, April enlists Dominic’s help in learning more about her sister, Natalie. Meanwhile,...
Regisserat av:

6
Clear Minds, Full Lives, Cant Eat! 2014-07-15
Clear Minds, Full...
2014-07-15
April goes on a joyride with Leo prior to beginning her treatment, and she gains insight into Leos recklessness and the severity of his illness. Elsewhere, Brenna has doubts about her romance with Kiernan, especially when it affects her friendship with Greer.
Regisserat av:

7
Unplanned Parenthood 2014-07-22
Unplanned Parenthood
2014-07-22
April sees a fertility doctor to learn about her options prior to starting chemotherapy and looks to her cancer support group for advice on how to tell Dominic about her leukemia. She gets Leos blessing to write a piece that paints Bruce Hendrie in an unflattering light and wins some hard-earned...
Regisserat av:

8
Death Becomes Her 2014-07-29
Death Becomes Her
2014-07-29
When a friend and fellow member of her support group faces a worsening prognosis, April begins to think more about death and her own mortality. She blows off a nightmare assignment to play hooky from work with Beth and other members of the support group and learns something surprisingly endearing...
Regisserat av:

9
What To Expect When Youre Expecting... 2014-08-05
What To Expect When...
2014-08-05
With only a few days left before April has to check herself into the hospital for aggressive chemotherapy, April is determined to live as normal a life as ever. But as she has to deal with Leo drama, Beth falling apart, and trying to live under the hovering eye of Sarah, April quickly learns that...
Regisserat av:

10
Finding Chemo 2014-08-12
Finding Chemo
2014-08-12
April begins her battle and month-long hospital stay with mixed emotions. Her resolve to fight starts to wane as her treatments take a toll. Not sure she can be cooped up in the hospital for much longer, April begins to panic. With her family by her side, April makes a surprising outreach to...

11
Locks of Love 2014-12-09
Locks of Love
2014-12-09
Aprils grandparents stir up trouble when they pay a visit, and the Carvers celebrate an early family Christmas. The full contents of Leos cryptic voicemail are revealed, leading April and Leo to rethink their last goodbye. In an attempt to help her friend cope with the effects of chemo, Beth helps...
Regisserat av:

12
Next April 2015-01-19
Next April
2015-01-19
After leaving Leo flat-lining at the end of the Christmas episode, April must deal with the outcome of the surgery. Facing her new reality, she must also face her first day back at work after being gone for four months. In remission and determined to move on with her life, her return reveals a new,...

13
Guess Whos Coming to Donate 2015-01-26
Guess Whos Coming...
2015-01-26
Natalie finds out she is a half-match for April; but upon learning what the donation entails, she reconsiders going through with the procedure. Saras attempts to change her mind only to bring up bitterness over the past. April has to re-earn her bosss trust after screwing up her last interview and...

14
Cancer Friends With Benefits 2015-02-02
Cancer Friends With...
2015-02-02
While April and Leo try chart new relationship waters, April and Dominic spend an incredibly awkward night together covering the same event for the newspaper, and its clear that the pain of their breakup is still very fresh. With Dominics heart on his sleeve and not knowing where she stands with...

15
April Just Wants to Have Fun 2015-02-09
April Just Wants to...
2015-02-09
April starts to regret becoming such a homebody, especially when she learns Beth has been partying without her. When Beth hosts a house party, April lets loose - a little too loose - which leads to a major blowout with her friend. The new school year finds Brenna feeling alone and bullied, but an...

16
The Big Leagues 2015-02-16
The Big Leagues
2015-02-16
April gets some welcome news from Dr. Hamburg that bodes well for both her and Leo. At work, she gets wind of a possible story opportunity with baseball player Richie Miranda, but when she gets a bigger scoop than she bargained for, she is faced with a tough moral choice. Meanwhile, Leo grows...

17
Model Behavior 2015-02-23
Model Behavior
2015-02-23
April feels the backlash from a recent, controversial article, especially when it becomes national news and it turns into a case of he said, she said and her job is on the line. Beth has an opportunity to impress her new boss by booking real teen models for an upcoming fashion show, and she...

18
Rest in Peace 2015-03-02
Rest in Peace
2015-03-02
April panics about a recent recurrence of her cancer symptoms and her worries increase about the stability of her remission. A desperate search for ways to alleviate her anxiety leads her down unexpected paths. The tension between April and Leo is still palpable, but a twist of fate may encourage...

19
Life, Actually 2015-03-09
Life, Actually
2015-03-09
April and Beth confide their doubts about each other’s boyfriends and decide to arrange a double date to get to know the guys better. April tries to hide her disappointment when Leo pulls away from the cancer support group while Beth and Graham find themselves at odds over a recent big decision....

20
No News Is Bad News 2015-03-16
No News Is Bad News
2015-03-16
The new pick for Editor In Chief at The Post comes as a surprise to everyone, and the pressure is on for April not to let her new boss down. As the competition heats up at work, pitting April and Danny against each other for the next big scoop, April starts to wonder if she is willing to sacrifice...

21
One Day 2015-03-23
One Day
2015-03-23
April is blindsided by bad news but fights to maintain control over her destiny and to stay strong for her family. She also learns that The Post is cleaning house, but despite her determination to keep her job, extenuating circumstances keep her head on the chopping block. Meanwhile, Brenna learns...