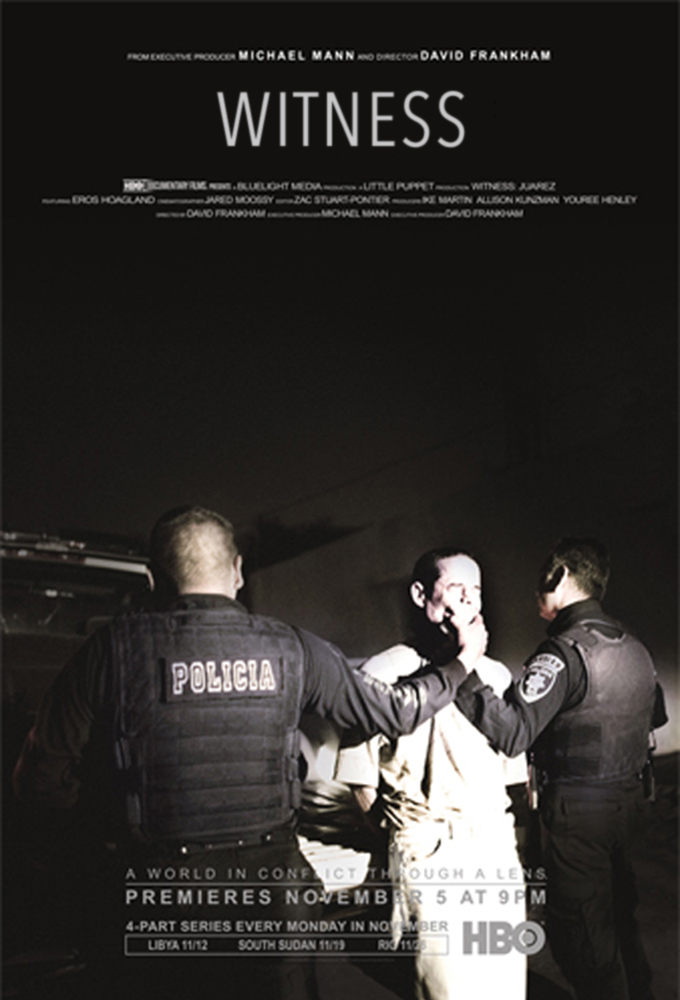 (2012)
Originaltitel: Witness
Release: 2012-11-05
TV-bolag: HBO
Längd per avsnitt: 30 min min
Status: AVSLUTAD
Drug trafficking, poverty, gang violence, corruption and ethnic warfare have created some of the most dangerous hot spots on Earth. Witness follows our current generation of photojournalists into these conflict zones in Mexico, Libya, Brazil and South Sudan. In the four-part series, war photographers carry us into the heart of the human drama of the people in the action on the ground. We see what compels the photojournalist and experience why, when everyone else seeks cover, the... (TheTVDB)
Dokumentär

1
SÄSONG 1

1
Juarez 2012-11-05
Juarez
2012-11-05
Pro journalist Eros Hoagland has worked in conflict zones in Iraq, Afghanistan and Haiti, but his focus, here, is Juarez, Mexico, the murder capital of the world. Drug violence in Juarez has left over 10,000 dead, and the drugs are still flowing north. Eros began work as a photojournalist in 1993,...
Regisserat av:

2
Libya 2012-11-12
Libya
2012-11-12
Michael Christopher Brown has been to Libya five times during the conflicts that brought down Gaddafis rule. Now, the revolution is over, but the chaos has only begun; the current situation in Libya is even more complicated. Internecine fighting continues, not unexpectedly. After 42 years of...
Regisserat av:

3
South Sudan 2012-11-19
South Sudan
2012-11-19
In South Sudan, thousands have been killed, abducted or displaced by Joseph Konys Lords Resistance Army. French photojournalist Veronique de Viguerie travels with the Arrow Boys, an unpaid militia of farmers who took up arms to protect their families from the LRA. For the last two decades, Joseph...
Regisserat av:

4
Rio 2012-11-26
Rio
2012-11-26
Though Rio de Janeiro will host the Summer Olympics in 2016, the city currently remains crippled by a war raging between police and powerful drug gangs. Over 2,000 Brazilian military have taken to the streets in a largest offensive in decades. They are taking on the Red Command and Amigos de...
Regisserat av: