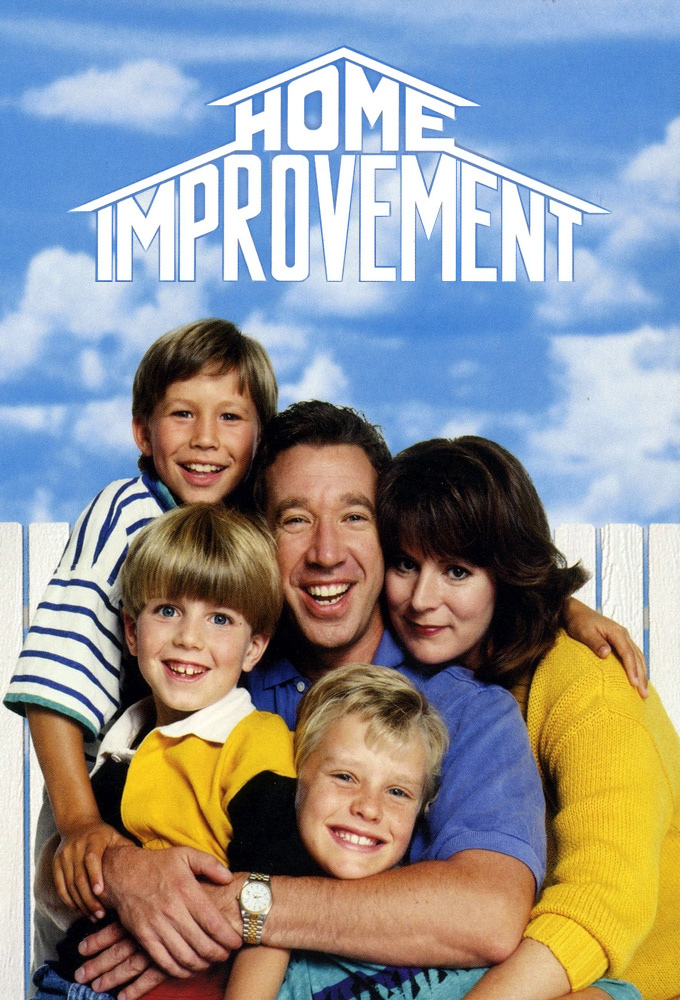 (1991)
Originaltitel: Home Improvement
Release: 1991-09-17
TV-bolag: ABC
Längd per avsnitt: 30 min min
Status: AVSLUTAD
Home Improvement is a family sitcom about Tim The Tool man Taylor (Tim Allen), the host of a local cable home improvement show called Tool Time. Home Improvement looks at Tim at work, and at home, as the husband of Jill (Patricia Richardson) and the father to three teenage boys. Having been married for almost 20 years, Tim and Jill have had their share of fights, but with the help of their wise, mysterious neighbor Wilson W. Wilson, Jr. (Earl Hindman), things often turn out all right. (TheTVDB)
Komedi

3
Off Sides 1991-10-01
Off Sides
1991-10-01
When she cant find a babysitter, Jill has a magician watch the kids while she and Tim go on their romantic dinner. However, Tim is too distracted by a football game to pay attention to her. Meanwhile, the kids accidentally lock the magician in a trunk.
Regisserat av:

7
Nothing More Than Feelings 1991-10-29
Nothing More Than...
1991-10-29
After Jill drove while her oil light was on, Tim shares this with the Tool Time audience and the other guys say their wives dont respect their tools.
Regisserat av:

8
Flying Sauces 1991-11-05
Flying Sauces
1991-11-05
The K&B Construction guys are invited on Tool Time to show how to make hot gourmet meals while on the job site. They use the tools of their trade to make meals anyone would be proud of. At home, Jill is fed up with Brad and Randy excluding Mark from their games so she has a talk with them. Brad and...
Regisserat av:

13
Up Your Alley 1992-01-07
Up Your Alley
1992-01-07
Tim and Jill have a bowling match against each other and try no to make it competitive, until the K&B Construction guys show up. The boys get in trouble at an arcade.
Regisserat av:

16
Jills Birthday 1992-02-04
Jills Birthday
1992-02-04
Tim gets Jill a lifetime membership to a health care club, until she says she will never exercise again. Brad and Randy spend all of their money on a baseball card, so they make Mark give them a brother tax to get Jill a present.
Regisserat av:

20
Birds Of A Feather Flock To Taylor 1992-03-03
Birds Of A Feather...
1992-03-03
Jill tells Tim that he is a bad listener when he doesnt remember her mentioning the opera fundraiser. Brad and Randy try to get Mark to eat a worm while working on a birdhouse.
Regisserat av: