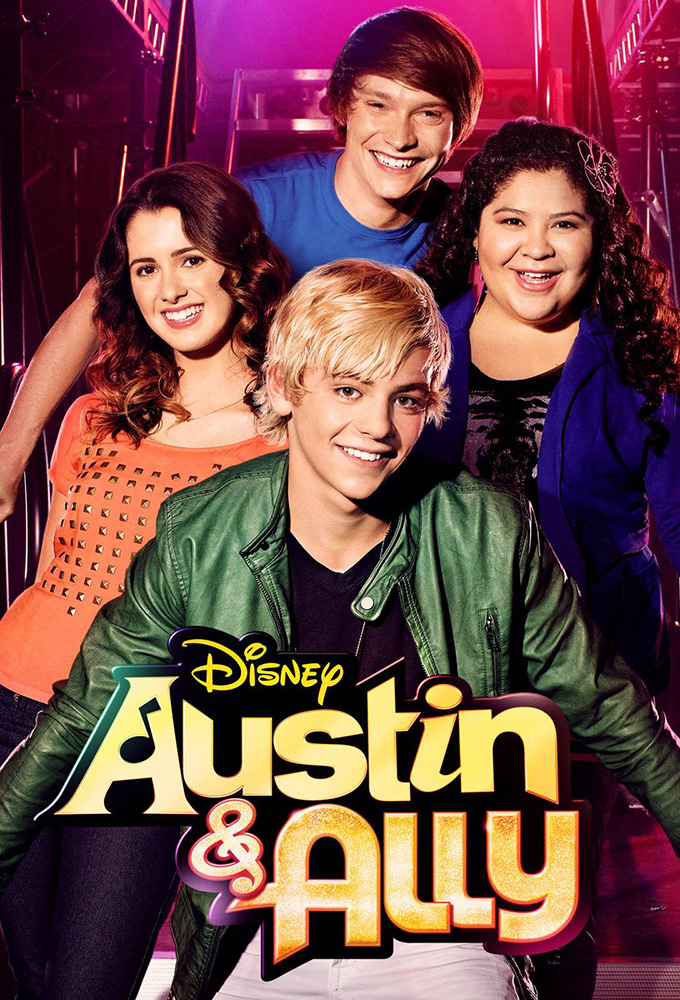 (2011)
Originaltitel: Austin & Ally
Release: 2011-12-02
TV-bolag: Disney Channel
Längd per avsnitt: 25 min min
Status: AVSLUTAD
A comedy about the unique relationship between a young songwriter, Ally Dawson, and Austin Moon, the overnight internet sensation who gains sudden notoriety after performing one of Allys songs. Austin and Ally struggle with how to maintain and capitalize on Austins newfound fame. Austin is more of a rebel type who doesnt follow the rules and is somewhat immature for his age, while Ally is conservative yet self-conscious. (TheTVDB)
Komedi

SPECIAL
1
2
3
4
SÄSONG 1

1
Rockers & Writers 2011-12-02
Rockers & Writers
2011-12-02
Unbeknownst to Ally, Austin and Dez accidentally borrow one of her songs, record it, create a video, and post it on the Internet; after which the song and Austin, become an overnight Internet sensation. When Trish convinces Ally to tell the world she wrote the song, Ally confronts Austin but he...
Regisserat av:

8
Club Owners & Quniceaneras 2012-02-19
Club Owners &...
2012-02-19
Trish is having a quinceañera, a Mexican party that celebrates a 15-year-old girls coming of age. She mentions that one of her relatives, Emilio, a big-time club owner, will be at her party. Austin decides to perform at Trishs party, so he can impress Emilio to book him in his clubs. Trish invites...
Regisserat av:

11
Songwriting & Starfish 2012-03-11
Songwriting &...
2012-03-11
The gang tries to help Austin get ready for the Hot Summer Jam Contest on the beach, where he could win a chance to have his song played on the radio. Meanwhile, Ally tries to put her previous, unpleasant beach-going experiences behind her.
Regisserat av:

12
Soups & Stars 2012-03-25
Soups & Stars
2012-03-25
Ally is excited to find that Miss Suzys Soups is owned by her favorite former music teacher, Miss Suzy. Ally is the only student or person that Miss Suzy never gave a gold star to so Ally sees a chance to finally earn one. When a gag photo of a giant plastic spider in a bowl of her soup goes viral...
Regisserat av:

13
Burglaries & Boobytraps 2012-04-15
Burglaries &...
2012-04-15
Theres an Alphabit Burglar working the stores in the mall and all the evidence points to Austin as the thief. Ally, Trish and Dez must come up with a plan to catch the real thief before the angry mob gets to Austion.
Regisserat av:

14
myTAB & My Pet 2012-04-22
myTAB & My Pet
2012-04-22
When Ally brings her pet cockatiel Owen to keep everyone company in line, Austin accidentally opens the cage. Now Austin, Trish,and Dez must find him before Ally finds out. Meanwhile, the gang tries to receive the all new myTAB.
Regisserat av:

16
Diners & Daters 2012-06-17
Diners & Daters
2012-06-17
Austin falls for a singing waitress and tries to get her interested in him by having Ally write a special song for her. Dez tries fending off Mindys attention but pot-pies keep getting in the way.
Regisserat av:

19
Albums & Auditions 2012-09-09
Albums & Auditions
2012-09-09
Ally gets accepted to a music school and is excited that Austin, Dez and Trish sent in an application on her behalf. Unfortunately, the school is in New York, forcing Ally to decide if she wants to move and leave her friends behind.
Regisserat av: