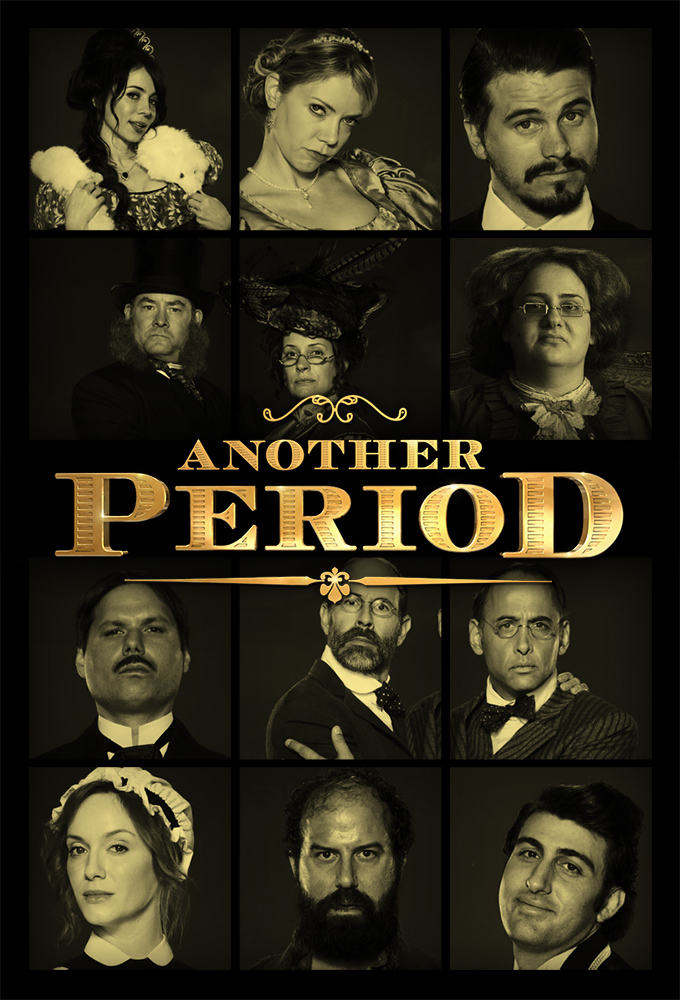 (2015)
Originaltitel: Another Period
Release: 2015-06-23
TV-bolag: Comedy Central
Längd per avsnitt: 30 min min
Status: AVSLUTAD
Set at the turn of the century, “Another Period” follows the misadventures of the Bellacourts, Newport, RI’s first family, who have absolutely nothing to offer to the world, but who have so much money it doesn’t matter. The series focuses on sisters “Lillian” (Natasha Leggero) and “Beatrice” (Riki Lindhome), who care only about how they look, what parties they attend and becoming famous, which is a lot harder in 1902. (TheTVDB)
Komedi

2
Divorce 2015-06-30
Divorce
2015-06-30
Lillian wants a divorce when she hears that theyre all the rage; Frederick and Garfield are smitten with a charming visitor.

3
Funeral 2015-07-07
Funeral
2015-07-07
Lillian and Beatrice stage mock funerals for their husbands; Peepers learns of his fathers death from his estranged family, forcing him confront his Native American roots.

4
Pageant 2015-07-14
Pageant
2015-07-14
Chair receives a lesson in the art of servitude from Peepers. Meanwhile, Lillian and Beatrice get ready for Newports Most Beautiful Pageant, but Hortense sets out to sabotage the event.

5
Senate 2015-07-21
Senate
2015-07-21
Hortense falls for a chef who accompanies the Commodore on his return to Bellacourt Manor. Meanwhile, Frederick is subjected to a psychological evaluation to determine if hes fit for a Senate run; and Hamish tries to blackmail Chair.

7
Switcheroo Day 2015-08-04
Switcheroo Day
2015-08-04
Lillian arranges her own kidnapping in order to achieve fame as an abductee; Dodo orders Peepers to impersonate the Commodore and accompany her to a luncheon; Beatrice mistakes Blanche for a fellow aristocrat.

9
Rejects Beach 2015-08-18
Rejects Beach
2015-08-18
Lillians new friends invite her to a beach party; Beatrice is brought to Thomas Edison for a forbidden experiment; Blanche receives a mysterious letter from the Triangle Shirtwaist Factory; Garfield tries to keep the family from falling apart.

10
Modern Pigs 2015-08-25
Modern Pigs
2015-08-25
Chairs true intentions are revealed, which sends Peepers on a mission to save the Bellacourts from destruction. Meanwhile, Lillian and Beatrice try to stop Fredericks wedding.