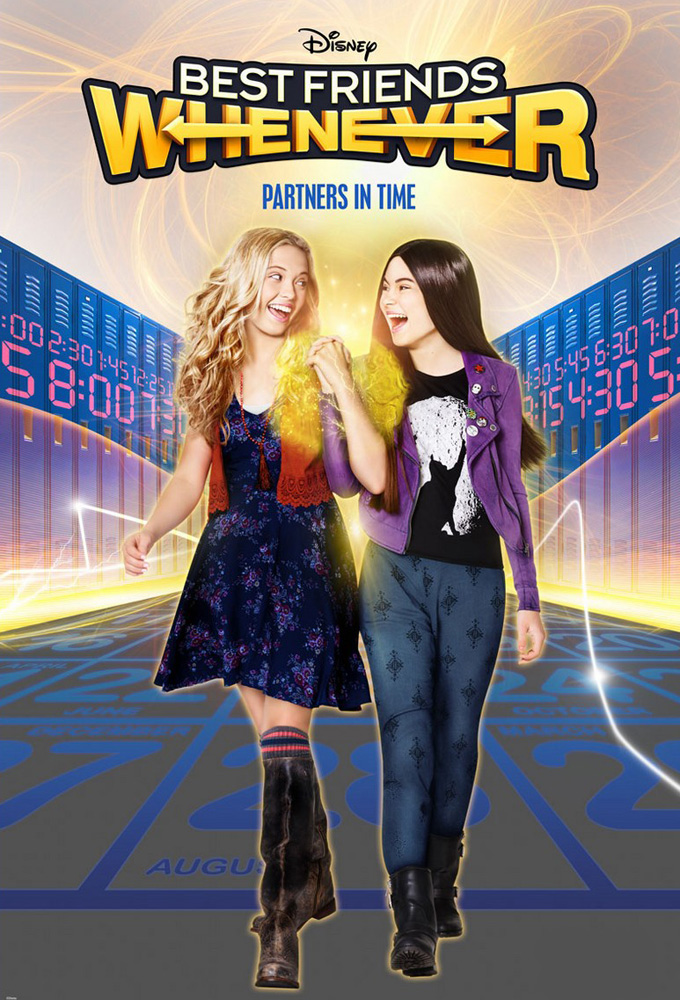 (2015)
Originaltitel: Best Friends Whenever
Release: 2015-06-26
TV-bolag: Disney Channel
Längd per avsnitt: 30 min min
Status: AVSLUTAD
The series follows Shelby and Cyd, who gain the power to leap forward and backward in time whenever they want – and sometimes when they don’t. Now, the duo experience the twists and turns of friendship as they try to decide between fixing mistakes in the past or catching a glimpse of the future. While aspiring scientist Barry and his trusty assistant, Naldo, try to figure out how to replicate time travel for themselves, Cyd and Shelby use their newfound power to navigate high... (TheTVDB)
Barn Komedi

1
2
SÄSONG 1

1
A Time to Travel 2015-06-26
A Time to Travel
2015-06-26
Best friends Shelby and Cyd gain the unpredictable power to travel back and forth in time when one of their friend Barrys science inventions goes awry. With their newfound power, the teen besties try to fix the mishaps that spoiled Shelbys plans to ask her crush Cameron out to the school dance.

2
A Time to Cheat 2015-07-12
A Time to Cheat
2015-07-12
When Cyd and Shelby are having trouble studying for a difficult history test, they decide to jump ahead in time and nab the test questions. Meanwhile, Barry and Naldo find themselves in a hair-raising situation when they try to figure out how to make Barry’s invention replicate time travel.

3
A Time to Say Thank You 2015-07-19
A Time to Say Thank...
2015-07-19
When Cyd tries to plan a special thank you for the Marcus family, Shelby steps in to help with hulu dancers, a rock band and jugglers and everything somehow leads to a big misunderstanding and a huge kitchen disaster.

4
A Time to Jump and Jam 2015-07-26
A Time to Jump and...
2015-07-26
Cyd and Shelby travel back to relive one of their favorite memories from middle school, but the moment winds up being totally different than what they both remembered. Now, they begin to question everything that happened on that particular day.

6
The Butterscotch Effect 2015-08-16
The Butterscotch...
2015-08-16
Cyd and Shelby go back to change the past so that Barry can meet his childhood science hero. However, when they return, they realize Barry and Naldo have changed as well and are now terrible rock musicians instead of aspiring scientists.

7
Shake Your Booty 2015-08-23
Shake Your Booty
2015-08-23
When the girls are assigned to do a report on the 1970s disco era, they decide to travel back and experience the 70s firsthand and land in the midst of turf battle between the disco and punk kids.

11
Cyd and Shelby Strike Back (Part 1) 2015-11-27
Cyd and Shelby...
2015-11-27
When the girls discover inventor and GDD CEO Janet Smythe is behind the future lab, they decide to fight back and travel to the past to stop Janet from starting the corporation. Their plan seems to work until they realize they also stopped other major events from happening in their lives, including...

12
Cyd and Shelby Strike Back (Part 2) 2015-11-27
Cyd and Shelby...
2015-11-27
When the girls discover inventor and GDD CEO Janet Smythe is behind the future lab, they decide to fight back and travel to the past to stop Janet from starting the corporation. Their plan seems to work until they realize they also stopped other major events from happening in their lives, including...

13
The Girls of Christmas Past 2015-12-06
The Girls of...
2015-12-06
Things spin out of control when Cyd travels back to Christmas the year before to try and figure out the perfect gift for Shelby. Meanwhile, Barry and Naldos Winter Wonderland experiment sparks an elf war with Bret and Chet leading the charge.

15
Jump to the 50s 2016-03-20
Jump to the 50s
2016-03-20
When Shelbys adventurous Grandma Rita comes to visit, the girls learn time travelers were responsible for setting up Shelbys grandparents and they jump to the 1950s to investigate.

17
Fight The Future: Part 1 2016-05-08
Fight The Future:...
2016-05-08
When the girls discover their future-selves have asked to lose their time travel abilities, they leap to the future and see that evil Janet Smythe is somehow involved. Meanwhile, Barry learns Marci is planning to break up with him.