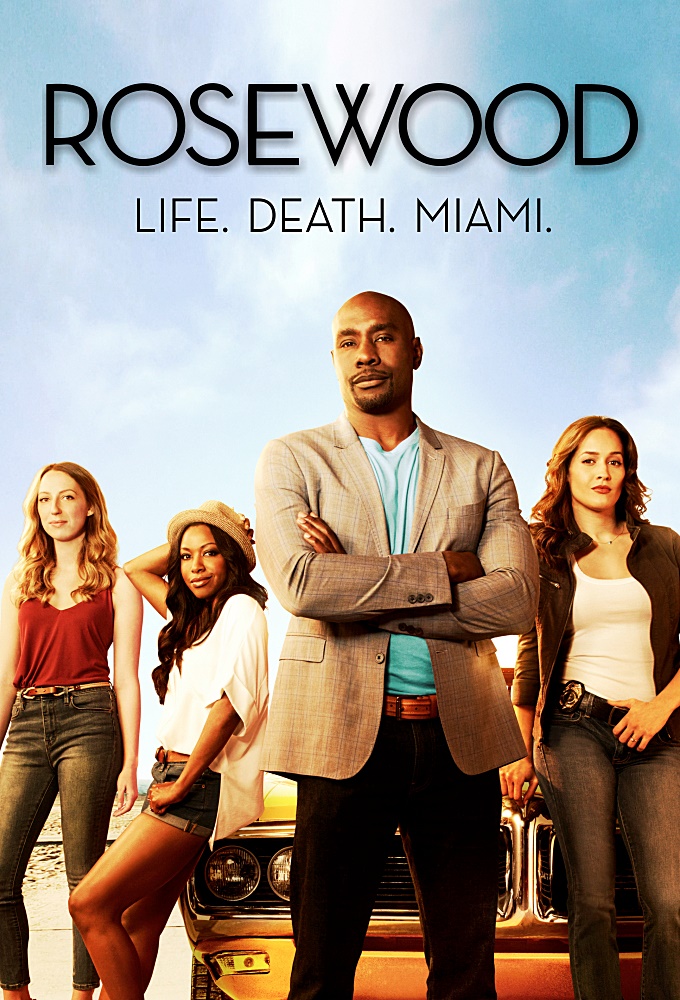 (2015)
Originaltitel: Rosewood
Release: 2015-09-23
TV-bolag: FOX (US)
Längd per avsnitt: 45 min min
Status: AVSLUTAD
ROSEWOOD stars Morris Chestnut as Dr. Beaumont Rosewood, Jr., a brilliant private pathologist who uses wildly sophisticated technology and his drive to live life to the fullest to help a tough-as-nails detective and the Miami PD uncover clues no one else can see. (TheTVDB)
Drama

1
2
SÄSONG 1

1
Pilot 2015-09-23
Pilot
2015-09-23
Set against the vibrant backdrop of one of the worlds hottest cities - Miami - private pathologist Dr. Beaumont Rosewood, Jr. must crack a case that hits close to home. As he begins his investigation, Detective Annalise Villa gives him a run for his money as they cross paths and are forced to work...
Regisserat av:

2
Fireflies and Fidelity 2015-09-30
Fireflies and...
2015-09-30
When an unexpected piece of evidence surfaces in the 305, Rosewood and Villa attempt to solve a serious crime involving a very well-off Miami man. Meanwhile, Rosewood struggles to balance a new romantic interest with the demands of his mother, and Villa runs into trouble on the job.
Regisserat av:

3
Have-Nots and Hematomas 2015-10-07
Have-Nots and...
2015-10-07
A series of mysterious deaths pulls Rosewood off the glamorous promenades of South Beach when a troubled young genius stands accused of murder, and the only one who believes in his innocence is Rosewood. He must contend with a colorful new adversary, escalating health problems and a burgeoning...
Regisserat av:

5
Necrosis and New Beginnings 2015-10-21
Necrosis and New...
2015-10-21
Rosewood and Villa seek justice for a murdered ex-con who had ties to a Little Haiti gang; Villa struggles with her recent dreams; Rosewood faces an unexpected turn in his relationship with Kat.
Regisserat av:

7
Quadriplegia and Quality Time 2015-11-11
Quadriplegia and...
2015-11-11
Rosewood testifies for the prosecution during a murder trial, going up against his father, the expert witness for the defense; a surprising announcement has unexpected consequences.

8
Bloodhunt and Beats 2015-11-18
Bloodhunt and Beats
2015-11-18
A bounty hunter who happens to be Hornstocks former partner helps Rosewood and Villa track a murderer; Pippy receives an opportunity that could launch her music career; Villa attempts to reconnect with her mother.
Regisserat av:

9
Fashionistas and Fasciitis 2015-11-25
Fashionistas and...
2015-11-25
Amidst the glitz and glamour of Miami Fashion Week, theres a plot to kill one of the citys hottest new designers, who turns to Rosewood for help. As the case takes Rosewood and Villa from the catwalk to the perp walk, Rosewood learns of his shared past with the victim. When he enlists the aid of...
Regisserat av:

11
Paralytics and Priorities 2016-03-02
Paralytics and...
2016-03-02
Picking up where the series left off after the fall finale, the search for the serial killer takes a very personal turn, as Rosewood and Villa must follow a trail of clues left for Rosie, before another victim falls prey. As things heat up between Villa and Mike, Villa escapes by throwing herself...
Regisserat av:

12
Negative Autopsies and New Partners 2016-03-09
Negative Autopsies...
2016-03-09
Hornstock forces Villa to pick a new partner, and she immediately clashes with the one assigned to her. After learning she cost Hornstock the job as Chief, Villa tries to make herself less of a liability, which reveals a surprising pattern in her life. Meanwhile, the death of a victim forces Pippy...
Regisserat av:

13
Ballistics and BFFs 2016-03-16
Ballistics and BFFs
2016-03-16
Rosewood’s partnership with Villa faces an uncertain future when she’s paired with a recent transfer to the East Miami PD, with whom she shares a past. As Villa and her new partner investigate the death of a suburban dentist who ran a yuppie drug ring, Rosewood can’t shake the feeling that...
Regisserat av:

14
Hydrocephalus and Hard Knocks 2016-03-23
Hydrocephalus and...
2016-03-23
Rosie insists on celebrating his and Villas nine-and-a-half month anniversary as partners, which lands them in the middle of a case involving none other than Julius Joo-Joo Beeman, their confidential informant. But, this time, Joo-Joo is the prime suspect. As Rosie and Villa work to uncover the...
Regisserat av:

15
Atherosclerosis and the Alabama... 2016-03-30
Atherosclerosis and...
2016-03-30
While at an out-of-town forensic pathology convention, Rosewood unintentionally reveals the blueprint to commit the perfect murder during a speech to the convention attendees. Tormented, and armed only with a hunch, Rosewood enlists Villa to help solve the crime, and while investigating undercover,...
Regisserat av:

16
Dead Drops and Disentanglement 2016-04-13
Dead Drops and...
2016-04-13
Rosewood investigates the suspicious death of a man with medical issues similar to his own, which forces him to slightly adjust the tint on his Rosie-colored lenses and confront his own mortality. Also adding to his stress, he finds himself trapped between Donna and his girlfriend/cardiologist, Dr....
Regisserat av:

17
Silkworms y Silencio 2016-04-20
Silkworms y Silencio
2016-04-20
Rosewood and Villa investigate the murder of a telenovela star, holding a mirror up to their own relationship as they explore a world of off-screen soap and intrigue. Meanwhile, Erica strong-arms her way into Rosewoods life, much to Donnas chagrin. Then, Rosewoods precious GTO is stolen, and Villa...
Regisserat av:

18
Thorax, Thrombosis & Threesomes 2016-04-27
Thorax, Thrombosis...
2016-04-27
When two bodies and lot of cash wash up on the shore of Miami Beach, Rosewood and Villa are forced to work with a rival private pathologist who threatens Rosewood’s contract with the East Miami Police Department. Meanwhile, Daisie moves in with Villa and oversteps her boundaries, while TMI tries...
Regisserat av:

19
Sudden Death & Shades Deep 2016-05-04
Sudden Death &...
2016-05-04
Despite each being at the top of their fields, Villa and Rosewood are stumped when a local musician and king of catchy jingles suddenly keels over in his studio with no discernable cause of death. Meanwhile, Donna enlists Mitchie to investigate Erica’s “missing year”.
Regisserat av:

21
Wooberite & The Women of Rosewood 2016-05-18
Wooberite & The...
2016-05-18
An old flame of Rosewoods shakes up Rosewoods life when she returns to enlist his help in finding a wealthy patient of hers whos disappeared. But when the mans body surfaces, triggering a murder investigation, things are not what they appear to be. As the bizarre turns of this case come to a head,...
Regisserat av:

22
Badges & Bombshells 2016-05-25
Badges & Bombshells
2016-05-25
Rosie and Villa find themselves caught in the middle of an explosive investigation that makes them question whether justice really is blind. Meanwhile, as the decks are cleared for Rosie and Villa to finally act on their feelings, Rosie stumbles on some information that forces him to embark on his...
Regisserat av: