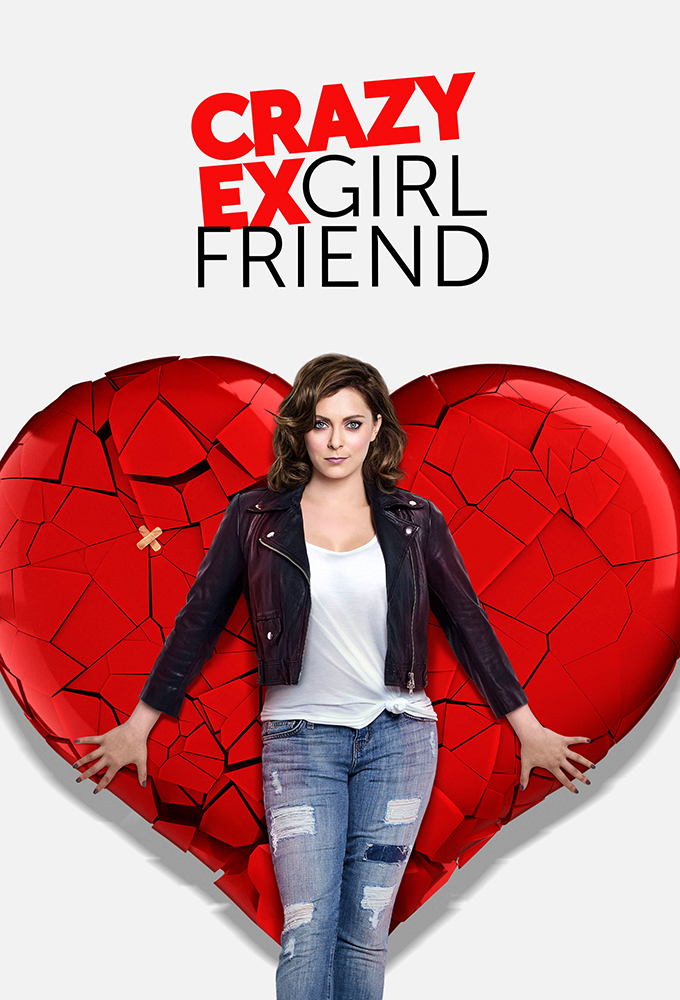 (2015)
Originaltitel: Crazy Ex-Girlfriend
Skapad av:
Release: 2015-10-12
TV-bolag: The CW
Längd per avsnitt: 60 min min
Status: AVSLUTAD
Rebecca Bunch is a successful, driven, and possibly crazy young woman who impulsively gives up everything - her partnership at a prestigious law firm and her upscale apartment in Manhattan - in a desperate attempt to find love and happiness in that exotic hotbed of romance and adventure: suburban West Covina, California. (TheTVDB)
Komedi

1
2
3
4
SÄSONG 1

1
Josh Just Happens to Live Here! 2015-10-12
Josh Just Happens...
2015-10-12
Rebecca Bunch is a successful, driven, and possibly crazy young woman who impulsively gives up everything – her partnership at a prestigious law firm and her upscale apartment in Manhattan – in a desperate attempt to find love and happiness in that exotic hotbed of romance and adventure:...
Regisserat av:

2
Josh’s Girlfriend is Really Cool! 2015-10-19
Josh’s Girlfriend...
2015-10-19
When Rebecca learns that Josh has a gorgeous yoga instructor girlfriend named Valencia, she is determined to learn everything about her. Rebecca attempts (unsuccessfully) to learn yoga, tries (unsuccessfully) to get into the local nightclub Josh and Valencia go to, and finds herself becoming a...
Regisserat av:

3
I Hope Josh Comes to My Party! 2015-10-26
I Hope Josh Comes...
2015-10-26
In an attempt to get closer to Josh, Rebecca throws a housewarming party despite her lack of social connections in West Covina and a childhood fear of hosting parties. When Paula finally convinces her, the party turns out to be nothing like they anticipated.
Regisserat av:

4
I’m Going on a Date with Josh’s... 2015-11-02
I’m Going on a...
2015-11-02
When Rebecca learns that Josh and Valencia seem as happy as ever, she goes into a spiral and vows to make healthier choices. As a result, when nice guy Greg asks her out on a date, she wonders if that is the path towards a happier life.
Regisserat av:

5
Josh and I Are Good People! 2015-11-09
Josh and I Are Good...
2015-11-09
After Rebecca and Greg’s disastrous date, Greg accuses her of being a terrible person in front of Josh. Rebecca takes drastic measures to prove she is a good person, which includes helping Darryl with his messy divorce. Meanwhile, Paula takes over the office as the boss for the day.
Regisserat av:

6
My First Thanksgiving with Josh! 2015-11-16
My First...
2015-11-16
Rebecca scores an invite to the Chan family Thanksgiving festivities, where Josh’s parents fall in love with her much to Valencia’s dismay. Meanwhile, Greg struggles with taking care of his dad and wanting to pursue his dreams.
Regisserat av:

7
Im So Happy That Josh is So Happy! 2015-11-23
Im So Happy That...
2015-11-23
Rebecca has a tough week after learning some news about Josh and someone surprising shows up to help her - Dr. Phil. Paula is pursued by an important new client Calvin and not just professionally.
Regisserat av:

8
My Mom, Greg’s Mom and Josh’s Sweet... 2015-11-30
My Mom, Greg’s...
2015-11-30
It is the holidays and Rebecca’s mom decides to come visit her in West Covina. Old habits die hard and Rebecca, eager to please her mom, embellishes some facts about her life, which all comes crashing down at a local holiday event. Meanwhile, Greg spends Christmas Eve with his mother and...
Regisserat av:

9
Going to the Beach with Josh and His... 2016-01-25
Going to the Beach...
2016-01-25
Rebecca rents a party bus to take Joshs friend group to the beach in order to impress them. On the trip, she learns more about her new friends than she expected and makes a surprising revelation herself.
Regisserat av:

10
Im Back at Camp with Josh! 2016-02-01
Im Back at Camp...
2016-02-01
When Rebecca finds out Josh is a volunteer at a camp for at-risk teens, she realizes it is the perfect opportunity to remind Josh about the amazing times they had together at camp. Meanwhile, Darryl tries to re-capture his youth by throwing a party, where Greg encounters someone from his past.
Regisserat av:

11
That Text Was Not Meant for Josh! 2016-02-08
That Text Was Not...
2016-02-08
Rebecca mistakenly sends Josh a text meant for Paula and takes drastic measures to ensure he never sees it. Meanwhile, Paula and her husband attempt to rekindle their relationship, only to be thwarted by Rebecca.
Regisserat av:

12
Josh and I Work on a Case! 2016-02-22
Josh and I Work on...
2016-02-22
After the texting debacle, Rebecca attempts to recover by pursuing a case she thinks will bring her closer to Josh. Darryl tries to reconcile his feelings for White Josh, while Greg is obsessed with trying to uncover Rebeccas real motives for taking on the case.
Regisserat av:

14
Josh is Going to Hawaii! 2016-03-07
Josh is Going to...
2016-03-07
Rebecca learns that Josh has conflicted feelings for her and Darryl wants to let everyone know about his newfound bisexuality. Meanwhile, Greg must figure out how to work alongside Heather post break-up.
Regisserat av:

15
Josh Has No Idea Where I Am! 2016-03-21
Josh Has No Idea...
2016-03-21
Rebecca gets stuck on a plane with her therapist, who takes her on a surprising journey. Meanwhile, in West Covina, Josh, Paula, Darryl and even a reluctant Greg come together to find Rebecca.
Regisserat av:

16
Joshs Sister is Getting Married! 2016-03-28
Joshs Sister is...
2016-03-28
Rebecca is determined to get her life on track so when Joshs sister asks her to be a bridesmaid, Rebecca decides to use her role to make things right with Valencia. Paula cannot accept Rebeccas new mindset while Greg, when helping someone else with their love dilemma, makes a realization of his own.
Regisserat av:

17
Why is Josh in a Bad Mood? 2016-04-11
Why is Josh in a...
2016-04-11
Rebecca is hiding a big secret from Paula, which begins to affect their friendship. Josh and Greg switch roles when Josh makes a discovery that angers him, while Greg is happier than he has been in a long time
Regisserat av:

18
Paula Needs to Get Over Josh! 2016-04-18
Paula Needs to Get...
2016-04-18
Rebeccas relationships are tested as she tries to navigate her friendship with Paula, her history with Josh and her connection with Greg. While at Joshs sister Jaymas wedding, Rebeccas world is turned upside down.
Regisserat av: