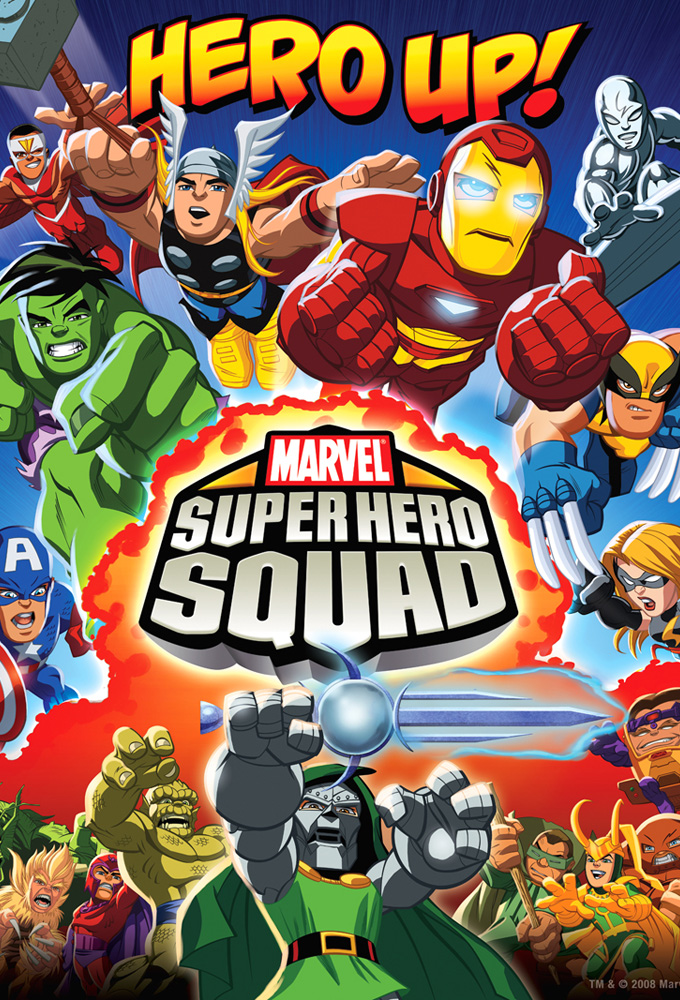 (2009)
Originaltitel: The Super Hero Squad Show
Skapad av:
Release: 2009-09-14
TV-bolag: Cartoon Network
Längd per avsnitt: 30 min min
Status: AVSLUTAD
Prior to the beginning of the series, the villainous Doctor Doom, in pursuit of universal domination, attempts to acquire the limitless reality-bending power of the Infinity Sword. He is stopped by Iron Man, but as a consequence of their battle, the sword is shattered into numerous fractals that rain down on Superhero City. As the series begins, Doctor Doom has forged alliances with just about every supervillain, forming the Lethal Legion in order to hunt down the scattered fractals,... (TheTVDB)
Animerat Barn

1
2
SÄSONG 1

1
And Lo... A Pilot Shall Come! 2009-09-14
And Lo... A Pilot...
2009-09-14
As the celebration to mark Villain Ville being closed off from Super Hero City turns into a disaster area, Iron Man, Falcon and Wolverine do battle with the Mole Man to retrieve an Infinity Fractal. Meanwhile, Ms. Marvel leads Hulk, Thor, Silver Surfer, and Storm in battle against Mole Mans...

2
To Err is Superhuman! 2009-09-14
To Err is...
2009-09-14
While in battle with Abomination and the Wrecking Crew, new Squaddie Reptil loses an Infinity Fractal. With both sides scrambling to retrieve it, Reptil, with Wolverines help, learns to face his fears and what it means to be a hero. Meanwhile, Hulk inadvertently joins a mariachi band.

5
Enter: Dormammu! 2009-10-10
Enter: Dormammu!
2009-10-10
With supernatural wackiness plaguing the city, the Super Hero Squad enlists the help of the Sorcerer Supreme of the Earth dimension, Doctor Strange. However, the good doctor seems to be off his rocker, babbling incoherently and summoning the Dread Dormammu to Super Hero City.

6
A Brat Walks Among Us! 2009-10-07
A Brat Walks Among...
2009-10-07
When the city is attacked, the squad investigates, only to find that a little girl named Brinny Bratten, who had a fractal stuck in her tiara, that gives her a large and terrifying power over reality. The Heroes For Hire are helping the Squad find her father, while Doom plans to use the chaos to...

7
Oh, Brother! 2010-01-02
Oh, Brother!
2010-01-02
Loki teams up with Doctor Doom in a plot to take over Asgard. Meanwhile, the latest Infinity Fractal causes Thor to lose his memory and its up to Iron Man and Hulk to help him remember who he is.

8
From the Atom...It Rises! 2009-10-20
From the Atom...It...
2009-10-20
A new villain named Scorpio shows up in superhero city. Nicky Fury disguises himself as a villain to infiltrate Dooms Headquarters to stop Dr. Doom from using a fractal to control a black hole.

9
Night in the Sanctorum! 2009-10-21
Night in the...
2009-10-21
When Falcon is presumed the cause of crashing The Helicarrier, The Squad is forced to relocate. Meanwhile, Enchantress and M.O.D.O.K. plan to attack Superhero City while the squad is tired from moving from place to place.

10
This Forest Green! 2009-10-22
This Forest Green!
2009-10-22
When MODOK and Abomination botched up another fractal retrieval mission, Doctor Doom pairs them up with Egghead in infiltrate the Helicarrier in micro-size. When Ant-Man is called in to help, it is a micro-sized, all-out battle for the fractal.

11
O, Captain, My Captain! 2009-10-23
O, Captain, My...
2009-10-23
When he is tired of all he can take with the Super Hero Squad, Wolverine joins up with the internation All-Captains Squad (consisting of Captain America, Captain Australia, Captain Brazil, Captain Britain, and Captain Lichtenstein) as Captain Canada where he helps them fight Plantman in the Amazon....

12
If This Be My Thanos! 2009-10-24
If This Be My...
2009-10-24
When the Skrulls start invading the city, the Super Hero Squad must team up with the Fantastic Four to stop them. Meanwhile, Thanos forms an alliance with Dr. Doom so he can steal an alien artifact from the Baxter Building.

13
Deadly is the Black Widows Bite! 2009-10-31
Deadly is the Black...
2009-10-31
After helping the Super Hero Squad in a battle against Screaming Mimi, Abomination and M.O.D.O.K., Black Widow joins the team. However, unknown to them, she is actually Mystique in disguise sent by Dr. Doom to steal the Infinity Fractals from the Vault.

15
Mental Organism Designed Only for... 2009-11-14
Mental Organism...
2009-11-14
Dr. Doom is fed up with the Super Hero Squad constantly foiling his plans, so Enchantress decides to help by casting a love spell on Thor to make him fall in love with her. However, the love spell accidentally hits Ms. Marvel instead, causing her to fall in love with M.O.D.O.K. Meanwhile, Skurge...

16
Invader from the Dark Dimension! 2009-11-21
Invader from the...
2009-11-21
When Baron Mordo possesses Iron Man turning him into the Iron Menace and escapes from the Dark Dimension, he plans to take over Super Hero City and Villainville. When Wolverine, Falcon, and Redwing end up under Baron Mordo/Iron Mans control, Hulk, Silver Surfer, and Thor must team up with Doctor...

17
Tales of Suspense! 2009-12-05
Tales of Suspense!
2009-12-05
War Machine teams up with Iron Man when Doctor Doom, Crimson Dynamo, and Melter band together in a plot to eliminate Iron Man. Meanwhile, Wolverine and Reptil face off against Abomination and M.O.D.O.K. in a game of golf.

18
Stranger from a Savage Land! 2009-12-12
Stranger from a...
2009-12-12
When a smilodon is brought to Super Hero City from the Savage Land, a mysterious jungle lord named Ka-Zar shows up stating that the smilodon is actually his companion Zabu. When the Super Hero Squad encounter Ka-Zar, they learn of his mission and help him rescue Zabu. Meanwhile, Doctor Doom sees...

20
Election of Evil! 2009-12-26
Election of Evil!
2009-12-26
The Mayor’s re-election bid goes awry when Egghead wins by a landslide (thanks to a little mass mind-control). But his reign at city hall makes life in Super Hero City a bureaucratic nightmare for heroes and villains alike. Wolverine and the Mayor are up against every hero and villain in a...

21
Hexed, Vexed and Perplexed! 2010-01-09
Hexed, Vexed and...
2010-01-09
Magneto is in town and he tricks his children Quicksilver and Scarlet Witch into helping in a sinister plot to steal the Infinity Fractals at the Vault for Doctor Doom. During the first fight, Falcon develops a crush on Scarlet Witch after she heals Redwing.

22
The Ice Melt Cometh! 2010-01-23
The Ice Melt Cometh!
2010-01-23
Doctor Doom sends his Team Toxic (consisting of Pyro, Trapster, and Zzzaz) out in a Fractal-retrieving activity at the north pole only to run afoul of Iron Man, Thor, and Wolverine. While Flatman and Reptil lecture about the polar ice caps, the world starts flooding after Trapster sets off their...

25
Last Exit Before Doomsday! 2010-02-13
Last Exit Before...
2010-02-13
Silver Surfers past as Galactus herald is revealed as he encounters another herald, Stardust. But Doctor Doom has plans of his own for Stardust and her big boss.