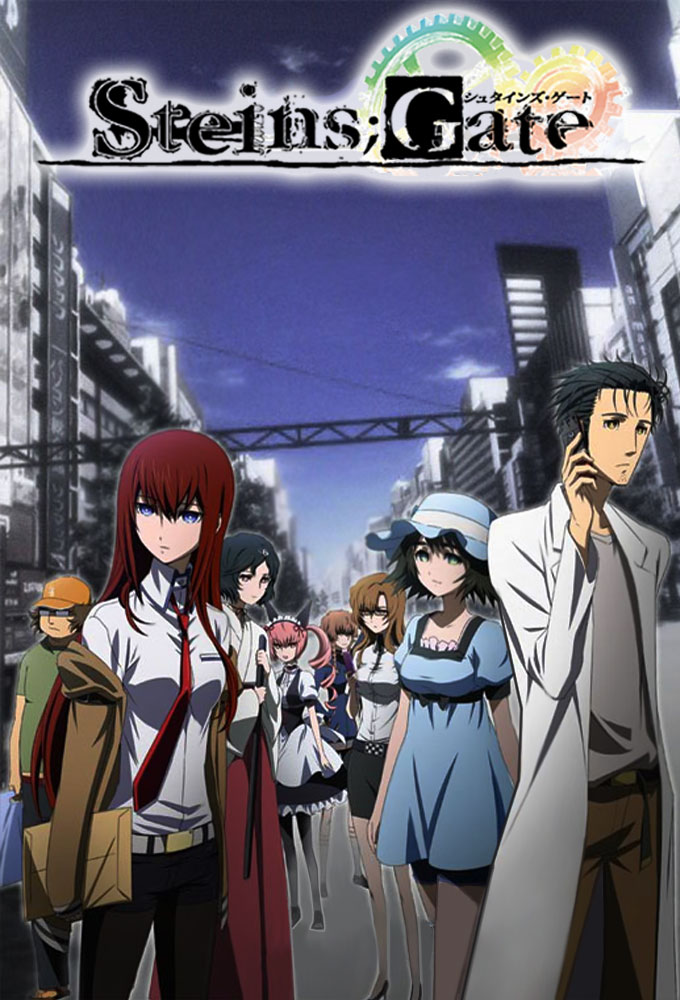 (2011)
Originaltitel: Shutainzu Gēto
Skapad av:
Release: 2011-04-05
TV-bolag: TV Tokyo
Längd per avsnitt: 25 min min
Status: AVSLUTAD
Steins;Gate is about a group of friends who have customized their microwave into a device that can send text messages to the past. As they perform different experiments, an organization named SERN who has been doing their own research on time travel tracks them down and now the characters have to find a way to avoid being captured by them. (TheTVDB)
Animerat Science-Fiction Thriller

SPECIAL
1
SÄSONG 1

1
Prologue of the Beginning and Ending 2011-04-05
Prologue of the...
2011-04-05
Self-proclaimed mad scientist, Rintarō Okabe, goes to a seminar on time travel with his friend, Mayuri Shiina. Whilst there, he meets a girl named Kurisu Makise who explicitly states that he had met her 15 minutes ago, despite having never met her before. Later on, Rintarō hears a scream and...

2
Paranoia of Time Leaps 2011-04-12
Paranoia of Time...
2011-04-12
Rintarō is surprised that Kurisu is alive, before being humiliated by her during a lecture concerning time travel. After getting some provisions from crossdresser Ruka Urushibara and meeting Suzuha Amane, who gets hired to work part time in the electronics shop below his apartment, Rintarō...

3
Paranoia of Parallel Process 2011-04-19
Paranoia of...
2011-04-19
Rintarō agrees to let Kurisu look at the mobile microwave on the condition she become a lab member. They discover that Hashida was using the microwave at the time Rintarō sent his text about Kurisus stabbing. Despite the microwave causing a large electrical discharge when Mayuri opens it in the...

4
Rendezvous of Abstract Fluctuation 2011-04-26
Rendezvous of...
2011-04-26
With further information encrypted in a code that Hashida cant decifer, Rintarō learns from John Titor that he needs the IBN 5100 computer Moeka was looking for to decode it. Whilst doing his laundry, Rintarō runs into Kurisu, who is still in denial about a time machine existing. After Mayuri...

5
Rendezvous of Electrical Charge Conflict 2011-05-03
Rendezvous of...
2011-05-03
As Rintarō and Kurisu arrive home with the IBN 5100, Suzuha seems to be shocked when she sees Kurisu. As Rintarō gathers some needed parts, he runs into Suzuha again, who warns her to be cautious of Kurisu and acts strangely when a helicopter passes by. After Hashida gets the IBN 5100 working,...

6
Butterfly Effects Divergence 2011-05-10
Butterfly Effects...
2011-05-10
The lab members discuss how to perfect the Mobile Microwave, dubbing messages sent to the past as D-Mails. Further experimenting reveals the various rules concerning D-Mails; being that it can only be sent during a certain time of the day, long messages are split into several smaller mails, and the...

7
Divergence Singularity 2011-05-17
Divergence...
2011-05-17
After some improvements are made to the Mobile Microwave, Rintarō decides to experiment changing the past by sending winning lottery numbers to the past. After sending the text, the past is changed to where Ruka has bought a lottery ticket, but Rintarō didnt perform the experiment, with only...

9
Homeostasis of Illusions 2011-05-31
Homeostasis of...
2011-05-31
Maid café waitress Rumiho Akiha, a.k.a. Feyris Nyan Nyan, learns about the Mobile Microwave as Rintarō discusses it with Hashida, becoming very interested in it. Later, Rintarō discovers that the IBN-5100 has gone missing, as if they never found it in the first place, most likely as a result of...

10
Homeostasis of Complements 2011-06-07
Homeostasis of...
2011-06-07
Rintarō realises the D-Mail Rumiho sent prevented moe culture from being introduced into Akihabara. As Rintarō wonders why the relationships between his friends hasnt been affected, he comes to realise that Rukas gender had in fact been changed. Afterwards, Rintarō talks with Suzuha, who...

11
Dogma of Space-Time Boundary 2011-06-14
Dogma of Space-Time...
2011-06-14
Rintarō discovers that a television in the electronics shop below the lab is the key to the time slot in which D-Mails can be sent. Kurisu then theorises that it might be possible to send memories back in time in the same manner as D-Mails, effectively allowing people to leap to the past. As...

12
Dogma in Ergosphere 2011-06-21
Dogma in Ergosphere
2011-06-21
With the ability to utilise the LHC, Kurisu completes her time leap machine. However, Rintarō, still tortured by the texts he has received, decides against performing an experiment, instead suggesting they announce it to the public. As the lab members decide to have a party, Kurisu comes into...

13
Necrosis of Metaphysical 2011-06-28
Necrosis of...
2011-06-28
Right after Moeka kills Mayuri, Suzuha rushes in the lab and creates a distraction, allowing Kurisu to use the time leap machine to send Rintarō back in time to 5 p.m. of the same day. Rintarō drives everyone away from the lab, but wastes most of his time searching for Mayuri. By the time they...

14
Necrosis of Physical 2011-07-05
Necrosis of Physical
2011-07-05
Rintarō makes several time leaps, but no matter what, Mayuri always ends up dying in some way. In one of those leaps, Rintarō calls out Moeka and holds her at gunpoint, making her reveal that SERN have targeted the lab due to the creation of the time machine and their plan to publicly announce...

15
Missing Link Necrosis 2011-07-12
Missing Link...
2011-07-12
Suzuha explains how SERN was able to build a time machine and use it to rule the world in 2036. She explains she plans to travel to 1975 to acquire an IBN-5100, but soon discovers her time machine has broken down as a result of the storm on the night Rintarō stopped her from leaving. Rintarō...

16
Sacrificial Necrosis 2011-07-19
Sacrificial Necrosis
2011-07-19
Unable to get much information about the badge makers client, Rintarō decides to leap back in time to confront the client in question, only to find it was Hashida, who wanted to make a fake badge to cheer Suzuha up. Hashida then mentions that Suzuhas time machine is only able to travel backwards...

17
Made in Complex 2011-07-26
Made in Complex
2011-07-26
Despite the change in divergence, Mayuris death still takes place, albeit a day later than in previous timelines. Rintarō asks for Kurisus help, who theorises that, since negating Rintarōs D-Mail about Suzuha delayed the attack, undoing the effects of the other D-Mails could bring them back to a...

18
Androgynous Fractale 2011-08-02
Androgynous Fractale
2011-08-02
Rintarō tells Ruka about how she used to be a man and urges her to reverse the D-Mail responsible in order to change Mayuris fate. While she initially disbelieves him, ultimately she agrees, on the condition that Rintarō takes her on a date. Despite Kurisu and Hashidas advice on dating, Rukako...

19
Infinite Chain of Apoptosis 2011-08-09
Infinite Chain of...
2011-08-09
As Kurisu offers to look after Mayuri at a doujin convention, Rintarō heads to Moekas address, only to learn that she had killed herself. After finding out the deadline of Mayuris death in this world line, Rintarō time leaps to before Moeka killed herself, finding her in a nervous wreck having...

21
Paradox Meltdown 2011-08-23
Paradox Meltdown
2011-08-23
Not wanting to move to a World Line where Kurisu dies, Rintarō decides against the hacking. As he accompanies Mayuri to a Comic Market, he tries to think of a way he can save her without changing World Lines, too afraid to tell Kurisu the reason behind his change of plans. As a car appears during...

22
Being Meltdown 2011-08-30
Being Meltdown
2011-08-30
As Rintarō and Kurisu hide out from the rain, she explains how she recalls her stabbing from dreams, as well as Rintarōs various attempts at saving Mayuri. When Kurisu tells Rintarō that he should save Mayuri over her, he cant accept it and runs off. As Rintarō attempts to time leap again,...

24
Achievement Point 2011-09-13
Achievement Point
2011-09-13
Picking up a sabre toy in order to use its liquid as a substitute for Kurisus blood, Rintaro and Suzuha return to the day of Kurisus death. First, he makes sure to obtain a metal toy Mayuri previously found in order to prevent Nakabachi to successfully bring Kurisus theory to Russia. As he prepares...