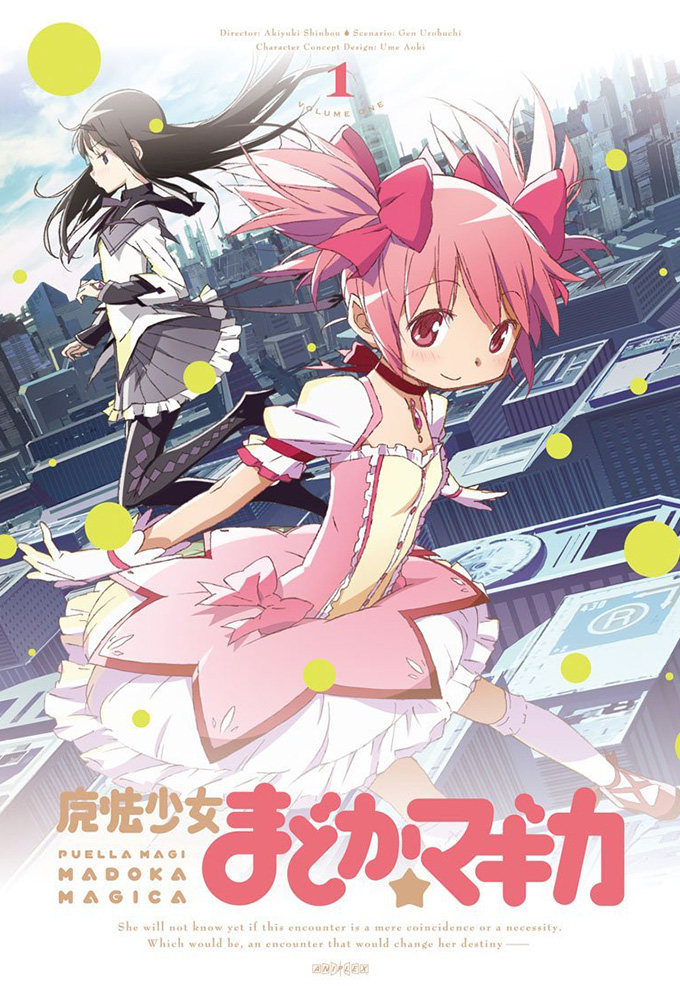 (2011)
Originaltitel: Mahō Shōjo Madoka Magika
Skapad av:
Release: 2011-01-06
TV-bolag: Tokyo Broadcasting System
Längd per avsnitt: 25 min min
Status: AVSLUTAD
There exist familiars who have the power to grant one wish to a chosen girl. However, that girl must then become a Puella Magi, a girl with magical powers, and fight against witches, evil creatures born from curses that are responsible for murders and suicides. A schoolgirl named Madoka Kaname and her friend Sayaka Miki are approached by a familiar named Kyubey and Puella Magi named Mami Tomoe with offers of becoming magical girls. Another Peulla Magi named Homura Akemi tries to... (TheTVDB)
Animerat Drama Fantasy Skräck

SPECIAL
1
SÄSONG 1

1
I Met Her in a Dream... 2011-01-06
I Met Her in a...
2011-01-06
Fourteen-year-old Madoka Kaname has a dream in which a dark-haired girl is struggling against an evil force. As Madoka wakes up and goes to school that morning, the very same girl, Homura Akemi, enrolls in her class. Even stranger, Homura seems to know Madoka and later confronts her in the hallway...
Regisserat av:

2
That Sounds Wonderful 2011-01-13
That Sounds...
2011-01-13
Mami and Kyubey explain to Madoka and Sayaka that Kyubey has the power to grant wishes, but in exchange, those who make wishes must become Puella Magi to fight witches, who are born from curses. Mami offers to take Madoka and Sayaka with her on a witch hunt to help each decide if there were a wish...
Regisserat av:

3
Im Not Afraid Anymore 2011-01-20
Im Not Afraid...
2011-01-20
Sayaka visits an injured boy named Kyōsuke Kamijō, who was a violin player she admired when she was little. After another witch hunt, Mami tells Madoka and Sayaka that she had been involved in a traffic accident and didnt have time to think about her wish. She also lets Sayaka know about the...
Regisserat av:

4
There are Miracles and Magic 2011-01-27
There are Miracles...
2011-01-27
As Sayaka continues to be concerned about Kyōsuke, Madoka, still in despair over the death of Mami, admits shes too scared to become a Puella Magi, so Kyubey decides to let her be. Madoka is later approached by Homura, who tells her that Mami, along with other Puella Magi she has seen die during...
Regisserat av:

5
Theres No Way I Would Regret It 2011-02-03
Theres No Way I...
2011-02-03
Both Madoka and Homura show concern about Sayakas decision to become a Puella Magi. Sayaka visits Kyōsuke and feels happy that he is finally able to play his violin once again. Meanwhile, Madoka asks Homura to become allies with Sayaka, not wanting her to suffer the same fate as Mami, though...
Regisserat av:

6
This Just Isnt Right 2011-02-10
This Just Isnt Right
2011-02-10
Homura knocks Sayaka unconscious and gets Kyōko to leave, before reiterating to Madoka that she not get involved. Kyubey mentions to Sakuya about the potential Madoka has to become a Puella Magi, although she insists that she doesnt want her to get involved. Homura later confronts Kyōko and...
Regisserat av:

7
Can You Face Your True Feelings? 2011-02-18
Can You Face Your...
2011-02-18
Sayaka gets angry at Kyubey for keeping the truth from her, but he keeps her in check by making her feel the pain she wouldve felt while fighting Kyōko if not for the Soul Gem. The next day, Madoka asks Homura about the meaning behind Kyubeys actions and why she never told them. Meanwhile, Kyōko...
Regisserat av:

8
Im Such a Fool 2011-02-25
Im Such a Fool
2011-02-25
Sayaka defeats the witch, but refuses to take the Grief Seed it produces. Madoka tries to reason with Sayaka, but she just berates her, blaming her for her state, before running off. Meanwhile, Homura and Kyōko discuss Walpurgis Night when Kyubey appears, mentioning that something bad will happen...
Regisserat av:

9
I Cant Forgive That Kind of Thing 2011-03-04
I Cant Forgive That...
2011-03-04
As a witch appears before Kyōko, Homura appears and uses her time manipulation to help Kyōko escape, bringing Sayakas body to Madoka. Homura reveals that the witch was actually Sayaka, whose Soul Gem had transformed into a Grief Seed as a result of becoming too tainted. Later that night, while...
Regisserat av:

10
I Cant Depend on Anyone Anymore 2011-03-11
I Cant Depend on...
2011-03-11
The episode looks at an alternate timeline in which Homura is a shy transfer student who makes friends with the cheerful Madoka. Lacking confidence in herself, Homura is attacked by a witch but is rescued by Madoka and Mami, both of whom are partners as Puella Magi. When both Madoka and Mami are...
Regisserat av:

11
The Last Path Left 2011-04-21
The Last Path Left
2011-04-21
Kyubey reveals to Homura that the reason Madoka has the potential to become such a powerful witch is because of Homuras constant trips through time. After Sayakas funeral, Kyubey shows Madoka the history of the Puella Magi, and how it has shaped civilization, causing Madoka to become extremely...
Regisserat av:

12
My Best Friend 2011-04-21
My Best Friend
2011-04-21
Madoka makes the decision to become a Puella Magi, wishing to stop all witches from the past, present and future, to erase them before they are born by her own hand, a wish made possible due to the massive power inside her. As she makes the transformation, her conscious is greeted by Mami and...
Regisserat av: