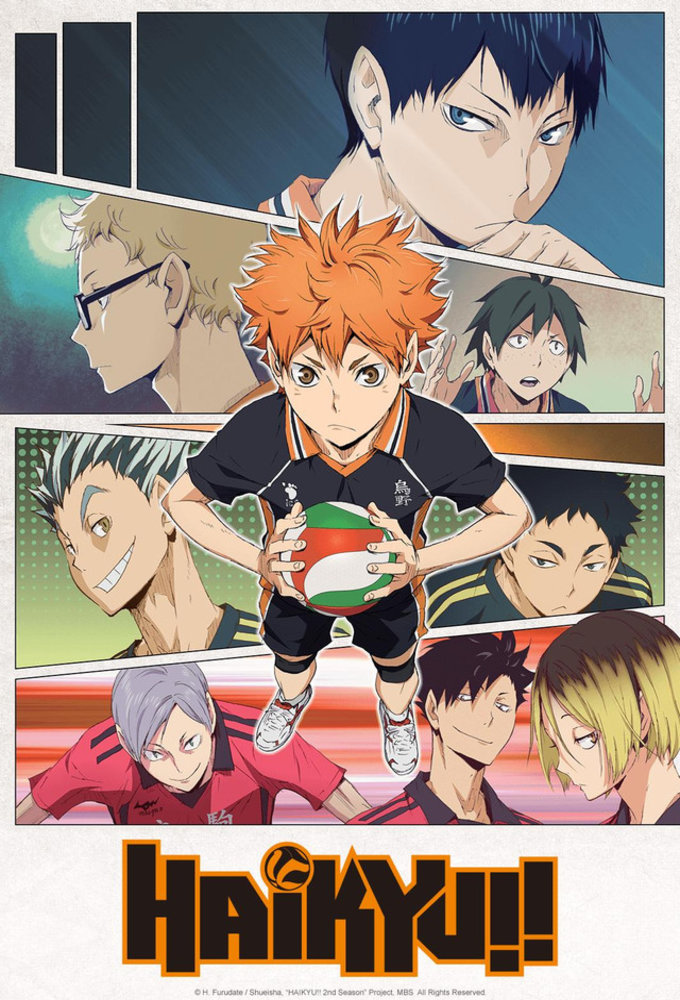 (2014)
Originaltitel: Haikyū!!
Skapad av:
Release: 2014-04-06
TV-bolag: MBS
Längd per avsnitt: 25 min min
Status: AVSLUTAD
A chance event triggered Shouyou Hinatas love for volleyball. His club had no members, but somehow persevered and finally made it into its very first and final regular match of middle school, where it was steamrolled by Tobio Kageyama, a superstar player known as King of the Court. Vowing revenge, Hinata applied to the Karasuno High School volleyball club... only to come face-to-face with his hated rival, Kageyama! A tale of hot-blooded youth and volleyball from the pen of Haruichi... (TheTVDB)
Animerat Komedi Sport

SPECIAL
1
2
3
SÄSONG 1

1
The End & the Beginning 2014-04-06
The End & the...
2014-04-06
Young ace spiker Shoyou Hinata participates in his first ever volleyball match in junior high, but his first match is against Tobio Kageyama, a man known as the king of the court. Kageyama is recognized nationally as one of the best setters, but he pushes his teammates harder than any of them think...

5
A Cowards Anxiety 2014-05-04
A Cowards Anxiety
2014-05-04
Kageyama and Hinata begin to get in sync. As Kageyamas sets start hitting Hinatas hands every time, Tsukishima is forced to change his tactics at blocking. This frees Ryuunosuke up on the other side, and the team of Kageyama, Hinata, and Ryuunosuke is able to rally and win the 3-on-3 first year...

6
An Interesting Team 2014-05-11
An Interesting Team
2014-05-11
Karasuno goes with the team of Daichi Sawamura, Tanaka Ryuunosuke, Tobio Kageyama, Shouyou Hinata, Kei Tsukishima, and Tadashi Yamaguchi for their practice match against Aoba Johsai High. Before the match even begins Kageyama runs into his old teammate, Kindaichi, who continually calls him king of...

7
Versus the Great King 2014-05-18
Versus the Great...
2014-05-18
Oikawa returns for Aoba Johsai. He is revealed to be their captain and their true setter. He also is Kageyamas original senpai. When Oikawa comes up to serve, he starts hitting perfect serves to Tsukishima, resulting in an ace every time. It isnt until Sawamura changes their formation that Karasuno...

8
He Who Is Called Ace 2014-05-25
He Who Is Called Ace
2014-05-25
Yu Nishinoya returns and helps the team start getting better with receiving the ball. However Yu refuses to play in any game until theri ace, Asahi Azumane retuns. Meanwhile advisor Ittetsu Takeda continues to pursue Keishin Ukai as the next coach of Karasuno High. Keishin tells him he isnt like...

9
A Toss to the Ace 2014-06-01
A Toss to the Ace
2014-06-01
Keishin Ukai agrees to become the next coach of Karasuno after he learns of the upcoming practice match, but only until the practice match is finished. To learn the strengths of each of the current players, he arranges an exhibition for them against his stores volleyball association, a group that...

10
Yearning 2014-06-08
Yearning
2014-06-08
The practice match between Karasuno and the Neighborhood Association continues with Karasuno down 1-0. Ukai manages to see firsthand how Hinata can be the ultimate decoy and learns how quickly Kageyama and Hinata have grown together as a duo. He also witnesses firsthand how Hinatas speed is...

11
Decision 2014-06-15
Decision
2014-06-15
Karasuno heads off to training camp. During a jog on one of the days Hinata gets lost and runs into a volleyball player in a red jersey named Kenma. Before Kenma reveals which team he plays for one of his teammates shows up and leads him off to a practice match. After hesitating to decide a...

12
The Neko-Karasu Reunion 2014-06-22
The Neko-Karasu...
2014-06-22
Nekoma and Karasuno begin their match with Kageyama and Hinata connecting on a quick attack that gives Karasuno the 1-0 lead. Nekoma realizes theyre up against a genius setter, so they decide to start marking Hinata. Hinatas blocker gets used to his speed and feints and begins to start blocking his...

13
Rival 2014-06-29
Rival
2014-06-29
Nekoma and Karasuno play the second set to an epic 25-23 showdown, but in the end Karasuno falls just short. However the two schools reform a rivalry that is better than time could imagine. The two come to realize they each have similar personalities on their teams, and they each have first years...

14
Formidable Opponents 2014-07-06
Formidable Opponents
2014-07-06
The bracket for the Inter-High is announced. Karasuno has its final practices and works on back-end spikes and signals. The lost Karasuno flag that says Fly is revealed. Hinata and Kageyama reveal theyve had a race every morning to the gym since theyve been teammates. Kageyama currently leads...

15
Revival 2014-07-13
Revival
2014-07-13
Karasuno arrives for their first matches on both the mens and womens sides of the tourney. On the mens side people talk about how Karasuno did well in the past bu they were now crashed ravens. On the womens side they contemplate how they should have practiced more. Aoba Johsai watches from the...

16
Winners and Losers 2014-07-20
Winners and Losers
2014-07-20
Karasunos boys team wins set one 25-12, but the Captains old friend delivers one phrase that makes Karasuno stay serious for set 2. Kageyama gets five quick service aces, and Karasunos boys team wins set two 25-14. The girls team isnt so lucky as they fall in two sets and wonder what they couldve...

17
The Iron Wall 2014-07-27
The Iron Wall
2014-07-27
Dateko and Karasuno battle it out in the second round. Datekos giant reveals he is targeting Hinata, forcing Kageyama to reveal the super quick attack. The super quick attack seems to give Karasuno a slight advantage, allowing them to take an 18-16 lead. When the giant targets Hinata on a super...

18
Guarding Your Back 2014-08-03
Guarding Your Back
2014-08-03
Karasuno manages to get on a roll in set 1 and steals the game 25-21. For set two they perform a double rotation to get Hinata away from the Giant #7. While this frees up Hinata for more quick attacks, it also means the matches result will rely heavily on Azumanes ability to blast through the Iron...

19
Coaches 2014-08-10
Coaches
2014-08-10
Karasuno observes Aoba Johsais second match and decide to focus on attacking Noya, especially after a local tv interview focuses solely on Noyas skills. The match takes place the next day, and Karasuno seems to be more motivated than ever. Noya does a quick setter dump to give Aoba Johsai a 1-0...

20
Oikawa Toru Is Not a Genius 2014-08-17
Oikawa Toru Is Not...
2014-08-17
Oikawa and Kageyama continue to match up head-to-head a s they try to prove whose the superior setter. Their junior high days competing against each other are shown, and when Aoba Johsai begins to predict Kageyamas moves a shocking move is made as Sugawara is subbed in for Karasuno. Will this be a...

21
Senpais True Abilities 2014-08-24
Senpais True...
2014-08-24
Sugawara subs in for Kageyama, sealing the first set for Aoba Johsai. Kageyama is shocked as he watches the real ability of Sugawara in setting. Sugawara gives his best to set. Aoba Johsai is shocked when Hinata didnt speak or call for the sets that Aoba Johsai knows. Karasuno takes the lead in set...

22
Evolution 2014-08-31
Evolution
2014-08-31
After being subbed back in Kageyama begins to try to communicate with each of his teammates. He begins to learn where the best setting point is for each of them, and Tsukishima comes up with a new attack that proves Karasuno can be a threat from all fronts.

23
The Point that Changes the Momentum 2014-09-07
The Point that...
2014-09-07
Aoba Johsai begins to pull away in set 3, forcing Coach Ukai to make some drastic decisions. Yamaguchi is subbed in as an ace server, but the pressure proves to be too much to overcome. A service error occurs, but the error allows Karasuno to calm down and climb back within two.

24
Removing The Solitary King 2014-09-14
Removing The...
2014-09-14
Kageyama begins to match Toru point for point. The teams become dead even at 25 a piece. Long sets begin to drain both teams, and Toru acknowledges that Kageyama has realized what teamwork is all about and is no longer the solitary king. The game winning points are shown.

25
The Third Day 2014-09-21
The Third Day
2014-09-21
After suffering a heartbreaking loss to Aoba Johsai, the third years must decide if they will retire or participate in the spring tournament. Kageyama and Hinata vent their frustration on the court after their practice has been cancelled. The winner of the fall tournament is revealed, and Karasuno...