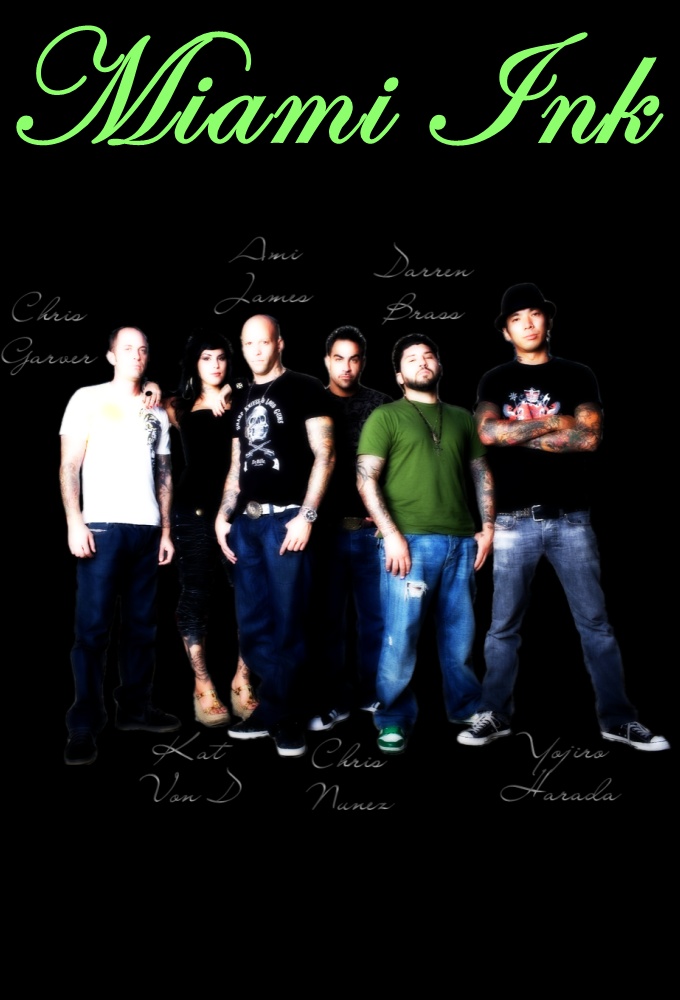 (2005)
Originaltitel: Miami Ink
Skapad av:
Release: 2005-07-19
TV-bolag: TLC
Längd per avsnitt: 45 min min
Status: AVSLUTAD
Miami INK takes viewers into the inside world of tattooing. From the shop, to the artists, and their clients. Get an in depth look at the emotional stories behind the tattoos and the meaning people attach to them. People from all walks of life come for tattoos, from punk rock, to South Beach socialites, to celebrities. The series follows four master artists, Ami James, the tough guy of the bunch, Chris Garver, Darren Brass, Chris Nunez, and the apprentice Yojiro Harada. Ami, Darren,... (TheTVDB)
Reality

SPECIAL
1
2
3
4
SÄSONG 1

1
Five Friends 2005-07-19
Five Friends
2005-07-19
The friends reunite to turn what was once just a dream into a reality. As Ami and three world-class tattoo artists open up a tattoo shop in Miamis South Beach called Miami Ink, the four friends and apprentice Yoji, hope to build a thriving business.

2
Never Forget 2005-07-26
Never Forget
2005-07-26
As the business grows, the guys of Miami Ink struggle with the pressure of balancing their personal life and work

3
In Memory Of... 2005-08-02
In Memory Of...
2005-08-02
Ami and crew deal with changes and transformations in their lives and relationships, including the wedding of Yoji to his fiance Bridgette when they get married in a beautiful ceremony on the beach.

4
Growing Up 2005-08-09
Growing Up
2005-08-09
While the gang adjusts to the responsibility of owning their own business, a list of celebrity clientèle wait months for their turn under the needle with the masters.

5
The Apprentice 2005-08-16
The Apprentice
2005-08-16
Yoji slowly learns the ropes, but still has a way to go before he can tattoo. Also: a former member of rock band Skid Row gets tattooed with his kids names.

9
Kats in the Groove 2005-09-20
Kats in the Groove
2005-09-20
After last weeks episode where Kat was brought in to help out, shes now settled in and having fun doing some great artwork. Kat tattoos the Virgin Mary on Darrens wife, and some family members come to visit the shop.

10
Finding Balance 2005-09-27
Finding Balance
2005-09-27
While exercising to get into better physical shape, Ami revives an old back injury. Meanwhile, the gang are hesitant to let Yoji handle a solo tattoo job on a woman.

11
More Money, More Problems 2006-01-10
More Money, More...
2006-01-10
Trouble and confusion are brewing with the artists. They learn that as you get more money, you also get more problems. Ami buys his dream car and Darren puts his life and career on the line by drinking too much.

16
While Amis Away 2006-02-28
While Amis Away
2006-02-28
Kat stays on and helps out while Ami and Chris are vacationing in Hawaii. Now under the temporary management of Nunez, the shop is kept busy doing an intricate Alphonse Mucha design for a breast-cancer survivor and a special tattoo for custom-motorcycle builder Billy Lane. Meanwhile, apprentice...

17
Rock n Roll All Night 2006-03-07
Rock n Roll All...
2006-03-07
Garver works on a guardian angel design while Ami finishes a Hindu-inspired piece and then undertakes a Hawaiian-themed design. However, with so much work to do, the long hours are getting to everyone.

18
The Ink That Binds 2006-03-14
The Ink That Binds
2006-03-14
Darren does an inspirational tattoo to honor a mans uncle, while Garver does one for a woman who has struggled for years to overcome an eating disorder. Yojis long work hours are affecting his family life, and the gang offers to look after his daughter while he and his wife see a family therapist....

19
Goodbye Freedom 2006-04-04
Goodbye Freedom
2006-04-04
Darrens wife finally moves to Miami, forcing him to give up his notorious partying. Meanwhile, Yoji and Ami participate in a celebrity ping-pong tournament to benefit underprivileged kids. Nunez gives a young girl the design of her dreams, then helps another with an image to keep her mothers...

20
Made in Japan 2006-04-11
Made in Japan
2006-04-11
Against Amis wishes, Yoji gets a Mohawk haircut and adds a tattoo to his head. But Ami cant complain too much when apprentice Yoji finally gets his first paying client. Ami does a rosary design for a girl in memory of her grandfather, Darren makes a design to remind a rock musician that you only...