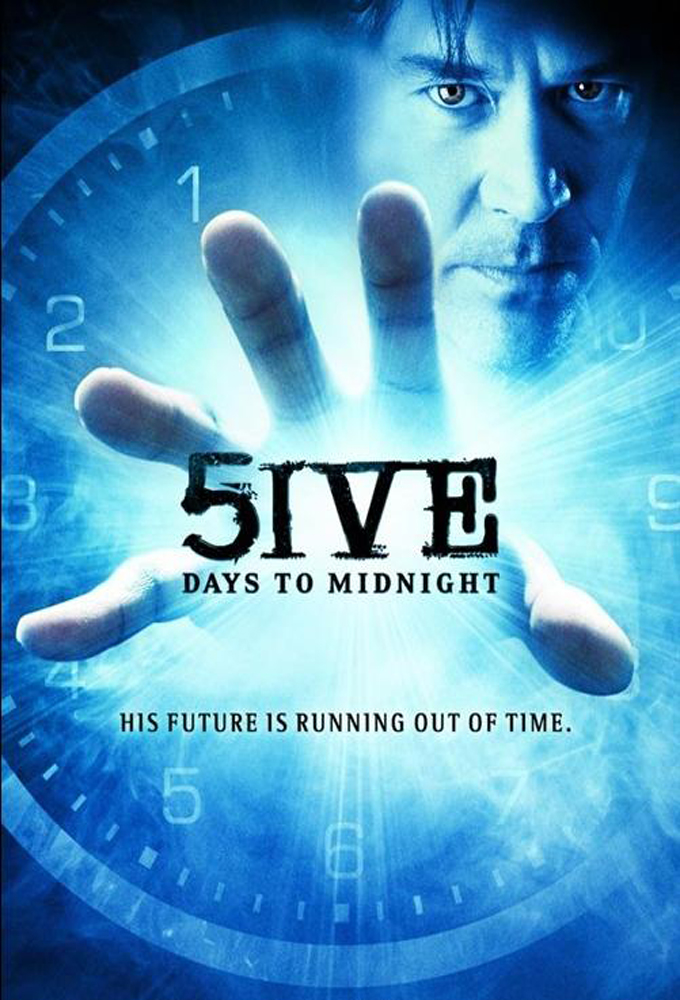 (2004)
Originaltitel: 5ive Days to Midnight
Skapad av:
Release: 2004-06-07
TV-bolag: SciFi
Längd per avsnitt: 45 min min
Status: AVSLUTAD
While visiting the graveyard of his beloved wife with his daughter Jesse, the physics professor John T. Neumeyer finds a case with a police dossier relating his death in five days. He initially believes it is a sick prank from the brilliant but deranged physics student Carl Axelrod, but when a series of events related in the documents occur, he realizes that the file has been sent from the future. With the support of Detective Irwin Sikorski, whose name is indicated in the file as in... (TheTVDB)
Drama Mini-series

1
SÄSONG 1

1
Day One 2004-06-07
Day One
2004-06-07
J.T. Neumeyer sits at his wifes grave with his daughter, Jesse, on the anniversary of her death. Out of nowhere, a mysterious briefcase appears. Inside, the details and newspaper clippings of J.Ts murder, to happen at the stroke of midnight in five days. But things get much more complicated when...
Regisserat av:

2
Day Two 2004-06-07
Day Two
2004-06-07
As his death date comes closer, J.T. discovers more and more people that may have motives to kill him. Roy Bremmer has finally hunted down J.T, and threatens to kill him and Jessie if he doesnt hand over Claudia. Brad has become bankrupt and is desperate for some money. The mysterious briefcase of...
Regisserat av:

3
Day Three 2004-06-08
Day Three
2004-06-08
J.T. is determined to save his life, and attempts to erase every suspects motives for killing him. To stop Carl, he has him locked away in the psychiatric ward, unable to escape. He allows Brad to collect the briefcase on Monday, which will bring Brad the money he desperately needs, and he...
Regisserat av:

4
Day Four 2004-06-09
Day Four
2004-06-09
The closer the day of his death comes, the more J.T. gives in to his destiny. Only as Jesse finds his testament, he can convince him not to give up yet. J.T. has an idea how to stop his potential murderer from his plan: Eliminate their motives ! He´s trying to bribe Roy Bremmer with the valuable...
Regisserat av:

5
Day Five 2004-06-10
Day Five
2004-06-10
J.T.´s preparations seem to be useless. Carl and Brad are both hunting him; one because he is convinced, that it would destroy the universe, if J.T. survives, the other because of greed. The biggest problem is, that Roy Bremmer has abducted Claudia and Jesse, to get the documents back that Claudia...
Regisserat av: