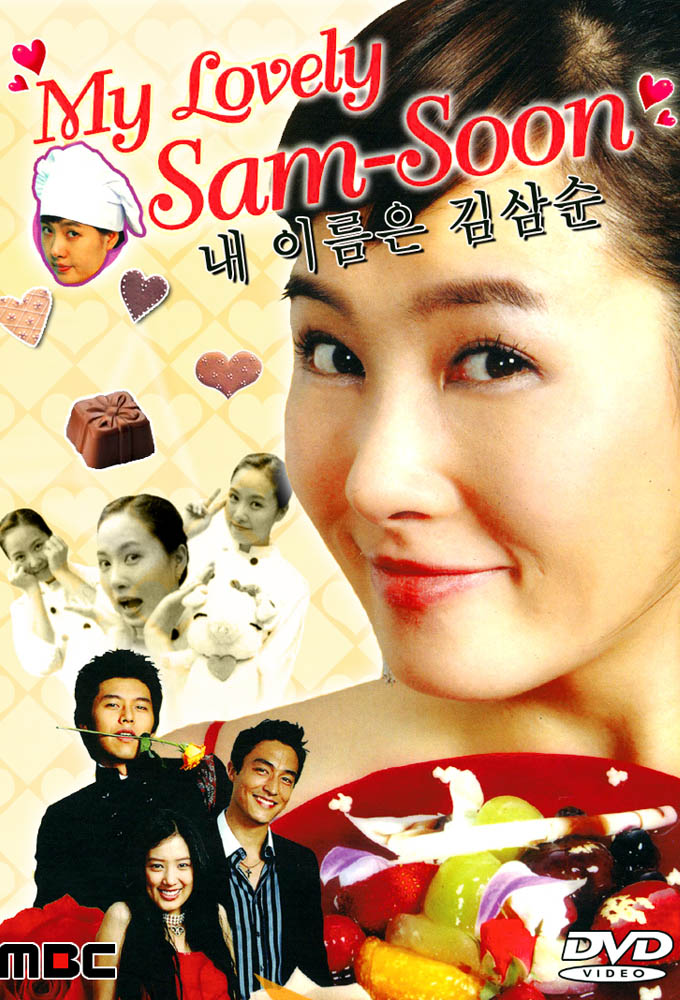 (2005)
Originaltitel: Nae ireumeun Kim Sam-soon
Skapad av:
Release: 2005-06-01
TV-bolag: MBC
Längd per avsnitt: 60 min min
Status: AVSLUTAD
Kim Sam Soon is a baker who has a talent in making pastries and cakes. On Christmas Eve, she caught her boyfriend, Min Hyun Woo, cheating on her and breaks up. On that same night, she accidentally went into the mens restroom and met Hyun Jin Hun. By sheer coincidence, Jin Hun needs a baker for his restaurant Bon Appetit and Sam Soon is unemployed. Sam Soon is hired as the restaurants chief baker and the two fights like cat and dog. (TheTVDB)
Komedi Miniserie Kärlek

1
SÄSONG 1

1
Life is like Bonbon au Chocolat, a box... 2005-06-01
Life is like Bonbon...
2005-06-01
On Christmas Eve, Sam-soon enters into a hotel looking for her cheating boyfriend Hyeon-woo. She’s been suspicious about his behavior and she sees him going up to the room with a beautiful woman.

9
Are my truthful feelings a Joke? 2005-06-29
Are my truthful...
2005-06-29
Mrs. Na who wants to separate Hee-jin from Jin-heon decides to use Sam-soon. Jin-heon is surprised to see Sam-soon coming to his brother’s memorial service with his mother. Jin-heon claims that he broke up with Sam-soon, but his mother walks away leaving Sam-soon with him.

10
My name is Kim Hee Jin 2005-06-30
My name is Kim Hee...
2005-06-30
On her way out from the restaurant, Jin-heon realizes that the bakery seems empty and lifeless without Sam-soon. He smiles as if he’s just thought of a good idea to bring her back. He offers her an incredible raise to change her mind.

14
The basics of dating 2005-07-14
The basics of dating
2005-07-14
Hee-jin tries to keep her cool, but she’s very upset. She starts hitting Jin-heon out of frustration. Jin-heon just lets her hit him. He hugs her tightly and sheds tears. Meanwhile, Mrs. Na finds out that originally Jin-heon paid Sam-soon to pretend to be her girlfriend. Angry at him, she blames...

15
The old fashioned rules of falling in... 2005-07-20
The old fashioned...
2005-07-20
Sam-soon is confused when she sees Jin-heon and Hee-jin getting out of the elevator together. Jin-heon asks her not to misunderstand him, but she tells him that she still feels that three people are involved in their relationship. Sam-soon goes to Hee-jin’s house when she hears that Hee-jin is...