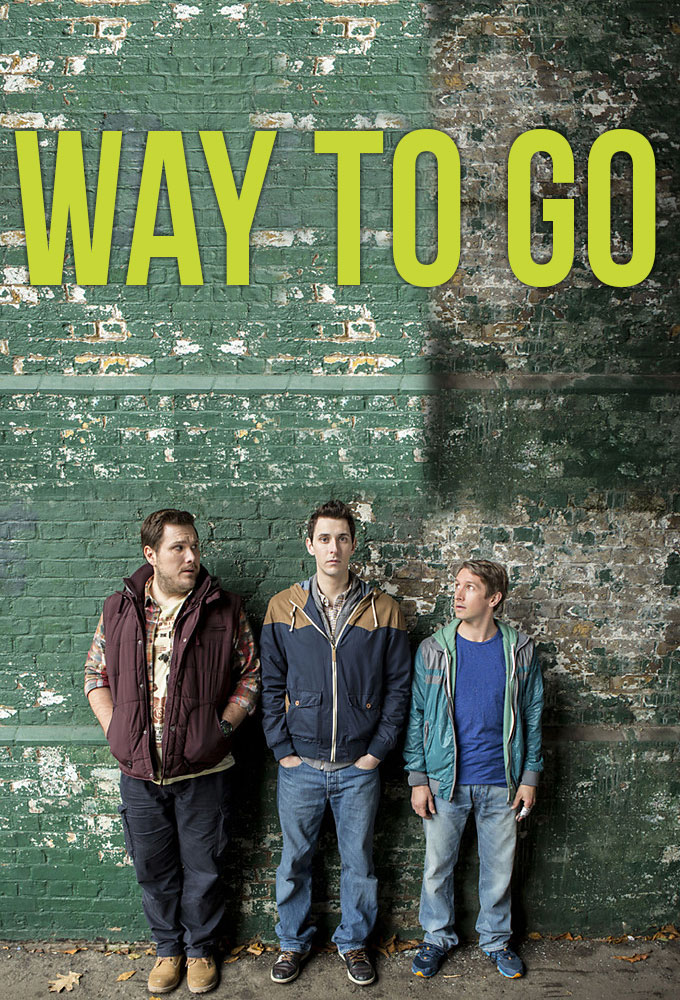 (2013)
Originaltitel: Way to Go
Skapad av:
Release: 2013-01-17
TV-bolag: BBC Three
Längd per avsnitt: 30 min min
Status: AVSLUTAD
A black comedy about three ordinary guys who find themselves, forced by an extraordinary set of circumstances, into setting up an assisted-suicide business. Brothers Scott and Joey, plus their mate Cozzo, are unlucky in both life and love. They do their best to better their lot, but unintentionally just end up providing a service in assisting suicides... After Scott is moved by a terminally ill neighbours request to die - and at the same time faced with a predatory female employer,... (TheTVDB)
Komedi Drama

1
SÄSONG 1

1
The Beginning of the End 2013-01-17
The Beginning of...
2013-01-17
Scott, fresh off being dumped by his girlfriend, helps prevent his brother Joey from being killed by money-lenders by reluctantly agreeing to an offer to assist the terminally ill man across the hall with his suicide. Scott employs his friend Cozzo to help build the machine that will do it. But...
Regisserat av:

2
The Business End of Things 2013-01-24
The Business End of...
2013-01-24
When the guys second client deems their assisted-suicide operation amateurish, Scott drags his bumbling group to a business seminar, where things get even more unprofessional. Joey, meanwhile, still owes money to his lender and, as punishment, has to sadistically punish someone else.
Regisserat av:

3
The Be-All and End-All 2013-01-31
The Be-All and...
2013-01-31
Scott dances on the edge when he falls for Julia, his first clients beautiful daughter, but has to keep her from discovering his assisted-suicide business. Meanwhile, Cozzos wife, Debbie, becomes suspicious after finding Cozzos large wad of money. And the guys make a dirty old mans final wish come...
Regisserat av:

4
The Bitter End 2013-02-07
The Bitter End
2013-02-07
When Scotts troubles in the bedroom are exacerabated by his sexual harassment at work, he plans a special night for Julia. Joey falls off the gambling wagon and Cozzo has to pretend hes Jewish in order to satisfy a clients dying needs.
Regisserat av:

5
Dead End 2013-02-14
Dead End
2013-02-14
Scott and Cozzo force Joey to go to a gambling addicts group, only to have it backfire on their business. Cozzo decides to get healthy for his baby. Scott, in a desperate move to get Julia back, claims hes struggling with an addiction of his own - sex.
Regisserat av:

6
The End of the Beginning 2013-02-21
The End of the...
2013-02-21
After Julia breaks up with Scott, he decides to get away and suggests the guys splurge on a corporate retreat at a beautiful hotel in the country. While there, Cozzo faces his body issues, Scott hooks up with his ex-girlfriend and Joey meets his childhood hero, an 80s TV star who asks Joey to help...
Regisserat av: