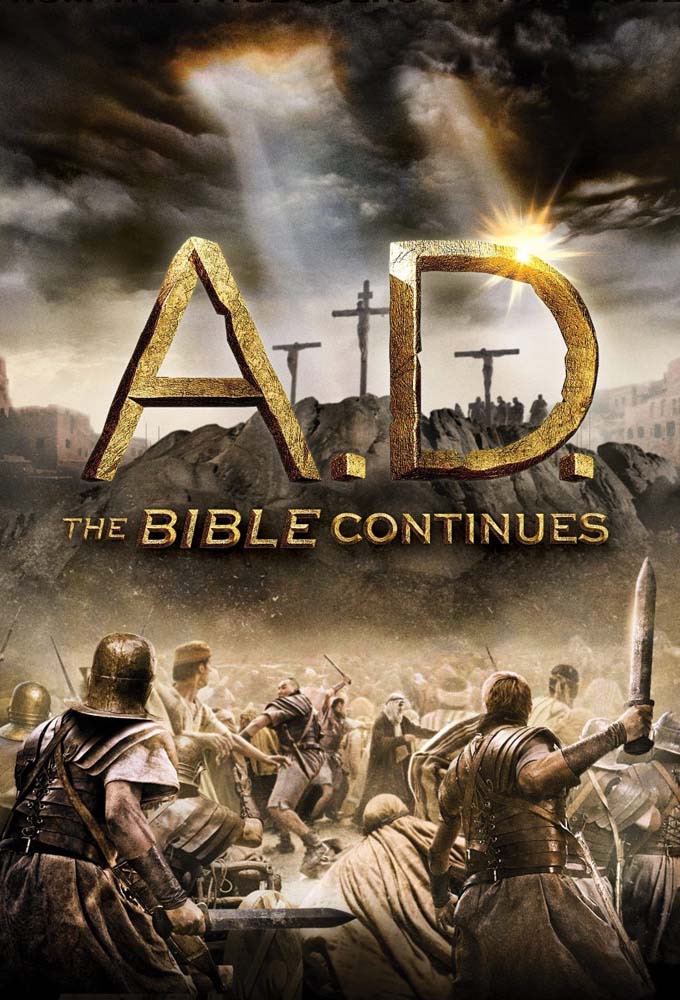 (2015)
Originaltitel: A.D. The Bible Continues
Skapad av:
Release: 2015-04-05
TV-bolag: NBC
Längd per avsnitt: 45 min min
Status: AVSLUTAD
As most of the world knows, the Crucifixion was only the beginning of the story. The immediate aftermath of Christs death had a massive impact on his disciples, his mother Mary, and key political and religious leaders of the era, completely altering the entire world in an instant. Watch as the disciples struggle to survive and share their beliefs, guiding us from the sorrow of Christs ultimate sacrifice to the awe-inspiring wonder of the Resurrection and beyond. (TheTVDB)
Drama Miniserie

1
SÄSONG 1

1
The Tomb is Open 2015-04-05
The Tomb is Open
2015-04-05
Peter and the disciples experience their darkest hour in the premiere of this miniseries that dramatizes the impact of Christs death on his disciples and the eras political and religious leaders.

3
The Spirit Arrives 2015-04-19
The Spirit Arrives
2015-04-19
Zealot revolutionaries try to assassinate Pilate during the festival of Pentecost. Empowered by the Holy Spirit, the disciples start to preach the Gospel. Caiaphas arrests Peter and John.

4
The Wrath 2015-04-26
The Wrath
2015-04-26
Pilate avenges the murder of a Roman soldier with mass crucifixions. Caiaphas fails to convict Peter and John. The church grows, attracting some with impure intentions who are punished by the Holy Spirit.

6
The Persecution 2015-05-10
The Persecution
2015-05-10
Having failed to silence the disciples, Caiaphas is challenged for the position of High Priest. He authorizes Saul to begin a bitter campaign of persecution against Jesus followers.

7
The Visit 2015-05-17
The Visit
2015-05-17
Sauls persecution intensifies as he targets Peter. Many flee the city, spreading the Word as they go. With Jerusalem in chaos the Roman Emperor arrives to decide Pilates fate.

9
Sauls Return 2015-05-31
Sauls Return
2015-05-31
Emperor Caligula demands that his statue be placed in the Temple. Pilate and Caiaphas know such desecration will cause rebellion. Saul returns a changed man.

11
Rise Up 2015-06-14
Rise Up
2015-06-14
James confronts Caiaphas and wins concessions for the disciples. The Zealot army grows but their Ethiopian backer turns to Jesus. When Peter resurrects Tabitha many more are drawn to His message.